Jurgen Klopp has made three changes to his Liverpool starting lineup for this afternoon’s return to Anfield to take on Crystal Palace in the Premier League.

The Reds are set for their first home clash of 2019, with Roy Hodgson’s Eagles their latest opponents in a much less congested run in January.

After overcoming a busy festive period, defeats to Man City in the league and Wolves in the FA Cup were followed by a hard-fought victory at Brighton last time out, maintaining a four-point lead at the top.

With City to play Huddersfield later in the weekend, victory over Palace could extend that to seven, at least temporarily, and ahead of an 11-day break and a training camp in Dubai, Klopp has named a strong side.

Alisson starts in goal, looking to record his first back-to-back clean sheets in the league since Boxing Day, having conceded against both Arsenal and City.

In defence, James Milner, Joel Matip, Virgil van Dijk and Andy Robertson will take to the field, buoyed by the latter’s commitment to a new five-year deal with the club.

And in attack are Sadio Mane, Roberto Firmino, Naby Keita and Mohamed Salah.

“Naby trained outstandingly well, so I like to show I see something like that,” the manager told LiverpoolFC.com of the Guinean’s inclusion.

Despite injuries to the likes of Joe Gomez and Dejan Lovren, Klopp still has a strong substitutes’ bench, including Xherdan Shaqiri, Adam Lallana and Daniel Sturridge. 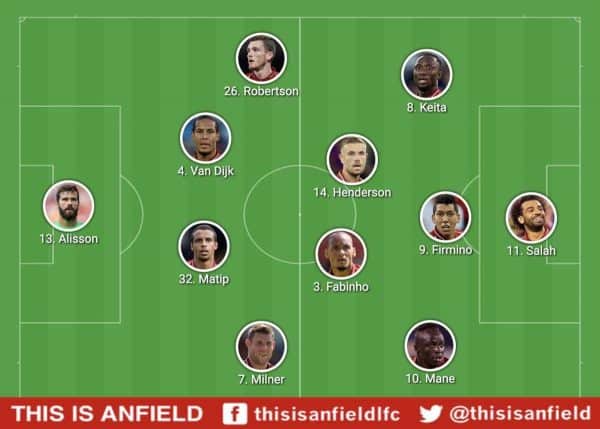