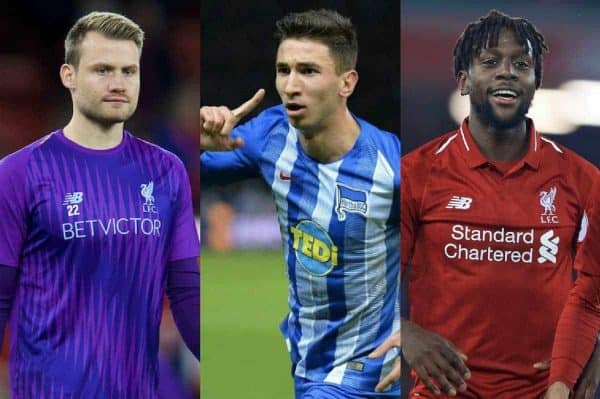 The latest on Simon Mignolet, Marko Grujic & Divock Origi at Liverpool in 2019

There is likely to be no movement for Simon Mignolet, Marko Grujic or Divock Origi in January, but the summer could be interesting for the Liverpool trio.

Grujic is currently undergoing rehab for a second ankle injury suffered on loan at Hertha Berlin this season, having established himself as a key player under Pal Dardai.

Meanwhile, Mignolet and Origi remain backup options for Jurgen Klopp, having clocked just 173 minutes between them for the Reds this season so far.

With the January transfer window opening on New Year’s Day, speculation has mounted over the futures of a host of Liverpool players, with Rafa Camacho touted with a move to Sporting CP.

But neither Mignolet or Origi are expected to leave, with next summer instead poised as one of change for the Belgian duo.

According to Het Nieuwblad, the club are “willing to cooperate” over a winter exit for Origi, but Klopp “does not intend to sell” Mignolet despite the goalkeeper’s desire to “visit other places.”

However, according to another Belgian publication Het Laatste Nieuws, while Liverpool would be willing to allow Origi to leave, he is in “no rush” to depart.

Instead, both he and Mignolet will wait until next summer to weigh up their options, with greater interest expected during the off-season.

Grujic’s future is likely to be in contention at the end of the current campaign, with Hertha previously expressing an interest in extending his loan deal into 2019/20.

Despite his injury issues, the Serbian has shone in his seven Bundesliga appearances so far, and scored his first goal for the club with the winner in a 1-0 victory over Eintracht Frankfurt in December.

But speaking to Sport Bild this week, Hertha general manager Michael Preetz cast doubt over any possibility of re-signing Grujic in the summer.

“There is no agreement with Liverpool on the loan after the end of the season. Liverpool want to put him in the position to be a supporting player,” he explained.

This serves as an interesting insight into Klopp’s plan for Grujic, who could return to Merseyside as another midfield option alongside the likes of Fabinho, Gini Wijnaldum, Naby Keita, Jordan Henderson and Alex Oxlade-Chamberlain.

James Milner‘s contract expires in 2020, while Adam Lallana could potentially move given his lack of game time, which may provide Grujic the opening to take up a “supporting” role.

Elsewhere on the rumour mill, claims that Schalke could rival Crystal Palace in their loan bid for Dominic Solanke have been dismissed already.

According to Sky Sports, the Bundesliga side are “denying any interest” in the striker, though they add that “reports Solanke has already completed a medical [at Palace] are premature.”

Adekanye was expected to sign a pre-contract deal with the Serie A outfit, but director of football Igli Tare could fly to England to complete a transfer—potentially with a view to the Dutchman joining in January.