Liverpool played out a frustrating 0-0 draw with Bayern Munich at Anfield, leaving it all to do in the second leg of their Champions League last-16 tie.

The Reds headed into Tuesday night’s clash with a host of absences, but Jurgen Klopp was able to name a strong lineup regardless, making just two changes to the side that won 3-0 at home to Bournemouth.

Taking on a familiar foe in Bayern, Klopp will have been eager to utilise the Anfield advantage before next month’s trip to the Allianz Arena, and was buoyed as Roberto Firmino made his comeback after illness the previous day.

The visitors, not at their best this season but formidable nonetheless, presented a big challenge, and it proved a difficult one for Liverpool.

You’ll Never Walk Alone drowned out the Champions League theme before kickoff, and the Anfield crowd kept it up in the early stages, with the stadium a veritable cauldron of noise.

It took a while for the game to get going, with Bayern sitting deep in a 4-2-3-1 and Liverpool’s 4-3-3 pressing high, challenging Manuel Neuer, who played a risky game in possession.

A brilliant long-range pass from Jordan Henderson saw Mohamed Salah draw a great save from the Germany No. 1, before we saw the best and the worst of Alisson, who kept Joel Matip‘s clearance out at point-blank range before dallying in possession to allow Kingsley Coman an effort on goal. 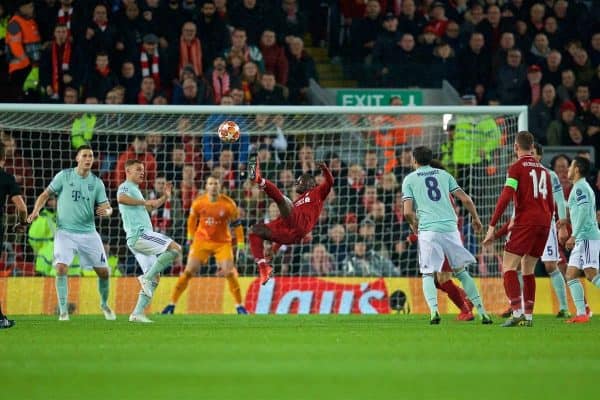 Joshua Kimmich’s running battle with both Andy Robertson and Sadio Mane saw the right-back pick up an early yellow card, which rules him out of the second leg.

Liverpool had a multitude of chances to go ahead as the half went on, with a top-class Naby Keita pulling the strings in midfield and Salah, Mane and Firmino all lively in the final third, but despite Matip going close the break came at 0-0.

A breakneck counter from the Reds saw Robertson’s persistence trouble Neuer early into the second half, while at the other end both Serge Gnabry and Kingsley Coman enjoyed more of the ball in the final third.

Bayern soon settled into a resolute defensive approach, however, with anxiety growing among the home crowd, along with the need for change from the substitutes’ bench.

The unlikely candidates were James Milner and Divock Origi, with Klopp overlooking the presence of Xherdan Shaqiri to introduce a blend of experience and enthusiasm.

A quiet period eventually saw Neuer produce a great stop to keep Mane’s stooping header out, but with Bayern looking to hold on and Niko Kovac utilising his substitutes wisely, there was little else for Liverpool to feed off.