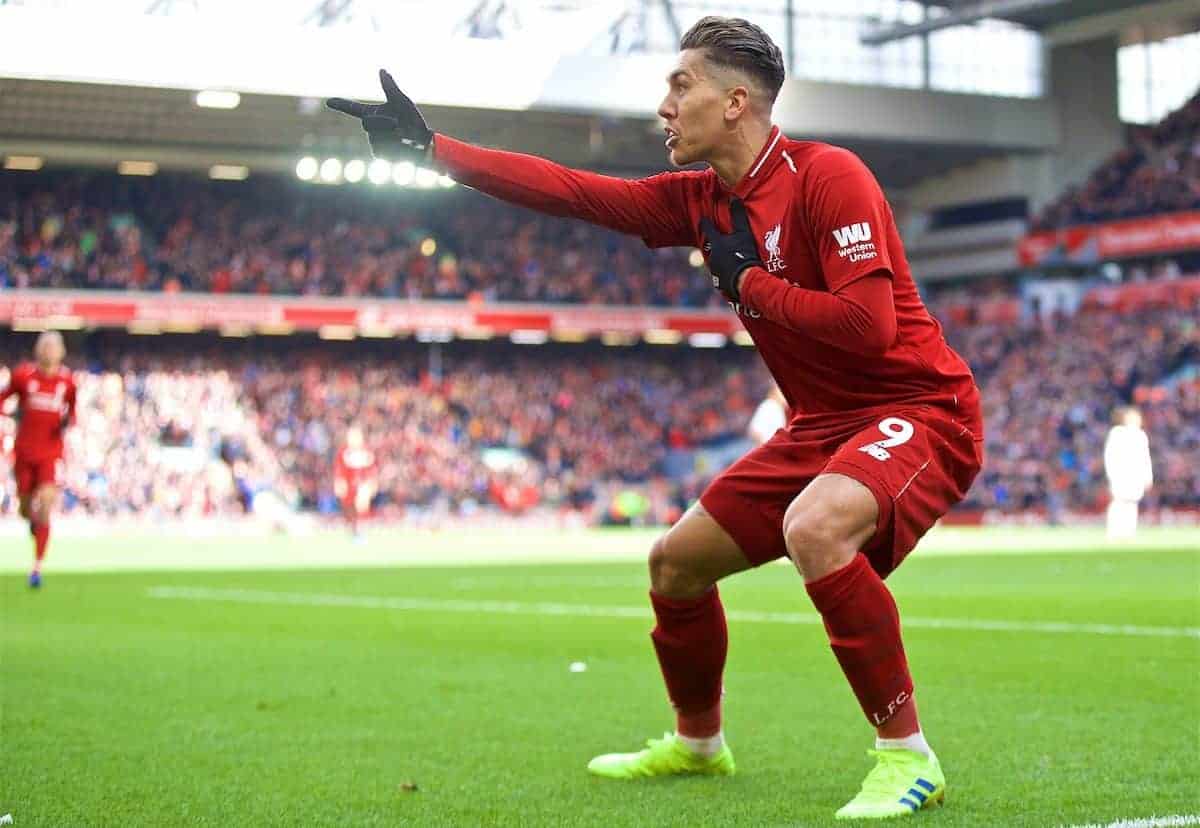 The media thought Liverpool proved their bottle for the title race and praised their character in Sunday’s 4-2 comeback victory over Burnley.

The Reds closed the gap on Man City back down to a single point to keep dreams of Premier League title glory alive.

It was a vital result on a day victory was everything, and Klopp will also be pleased with his side’s display against physical, awkward opponents in extremely testing conditions.

Here’s how the media reflected on a victorious afternoon at Anfield.

The Evening Standard‘s David Lynch felt the Reds proved they have the right mentality, and believes that even if the title doesn’t come to Anfield it will be nothing to do with a lack of mental strength:

“Four points behind, trailing to a goal that should have been ruled out, and playing in difficult conditions, it would have been easy for the Reds to go into their shell here and let City run away with it.

“But they responded, as they have done so many times when doubts have been raised this season. If Klopp’s team don’t win it this season, it would not be fair to suggest that a lack of mental strength had anything to do with it.”

ESPN’s Glenn Price assessed Liverpool’s response to falling behind as not one of a team struggling to deal with the pressure of the title race:

“The hosts’ response was not one of a team feeling the pressure of a title race in the closing stages.

“Liverpool and their supporters still believe it is possible to overcome the reigning champions.”

The Mail’s Ian Ladyman thought Liverpool did well to come through with victory on a day where several factors conspired against them, and therefore thinks the result could prove a crucial one come May:

“At this stage of the season, these things can make a difference if you let them but here Liverpool did not do that.

“They found a way back in to the game and found a way to win. As such, this could turn out to be a significant afternoon in the context of their season.” 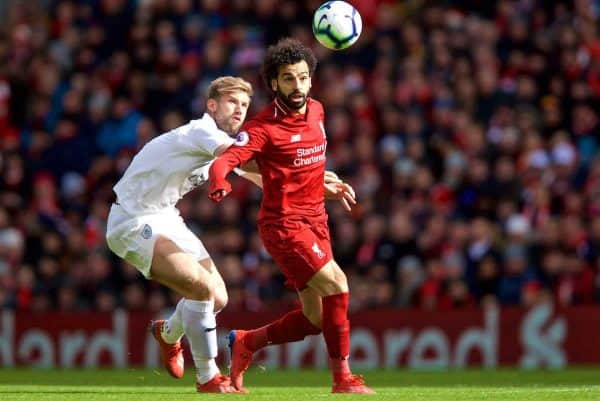 Meanwhile, the Independent’s Simon Hughes thought the performance showed that the Reds are better suited to chasing rather than leading the pursuit of the title:

“The gap is narrowed again to just one point and perhaps being in pursuit of the top rather than being chased suits Liverpool best.”

The Mirror’s Andy Dunn felt the Reds’ composure and relentless pursuit of victory will have struck some fear into City:

“Sunday’s 4-2 home win over Burnley was never a breeze, but it was the sort of riposte that should at least send a draught of pressure down the road to Manchester City.

“Forget the chat about tightening nerves on Merseyside, this is a Liverpool team that is taking the title race down to the May wire.”

Reporters were impressed by the manner of Liverpool’s comeback, praising the Reds’ desire and composure… 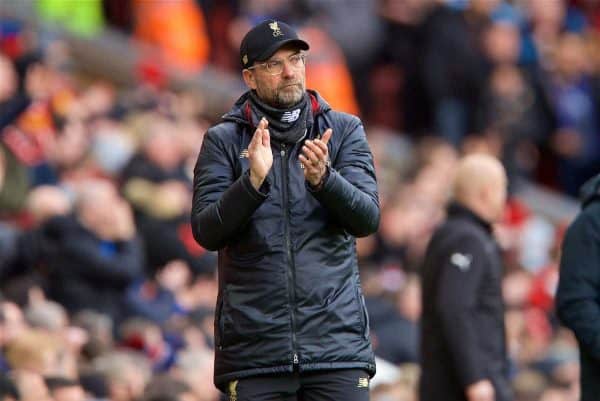 The Liverpool Echo’s James Pearce praised the Reds’ maturity as Klopp’s side “refused to be blown off course” in difficult conditions:

“As the rain lashed down and the wind wreaked havoc inside Anfield, Liverpool simply refused to be blown off course.

“The discipline, maturity and control which has carried the Reds this far all came to the fore. There was no hint of panic.”

The Mirror’s David Maddock praised Klopp’s side for still playing “brilliantly” despite the testing conditions:

“So going a goal down to a tough Burnley side in appalling weather conditions really was a test for them—and one which they passed with flying colours.

“The Reds played brilliantly at times, and showed real hunger and desire to overturn that deficit. It augers well for the title run-in.”

This is Anfield’s Karl Matchett explained what exactly Liverpool did so well to launch the “impressive response”:

“The response was impressive, though, in a measured and calm way rather than an all-out-blitz: lots of possession, more movement than has been the case at times and all three forwards looking to link up with each other with regularity.”

The Independent’s Mark Critchley noted the Reds’ impressive ability to respond to setbacks this season, and thinks this shows Klopp’s side have the character to go all the way:

“For a side whose mentality is so regularly questioned, Liverpool are becoming adept at digging in and responding to adversity.

The watching journalists were all impressed with Adam Lallana’s performance…

Maddock thought Lallana’s selection worked well all round, assessing Klopp was “wise” to pick him and that the midfielder “justified” his selection:

“The first half showed it was a wise, mature decision from the manager. Lallana’s energy in the press was vital to Liverpool, giving them an important momentum.

Goal’s Peter Staunton labelled Lallana’s performance as “excellent” and thinks he can provide “another dimension” in the final eight games:

“Lallana over the course of the last eight games can help bring another dimension to Liverpool’s play.

“While his contributions on the ball were clever and creative at times against Burnley, it was when becoming the first line of the press that Lallana did his best work.

“No player regained possession more for Liverpool during Lallana’s time on the field nor made more tackles and it was his brave interception off a Burnley clearance which helped put Sadio Mane in for the crucial second goal.”

Price thought Lallana showed that Klopp has been right to select the England midfielder over Naby Keita and Xherdan Shaqiri, the more fancied options among the fan base.

“Adam Lallana delivered a timely reminder that there is still life left in his Liverpool career.

“His performance justifiably saw Naby Keita and Xherdan Shaqiri sit on the bench.”

Hughes labelled the No. 20’s performance “easily one of the best by any Liverpool midfielder” this season and explained how he provided what Keita was supposed to:

“The midfielder’s display was easily one of the best by any Liverpool midfielder this season, full of twists and turns; zeal and creativity.

“Lallana, indeed, did a lot of the things Keita was brought in to do but insofar hasn’t really been able to.”

“They felt more vibrant in a comeback forged by energy. They created havoc with their running.

“They were epitomised by two fervent pressers. Klopp recalled Adam Lallana and a fit-again Roberto Firmino. Each excelled.”

There was also praise for Liverpool’s attackers, in particular Mane for another decisive display…

Lynch was full of praise for Mane for taking on the goalscoring burden in Mohamed Salah’s downturn:

“That Mane is doing this during a period where Salah’s goals have dried up has been crucial to keeping Liverpool in the title race.”

Matchett thought a big positive of the day was Firmino getting back on the scoresheet, with the Brazilian needing to rediscover confidence in front of goal for the run-in:

“Getting Roberto Firmino back on the scoresheet could prove vital; the No. 9 has been below his best over the course of the season but he got himself into the most goalscoring-est of positions—if we can invent that word—to end a lean run, tapping home from all of about one yard out.”

Discussing what inspired the excellent performance, Staunton said that Liverpool always look at their best when Klopp goes with the traditional front three setup:

“Liverpool’s traditional attacking trident under Klopp—with Mane wide left, Salah wide right and Firmino through the centre—hasn’t always been apparent this season as the manager seeks to find other solutions which are not so easy to predict.

“But in this shape Liverpool look and feel better and provide more of a threat too.”

Certain journalists offered some alternative thoughts from the victory… 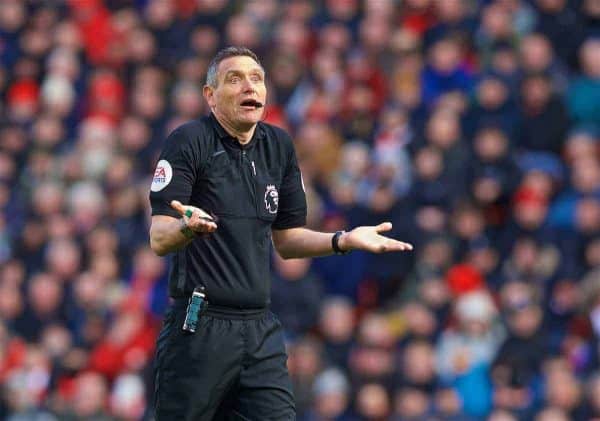 Several reporters, including Critchley, discussed the poor decision for Burnley’s first goal and expressed concern that the title race could be decided by inept officiating:

“The goal was a reminder that at this late stage of the season, there are factors we cannot account for which could decide a title race as close as this one.”

The Telegraph’s Chris Bascombe thought Liverpool’s performance was the most encouraging thing as the Reds showed signs of top form again:

“Liverpool were close to their best to negotiate one of those notoriously hazardous home fixtures—the sedate noon kickoffs not known for quickening the pulse.”

Pearce thinks Liverpool are rediscovering their counter-attack threat as the right time, ahead of the Champions League last-16 second leg against Bayern Munich:

“They are looking more potent on the counter and that’s a positive sign as they chase a precious away goal.”

Maddock praised Salah for “responding in style” by producing an excellent performance despite not scoring:

“Against Burnley he showed appetite and desire for the game and created so many problems for Burnley. In fact, you wondered why the visiting side were so respectful of him, because the space they gave to the Reds talisman was a key factor in the game.

“He was slaughtered for his display at Everton last weekend, but on another day would have scored three. That shows he’s still making the runs and still has belief—a fact confirmed here.”

And finally, ahead of two crucial away games, Matchett challenged Liverpool to bring this goalscoring form into the big games and improve form on the road:

“Now there are two key questions: can this form in front of goal be shown again in the bigger matches, where it has been missing recently? And, can away form be upped considerably?”