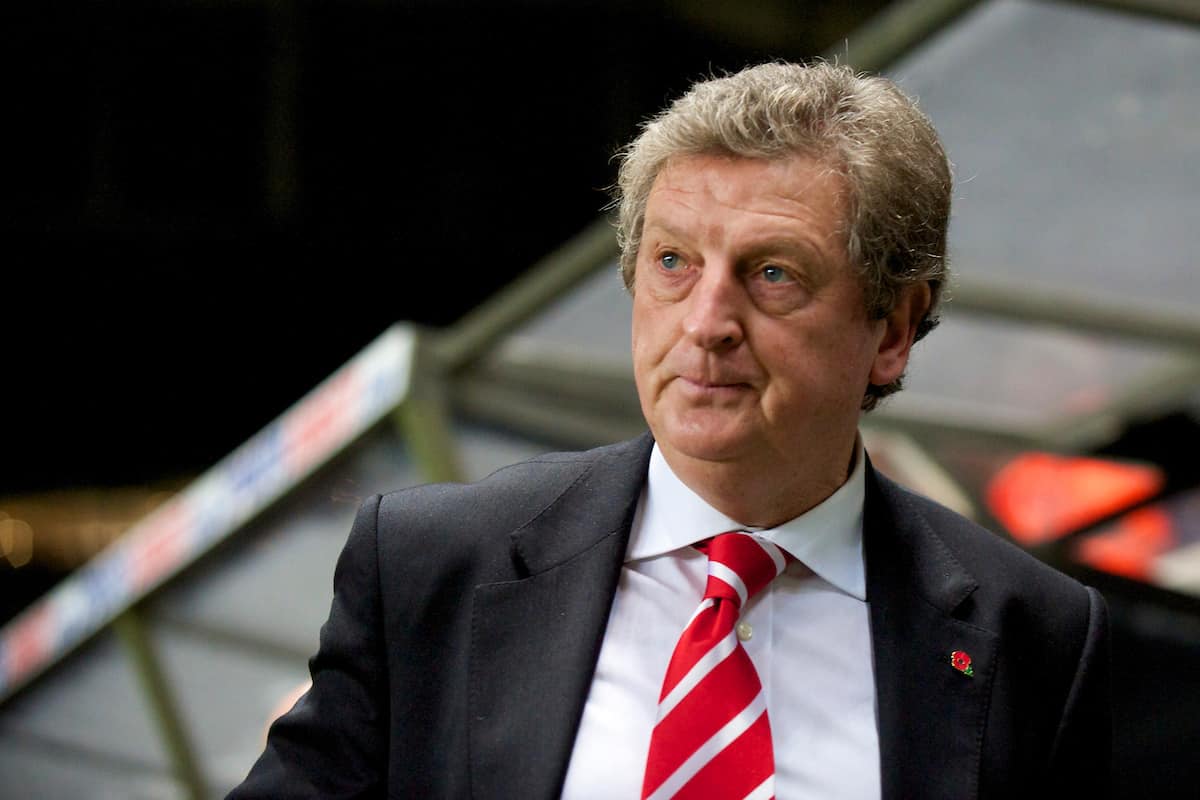 Fulham‘s official matchday programme recently published a sarcastic take on Liverpool fans’ treatment of Roy Hodgson, which is far from the reality and laughable to say the least.

Where do you start with Fulham?

The first promoted side to the Premier League ever to burn through more than £100 million. Eye-watering spending, somehow acquiring talent such as the likes of Jean Michael Seri along the way.

Yet destined for immediate relegation, it very much seems.

Why does this matter? Well, the Cottagers will soon be hosting Jurgen Klopp’s title hopefuls and, to take their minds off apparent imminent doom, the club opted to resurface a grudge they’ve clearly been harbouring for several years.

In their recent match day programme the creative bodies at Fulham decided to recount the reasons why their once messiah Roy Hodgson should not have departed west London for Merseyside.

“Having taken the Whites to the Europa League Final, Roy was voted LMA Manager of the Year in 2010.

“He was nevertheless given a frosty reception on his subsequent appointment at Liverpool, with fans being unmoved by his success with smaller provincial clubs like Inter Milan,” read the article.

“Realising that Roy was not going to win the league immediately and angered by his failure to buy the world’s best players, who would obviously jump at the chance to sign for the team that had dominated Europe a mere three decades earlier, fans quickly lost patience.

“Demonstrating the cool-headed pragmatism that has endeared them to the footballing public, the Liverpool faithful demanded Roy’s replacement be an exciting young manager befitting the club’s stature.

“Setting the time circuits to 1991, the club’s executives piled into the waiting DeLorean and floored it to ’88, returning with a fresh-faced and energetic Kenny Dalglish, ready to usher in a new era of dominance spearheaded by future club legend Andy Carroll, a shrewd purchase at just £35m.

“Unfortunately, however, Alex Ferguson and Wayne Rooney recovered the time machine, went back to 1991, stole the Sports Almanac and brutally laid out Jan Molby at the ‘Enchantment Under the Sea’ dance.

“This left the club with no option but to drag present day Kenny out of the pub and into the dugout, skewing the timeline and culminating in an underwhelming eighth-place finish and Kenny’s departure (again).”

Bizarre, I know. But the nibbling fear of relegation does strange things to a club.

Among the multiple snarks and jibes the Cottagers accused Reds of not being convinced by a manager who took charge of ‘smaller provincial clubs like Inter Milan.’

Further sarcasm-laced paragraphs followed, almost as if the chaps over by the Thames really did need to get something off their chest.

A dig was made at Liverpool’s lowly standing pre-Hodgson, and an unwillingness from any top players to sign.

Granted, they probably weren’t wrong there. But what an unusual argument to make. In their keyboard-bashing delirium they proceeded to make a swipe at King Kenny, and at this point it all gets a bit out of hand.

He gave that mob a fantastic season, an excuse to book several away-day flights for the first time in seemingly ever – wrap up their prawn sandwiches in foil, cork the Prosecco in a hip flask and make off for long trips to far foreign lands. All very lovely.

However, that’s besides the point. Well done Roy, and all that. Was he – however – supposed to come to Liverpool and progress from these exploits and enrich the sleeping giants of Merseyside with the new elite level experience he had gleaned, against all odds? Yes. Absolutely.

Did he? Not even slightly my friend.

If you rock up to the biggest gig of your career and place a peace offering of a neatly wrapped up Paul Konchesky on the table, then pursue a move for Carlton Cole, you’re going to get laughed out of the place.

Imagine then following that up with Christian Poulsen? Christ almighty. Likewise, the unveiling photo at Anfield containing Milan Jovanovic, plus Danny Wilson and a tired-looking Joe Cole still haunts me, you know. It probably does you also.

The thing Fulham should have understood, but obviously never will, is that Hodgson was not coming to Anfield to be judged by their standards.

Fair enough, European Cup runs provide dizzying highs which last a lifetime. They’re beautiful, high-octane thrillers which ignite the senses even decade later. But Fulham’s Europa League run was all but a distant memory by the time Hodgson realised the water was up to his ears at Anfield.

Kopites were irked upon Hodgson’s arrival. Sure, it didn’t help the poor bloke that a Champions League winner had been ejected just before him, but the whole appointment itself just screamed lacklustre. He was, contrary to popular opinion in London, given a fair crack at the whip.

No Liverpool fan ever wants a manager to fail, regardless of whether their appointment is met with excitement, or not. The Reds were headed for the doldrums and nobody wanted that. Hodgson HAD to be different, the Kop would lend him the hand needed.

Yet after a few disjointed performances, and a few more, Hodgson opted to come out with the priceless little gem: “We were unbelievably over-staffed when I came to the club and, if the truth be known, we still are over-staffed.”

Alright, that’s fairly sound, happens to a lot of managers. But imagine saying that when the aforementioned Konchesky and Poulsen are making themselves at home, Fabio Aurelio has just been re-signed after having already been let go and new-boy Jovanovic is going about his business of proving to everybody he’s not actually a footballer.

It was madness, nothing made sense. Hodgson brought in Raul Merieles who had a solid performance in his locker when he wanted, but that was all we had to go off.

“Don’t worry though, lads,” he may as well have said. “Soon I’ll have disillusioned one of the best strikers the club has ever had to the point he’ll sign for a bitter rival… that will trim the hefty squad”

Honestly, at times, I don’t blame Fernando Torres for packing his bags.

Compare that to now, it’s absolutely terrifying. In a sense it makes this season all the more special, and spikes frustration tenfold when Twitter’s teenage minions cry out passionately as the Reds go one point behind arguably the best team to ever grace the Premier League – having lost just once all season.

It’s only eight years since the Hodgson days, he was given the bullet in January 2011. Back then, if you’d have told me within the next ten years the Reds would pick themselves up – get back into two major European cup finals and fight for the title like never before, I wouldn’t have believed you – not even slightly.

“They’ll be a formidable challenge,” Hodgson said in the September of his six months tenure…

Who was he speaking of, you ask. Chelsea? Bitter foes Manchester United? … Northampton Town.

Northampton bloody Town. Honestly, just shoot me now. That was the thinking at the time, and it’s still barely funny even now. The comment from Hodgson was one in passing, but it reverberates back across his Anfield legacy and shall do forever more.

Hodgson truly made a rod for his own back following the defeat in the Merseyside derby, after which he decided to come out with the masterful line of: “To get a result here would have been Utopia”…

Oh, how many a Toffee loved that one. When Liverpool Football Club has become the comedy act of the city, you know something is going badly amiss. Thankfully order has kindly been restored, as the Blues continue about feverishly celebrating their recent 0-0 victory.

“[It was] as good as we have played all season,” Hodgson continued in his digest of the derby defeat, presumably multi-tasking by answering the question and furiously digging his own grave.

If you come to Anfield and start poorly, continue poorly, and oversee a team you were supposed to breathe new life into slump down to 19th, there’s only ever going to be one ending.

Look, let’s be fair – is Roy Hodgson a good football manager? Yes, he is… at a certain level.

Crystal Palace, West Brom and Fulham? For sure. Liverpool and England? Afraid not.

He’s one of the most well-travelled coaches in the world, has vast experience and an infectious love of the beautiful game. Tactically he knows his way around a Premier League fixture – as he showed all too stunningly by putting Pep Guardiola’s lot to the sword at the Etihad in December and serving up a shock of the season.

Cheers again for that, Roy. Repeat performance on April 14th please and I’ll personally chip into Fulham’s crowdfunder for the statue of you they’re evidently so desperate to erect.