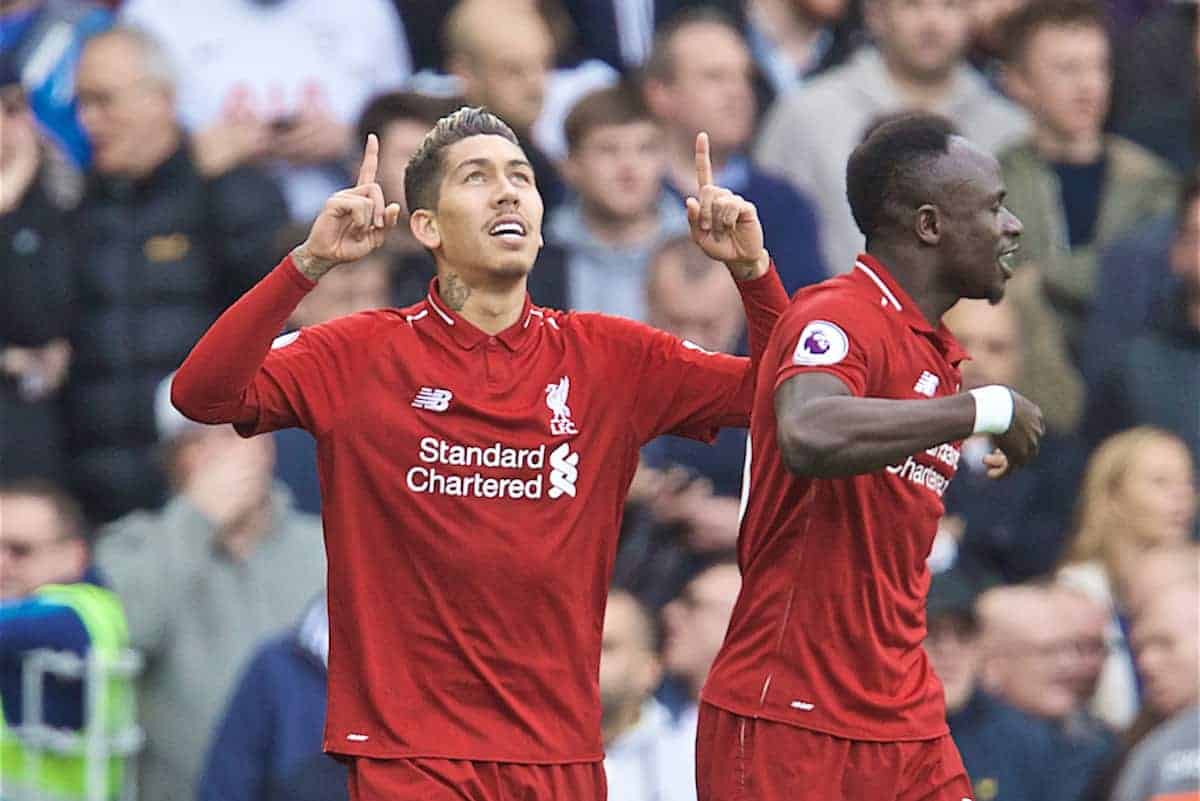 Liverpool secured a dramatic 2-1 victory over Tottenham to move back to the top of the Premier League table, sending supporters into raptures at full-time.

The Reds made a winning return from international duty, but it was anything but smooth sailing for Jurgen Klopp‘s men.

Roberto Firmino got Liverpool off to the perfect start after latching onto a pinpoint delivery from Andy Robertson, but sloppy play and a lack of a clinical edge in the final third invited the visitors into the game.

Tottenham then proceeded to dominate the opening stages of the second half as Liverpool struggled to grab a foothold in proceedings, which ultimately led to the visitors’ equaliser through Lucas Moura.

The state of play made it appear as though the Reds were set to leave Anfield with a point, only for Mohamed Salah to force a mistake as Spurs bundled the ball over their own line to hand Liverpool an invaluable victory and a place atop the league table.

Here’s how supporters reacted to the dramatic victory on social media and on our forums.

What a delivery from Andy Robertson. Sensational from the #LFC left-back. Puts the opener on a plate for Roberto Firmino

“Bobby’s our main man. When he plays well so do we.”

Brilliant delivery from Robbo, 9 assists in the league so far. Incredible.

Bobby Firmino class in that first half. ?

Absolutely inch-perfect delivery from Robertson and a lovely finish from Firmino. Yet another goal supplied by the quality of Liverpool’s full-backs.

But Fabinho & Van Dijk were handed widespread praise for their efforts…

??? That defending by Van Dijk, one against two.

Arguably better than any attacking Liverpool have done all season long. Utterly fantastic.

Can't believe Fabinho did not start that game… but all's well that… you know the rest.

The way Virgil handled the late two-on-one was absolutely sublime. Made the call under pressure to send weaker option Sissoko on goal, blocking pass to Son yet still getting in a challenge. Best in the world, not a debate any more, #LFC pic.twitter.com/byU6UErM0c

Virgil Van Dijk is the best defender in the world. That 2 on 1 scenario, that’s the stuff made of dreams.

One of the moments of the game is 1000% when Van Dijk simultaneously covers out Son as an alternative to pass and pressures Moussa Sissoko to shoot (that went way over) in a 2v1 situation.

Jurgen I absolutely love you mate – but start another game without Fabinho we’ll need to have words :-) #LFC

Fabinho surely has to start the remaining games this season. Midfield is infinitely better when he’s on the pitch.

Fabinho did more in today’s cameo than the rest of the midfield put together.

He has to start all of the remaining games.

Massive result, that. Can't believe we pulled out a goal of the season contender when we needed it most.

Fucking Liverpool. Fuck off everyone else. YES

“Was a nervous wreck watching liverpool play. I swear one of these days someones gonna get a heart attack with all the drama going on. Come on reds. Here we go again.”

Is that one of those defining moments? Sure feels like it. immense #Willnotgoaway #LFC

Not at our best but still winning games. I absolutely adore Liverpool Football Club.

Horrible. Absolutely stomach-churning horrible. Response of true character, get it any way you can. Full-backs sublime in opening stages. 400 goals under Jurgen Klopp and probably few as important. Liverpool, top of the league. #LFCdigest