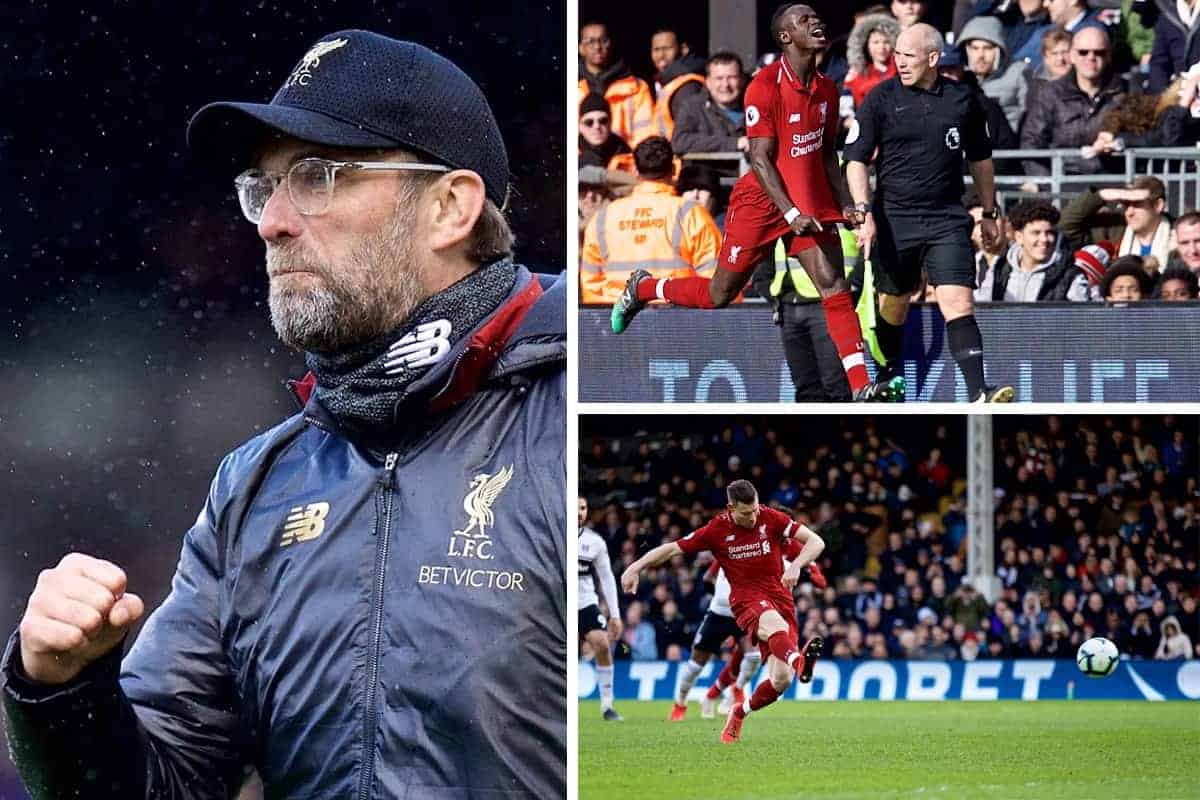 Liverpool needed a late penalty to snatch victory at Fulham. It wasn’t a vintage performance, but all that mattered was the three points.

There was a touch of sadness pre-match. Fulham and Liverpool paid their respects to Zara Harrison, a Cottagers club employee who also was a Liverpool fan.

As the fixture got underway Liverpool’s intent was clear. The Reds went in search of a quick goal after their sublime display in Munich midweek.

Andy Roberton brilliantly skipped past Fosu-Mensah and into the box, but his cross could only find the arms of Fulham goalkeeper, Sergio Rico.

For a side threatened by relegation, the hosts were playing an open expansive game—not a deep-lying, handing over of possession that we have seen sides employ against the Reds of late.

It was an ex-Liverpool player that emerged as the most dangerous man in white. Ryan Babel stretched his legs and began to give the Liverpool midfield and defence a run for their money.

However, it was the Reds that struck first and it was the man of the moment who smashed the ball into the net. Sadio Mane followed up his goals at Bayern with yet another in the Premier League.

The Senegalese striker notched his ninth goal in nine league games after some wonderful work from Roberto Firmino. The Brazilian cut the ball back to Mane who only had one thing in mind—Liverpool were ahead after 11 minutes.

For the remainder of the half the Reds created opportunities, but once again it was the final ball that lacked quality and allowed Fulham to remain in touching distance.

A yellow card for Fabinho just before half time almost became red moments later. Fired up, the midfielder just needed to relax—Liverpool could ill-afford to go down to 10 men.

The second half started with the same energy as the game opened with. Firmino almost added to the scoreline before Robertson again fired in a dangerous cross, but the Scot was unable to find a red shirt.

Liverpool’s joint-top scorer, Mohamed Salah, was having another frustrating day in front of goal. The Egyptian seems to be preoccupied with a lurking record of hitting 50 goals in the fastest time.

On two occasions the forward opted to shoot when a pass seemed the better option and, when he did finally break clear, it was a timid shot that left his foot—a routine save for the Fulham ‘keeper when he should have been seriously tested.

Then, as Liverpool looked comfortable, a catalogue of errors allowed Fulham to draw level.

James Milner skied a clearance that Virgil van Dijk failed to take charge of; the Dutchman’s weak header back to Alisson was then fluffed by the Brazilian and Babel nipped in to send the home fans wild.

The ex-Red midfielder had been a thorn in Klopp’s side all afternoon, though he refused to celebrate his goal.

Thankfully, the scores only remained tied for seven minutes before Fulham had their own mistake to dwell on. Sergio Rico manhandled Mane in the area, dragging him to the ground after he had fumbled an easy save.

The ball was moving away from goal and it was an absolute gift—and one the Reds took full advantage of. Milner made up for his earlier error as he dispatched the penalty with speed and venom.

It wasn’t a vintage performance but all the history books will show is three points—exactly what Liverpool needed to retake the Premier League‘s top spot.

Speaking after the game, Jurgen Klopp was adamant that this side has no nerves:

They (Fulham) deserved a goal but we deserved three points. A brilliant afternoon I have to say. I am not in any doubt about my players’ nerves. It is about intensity. We go for perfection but it is rare that you get it.

An international break awaits, before the Reds return to Premier League action on 31 March, when they welcome fellow Champions League quarter-finalists Tottenham Hotspur to Anfield.