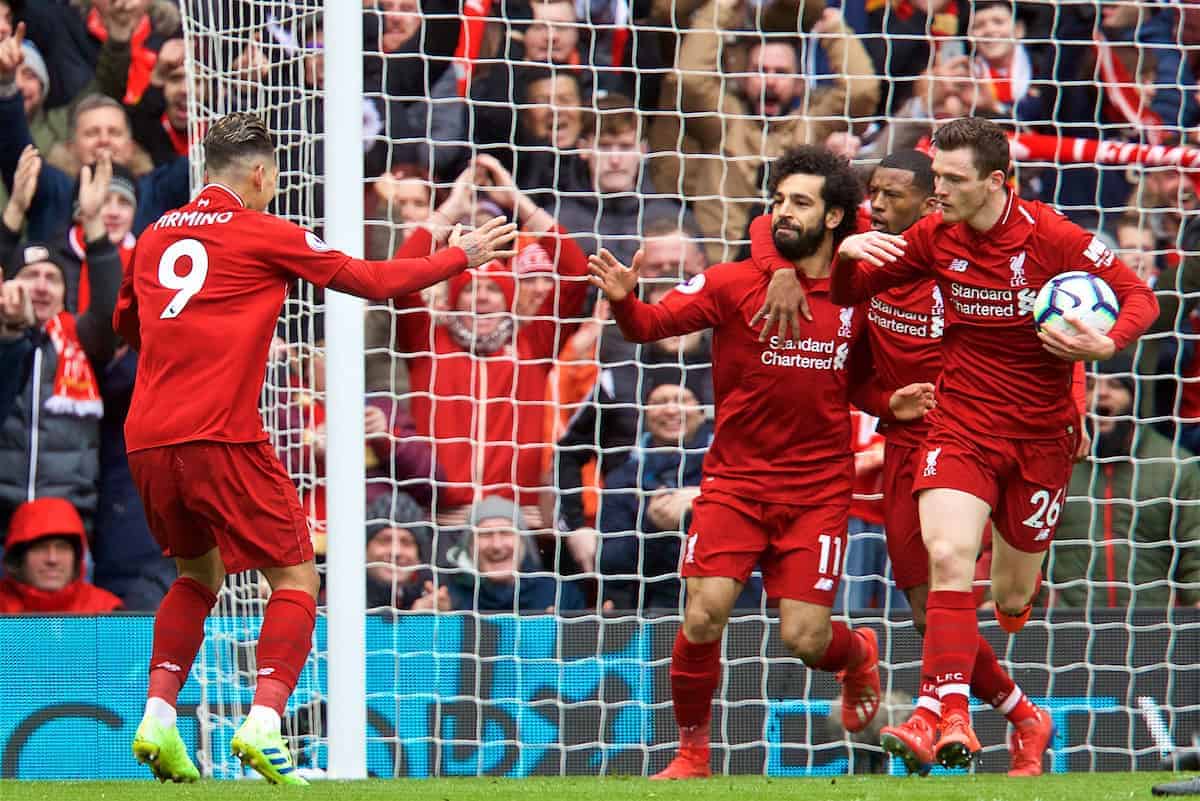 Liverpool fought back from an early upset to seal a 4-2 victory over Burnley, remaining just one point behind Man City at the top of the Premier League.

The Reds conceded their first league goal since the start of February when Ashley Westwood’s corner evaded Alisson, who was pinned down by two Clarets players.

But a brace from Roberto Firmino and a well-taken strike from Sadio Mane gave the hosts a comfortable lead, with Mohamed Salah pushing for a record 50th strike in the English top flight for Liverpool.

It wasn’t to be for the Egyptian, and his side endured a late scare as Johann Berg Gudmundsson beat Alisson to make it 3-2, only for Mane to polish off the game with a tap-in on the break in stoppage time.

On a wild afternoon at Anfield the result was all that mattered, and the Reds have now kept the pressure on City in the title race.

Referee Andre Marriner came in for criticism for the opener…

I know we joke about how you can’t go within a foot of goalkeepers in the box, but in what universe is that NOT a foul on Alisson? Andre Marriner is looking right at it! #LFC

“Their first goal was sad refereeing! Outfield player gets a free for being jumped on. Bring on VAR!”

Andre Marriner fully convincing me today of why VAR needs to be used in football….

Lallana returned to the side and produced an impressive display…

Adam Lallana the pick of Liverpool’s midfielders so far. Fairly scrappy game in the middle of the park but his work rate and pressing has been excellent.

Keita on for Lallana, who gets a great ovation.

Deserved, too. Not the most popular inclusion (on Twitter), but he's been really good today Lallana.

Excellent performance from Lallana. Proved me wrong. There’s life in the old dog yet.

Unlike a lot of people on here, I love being proved wrong by players. Really glad he’s made me look stupid.

“Where’s all the Lallana haters?

All for 2016 Adam Lallana making a return

If Adam Lallana can stay fit, LFC have a huge addition for last few games on this evidence.

“The player we need to be in form the most is Bobby and today he was more like his old self. When Bobby plays well so does Liverpool.”

Mane’s recent scoring run absolutely priceless. Lallana defiantly answering his post-derby critics, when on song he offers so much to this side. Liverpool stay right in it. #LFCdigest

Sadio Mané has eight goals in his last nine starts. Started firing for us when we needed it most. pic.twitter.com/UfTAJhvC7t

Mane is going to win us the league

And fans’ hopes were retained in the title race…

@LFC 4 vs Burnley 2
The reds do the job and keep on the fight to the trophy, no matter what the people say. Yes, they still on race !! #YNWA

“Let’s keep this up and hope City mess up. Have faith Reds YNWA.”

These Reds are bottling nothing. Responded twice to conceding and got the job done. 8 to go and it doesn't matter how we win – just win GET IN REDMEN!!!

“3 points is all that matters atm. Needed to stay in touch with City and we did just that.”