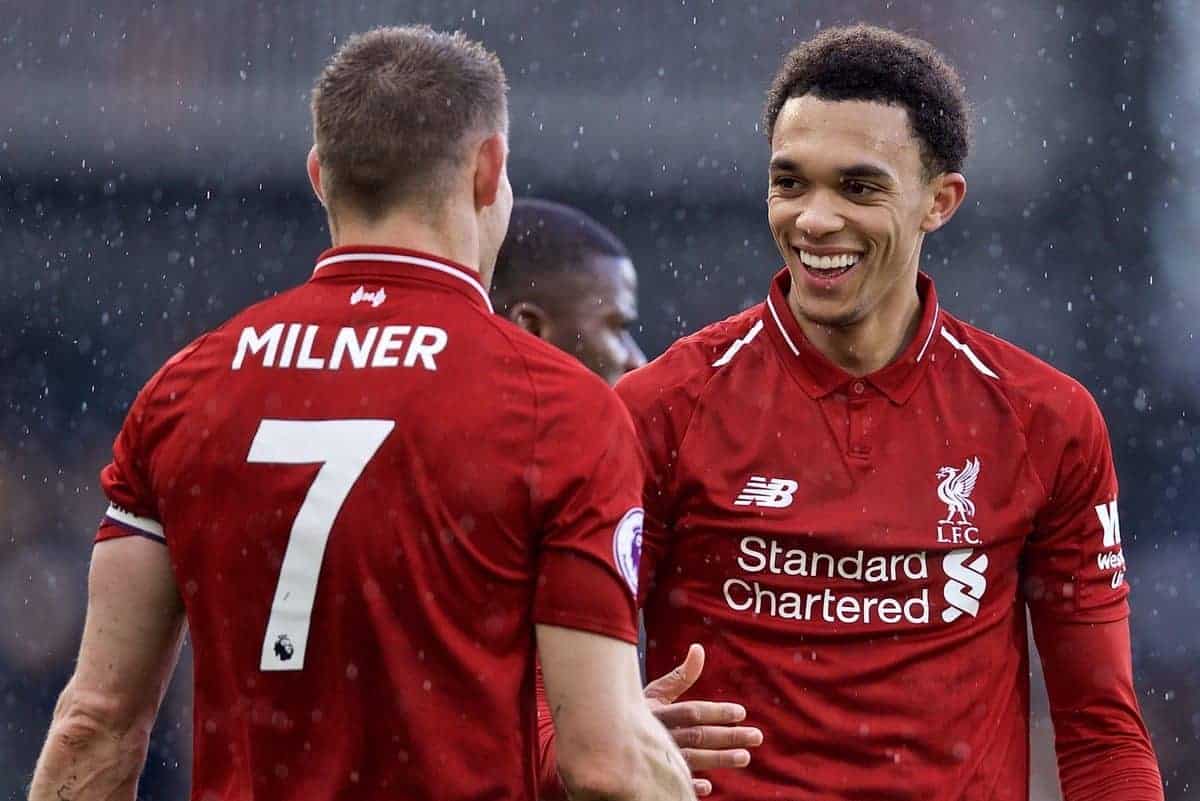 James Milner was lauded by his Liverpool team-mates after his late penalty secured a dramatic 2-1 win at Fulham on Sunday afternoon.

After two hard-fought battles against both Burnley and Bayern Munich, the Reds’ intense week of fixtures was to end against Fulham, with a place at the top of the Premier League table on the line.

Despite looking somewhat lethargic in the opening exchanges Liverpool were in complete control of proceedings, and Sadio Mane’s 11th goal in as many games ensured it was reflected on the scoreboard.

However, the inability to extend the lead left the door ajar for Fulham, and namely Ryan Babel as the former Red capitalised on a rare and bizarre series of errors at the back.

A spot-kick late on saw Milner restore Liverpool’s lead, and despite the dramatic nature of the victory collecting all three points was all that mattered to Virgil van Dijk.

The centre-back acknowledged his mistake for the home side’s goal when speaking to LFCTV, where he also voiced nothing but enthusiasm for the high-stake games which lie in wait:

“It’s one of those situations where you try to head it back. The ball was a little too short and it was a difficult ball to get, and Ryan was good to intercept the ball and score the goal.

“It gave them some belief but obviously that happens sometimes in games. Mistakes are a part of football, you have to take it and I will as well.

“I think we made it pretty difficult for ourselves with the goal we conceded obviously, but in the end we got the three points and that’s what matters.

“[Liverpool’s position in the league and Champions League is] not bad, no. The media makes it sound even negative sometimes!

“It’s a fantastic position that we are in and we have to enjoy it but you know we want to go all the way.

“It’s going to be tough because Manchester City are fantastic and the Champions League is very tough like we know, so we’ll see. We will take it game by game.”

Andy Robertson echoed the Dutchman’s view of the game but was also quick to heap praise on Milner after the versatile midfielder calmly steered Liverpool to victory:

“Massive [three points] for us. It would have been a bit gutting if we never got the three points, if I’m honest.

“First half we dominated them and even the second half we were very much in control until probably the unexpected mistake.

“But these things happen and it’s all about how we bounce back, we had chances before then but luckily we got the penalty and Milner put it away.

“[Milner’s] the most experienced guy in our dressing room and he’s got the trophy we’re all fighting for, he’s already won it, so his experience is crucial for us.

“He practices them every day and when he steps up he’s confident and he put it down the middle and sent the keeper to one of the sides, so fair play to him.

“We all had belief in him and luckily that was enough for us today.”

The man himself took to Instagram shortly after the game to poke fun at his eventful 18-minute cameo, where Trent Alexander-Arnold was also eager to commend Milner’s “nerves of steel”:

Van Dijk, Mane, Robertson and Roberto Firmino also got in on the action as they celebrated collecting another vital three points:

While Adam Lallana, Fabinho and Gini Wijnaldum all commended Liverpool’s “fighting” spirit as another “massive” week of fixtures came to a close:

That feeling when you get the job done ? massive effort from everyone this week and so pleased we got the rewards. Safe travels home to all our supporters – never stopped believing ? #YNWA

Another great win, boys. Fighting till the end! ??#YNWA

The international break now awaits, where Jurgen Klopp and the Liverpool faithful will be desperate for the entire squad to come through unscathed ahead of Tottenham‘s visit at the end of the month.