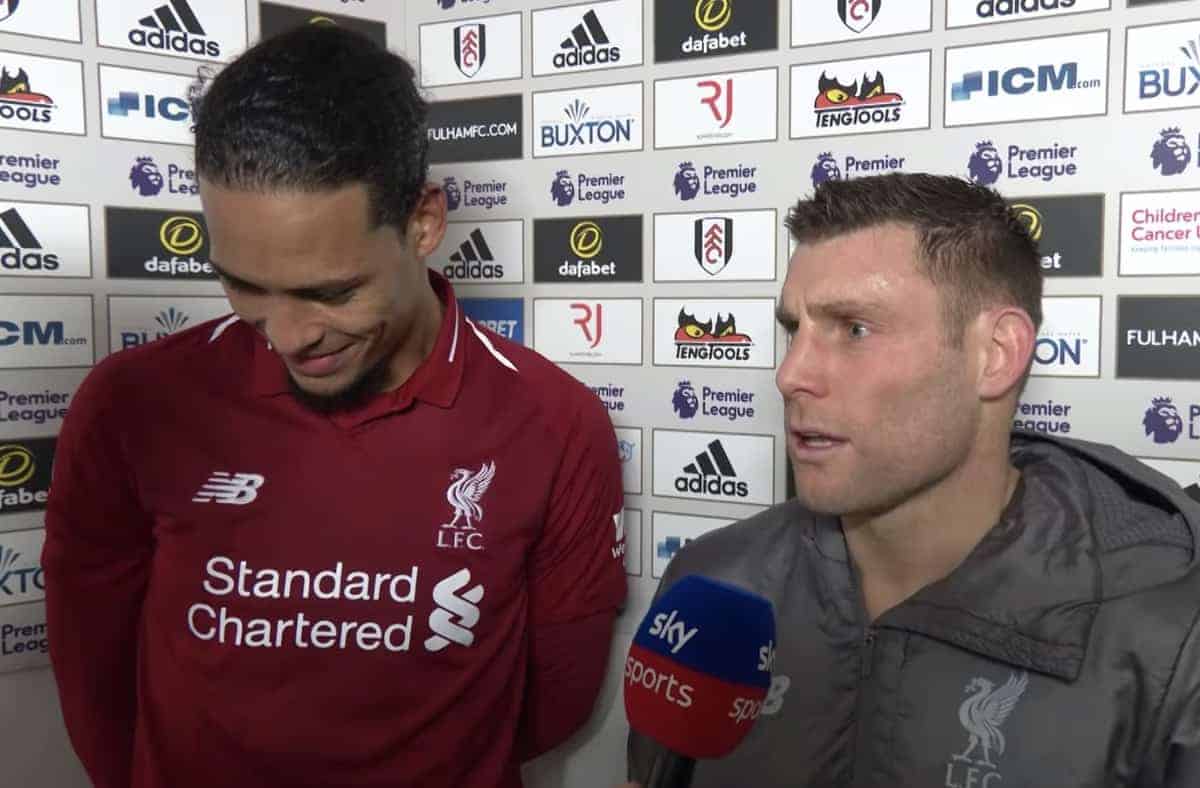 Virgil van Dijk and James Milner both owned up to their mistakes but focused on the positives as Liverpool fought back to win 2-1 at Fulham on Sunday.

Both Van Dijk and Milner played a big hand in the Cottagers’ equaliser through Ryan Babel, which put major pressure on Jurgen Klopp‘s side to push for a winner.

It came minutes later, and fittingly through the vice-captain from the penalty spot, with three points the most important takeaway as Liverpool returned to the top of the Premier League.

Despite this, Milner’s skewed clearance and Van Dijk’s mixup with Alisson were the priority for Sky Sports in their post-match interview.

Asked if he left the pitch feeling relieved, however, Van Dijk instead stressed that he was “happy,” although he admitted he should have dealt with the situation better.

“We won the game, mistakes happen in football and obviously a couple of things happened, it is what it is, but we go again,” he explained.

“I’m not giving excuses, I should have headed better.

“They scored, but we scored again so we won, we have three points, we go home all happy and we’re top of the league.”

Joining the No. 4, Milner made light of his decisive 18-minute cameo, and joked that Van Dijk’s comments were the “biggest deflection he’s seen.”

“The gaffer said ‘come on and calm it down’, so the best thing to do is slice it over the top and put Virg under pressure, which wasn’t ideal.

“But luckily enough we got the result and did what we needed to do.”

Milner continued to explain that, when stepping up to score the winning spot-kick, he was desperate to make amends for his role in Babel’s tap-in.

“I feel that’s probably my fault, so it was important to put it away and make up for that,” he said.

“But there’s years of practise gone into my penalties and in the game you’ve just got to go back to what you’ve been practising, be calm and know what you’re going to do.”

Finally, Van Dijk reflected on a victory that saw Liverpool go back to the top of the Premier League, and puts pressure back on Man City to win their game in hand.

“[It’s] massive. Obviously we knew it was going to be a very tough game, and especially in the second half,” he concluded.

“I think also we made it very difficult for ourselves. We weren’t calm enough on the ball, we create too many options for each other.

“And obviously with my mistake I made it even more excited for them.

“But in the end we got the three points, and now we can focus on the national team.”

The Reds are next in action at home to Tottenham on March 31, with Van Dijk among 18 first-team players to depart for international duty over the next two weeks.