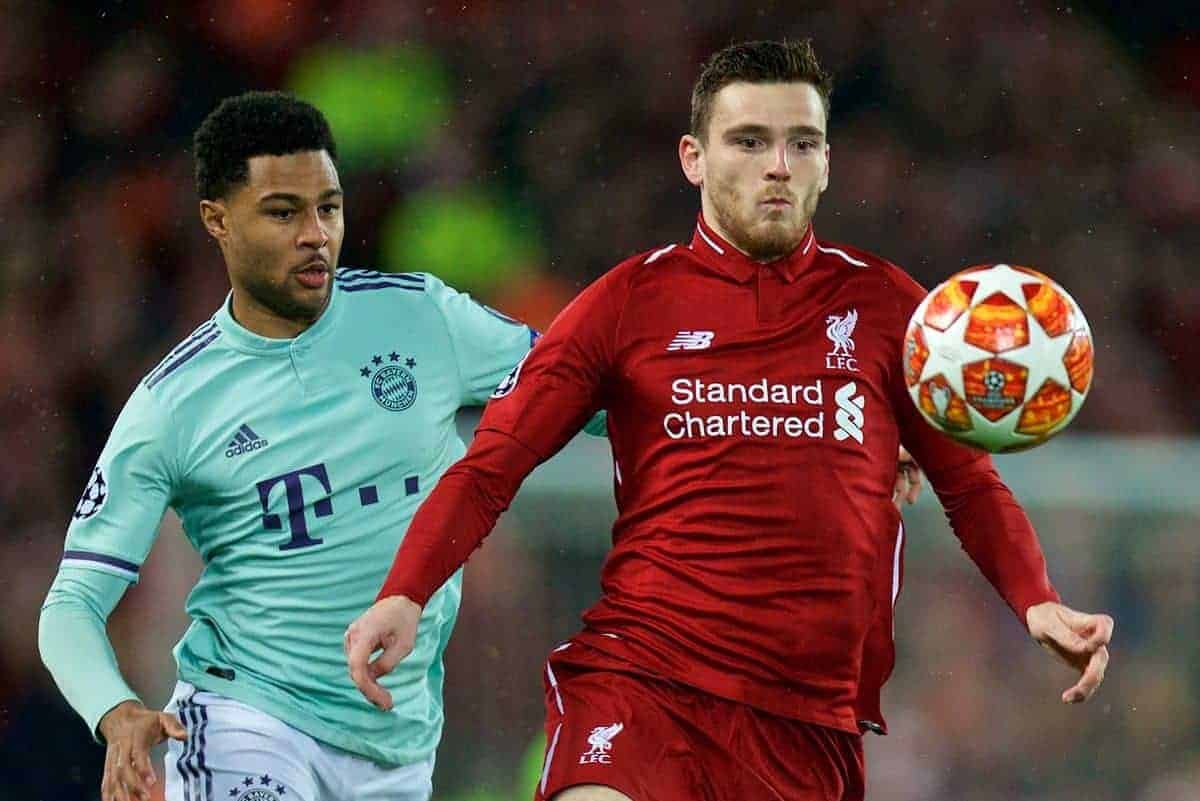 Andy Robertson has stressed the demands of keeping the likes of Lionel Messi are “not going to stop” him and Trent Alexander-Arnold attacking Barcelona.

The Reds head to the Nou Camp on Wednesday night looking to gain a big advantage in their Champions League semi-final, on their way to a second final in as many years.

This is arguably their biggest challenge yet in the tournament, however, and with Luis Suarez up front, Robertson and Alexander-Arnold are likely to be tasked with stopping Messi and Philippe Coutinho respectively.

But speaking ahead of the trip to Catalonia, the Scot insisted that while they would “need to see how the game unfolds,” neither are set to restrict their forward bursts.

“It’s yet to be seen, you kind of need to see how the game unfolds,” he explained, according to the Liverpool Echo.

“Sometimes the full-backs get all the space, sometimes they don’t, so I think we need to learn from the game.

“We know we’ll have our hands full defensively, but we all defend as a team and we attack as a team.

“If me and Trent have time to go forward, we will do it. It’s not going to stop us.

“We know that we can create goals and chances, so why change that?

“But look, we will learn from the game and move from that and see how it pans out. It’s a challenge we all look forward to.”

Robertson also discussed the prospect of defence over attack in an interview with UEFA.com, acknowledging that the game will be “unbelievably hard.”

But after adding that Liverpool would “need to be on our game defensively,” the 25-year-old insisted “we believe that we can cause them problems as well.”

After laying on two goals in the 5-0 win over Huddersfield on Friday night, Robertson’s tally of assists for the season stands at 13, while Alexander-Arnold has supplied 11.

And Robertson went into further as to Klopp’s instructions for his full-back pair, which could certainly prove useful in finding openings against a Barcelona side who looked decidedly open in their title-clinching 1-0 win over Levante on Saturday.

“We can deliver in the final third, but he always drills into us that we need to be defenders first and foremost,” he explained.

“But we do have the licence to go forward, and as long as the protection is right all over the pitch, then one of us can go forward, or even both at times if two midfielders are sitting.

“You need to get the balance right, and sometimes it’s time to sit back and defend the lead, especially when it gets to a point in the season where we’re fighting for everything.

“I think we’ve become a lot more mature, even over this season.”

Liverpool certainly won’t be going into the first leg concerned about the reputation of their opponent—as they have proved, and clearly believe, they are a match for any side.