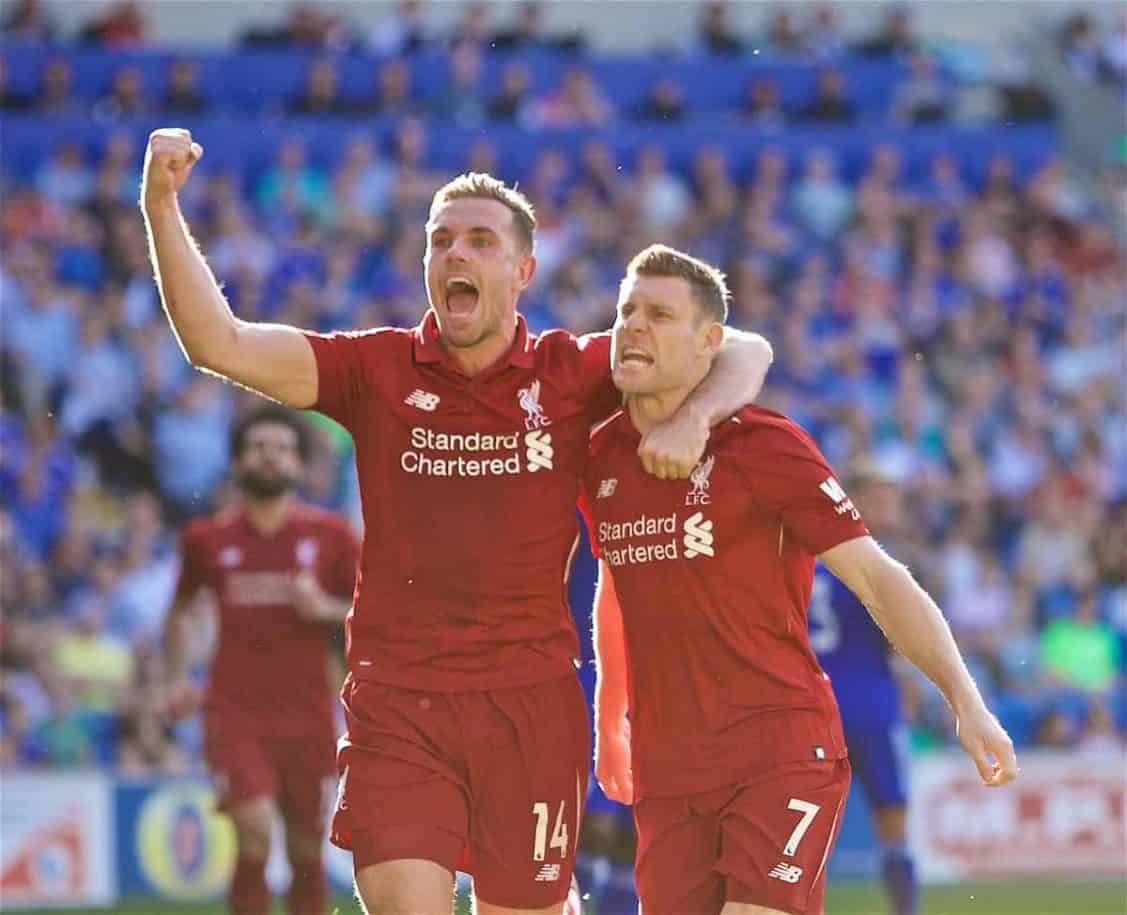 A resolute performance saw Liverpool return to the Premier League summit after a 2-0 win over Cardiff.

Jurgen Klopp‘s side travelled to Cardiff on Sunday in search of three vital points in their pursuit of domestic glory.

The Reds were the dominant team from the off and had a plethora of chances to hit the front in the opening term, only to be frustrated by some poor finishing and a well-disciplined Cardiff side.

But as shown in recent weeks, Liverpool were up to the task as they hit the front through Gini Wijnaldum, before James Milner added the finishing touches from the penalty spot.

The result ensures the Reds move back to the top of the Premier League table with three games remaining.

Fans lauded yet another impressive performance from Matip…

Not surprised Joel Matip given MOTM. Has been superb recently. Another v good performance today

Joel Matip can have moments when he looks a mistake waiting to happen but he’s hardly put a foot wrong in the last four weeks; very, very good again today ?

Matip outstanding, and considering we got him for nothing!”
– Paul Heffernan on Facebook.

Joel Matip deserved man of the match been excellent

Joel Matip top class again today. Deserves the MOTM award. In really good form. No way you can take him out of the team at the moment.

What a performance. To make Van Dijk look like Sol Bamba today shows just how good he’s been ? #LFC

Many had rued the Reds’ missed chances at half-time, but patience and optimism remained…

Tale of missed chances for #LFC in the first half. Got to think a goal will come if the game continues like that.

“Keep composed, and our chance will come soon enough. Not the time to panic.”

Not much wrong with that half apart from the finishing. Good buildup play overall. Would bring on Fabinho though. #lfc

Liverpool need to keep patient and maintain composure. The chances are there we just need to be more clinical.

Decent performance so far but haven’t been able to find the breakthrough. Big chances for Firmino and Salah in particular.

HT: Cardiff 0 #LFC 0: Firmino, Mane and Salah all missing decent chances for the Reds who improved after a slow start. Alisson to the rescue with a fine save to thwart Niasse just before the break. Patience required.

And it paid off as Wijnaldum found the breakthrough…

What a perfectly timed away goal from Gini Wijnaldum that is.

“That was fucking blasted!! What a pure hit by Gini!!!
So happpppppy for Gini!!

Gini away goal was last thing I expected

“Great hit Gini. Get in.
Trent’s corners have been excellent today, finally one gets the treatment they deserve.”

Love how made up Gini was there

It's not judo. Put your arms all over Salah don't go crying when you give away a pen. 2-0

Look forward to people convincing themselves that was somehow a dive from Salah when he was being grappled with two arms round his neck.

– Quicksand on the forums.

Apparently grappling is now allowed in football according to @GNev2… #LFC

That's the thing. Salah stays up more than most forwards but when he does go down, even when fully justified, it somehow always looks a dive. He's very, very bad at the dark arts. Could never play for Poch.


It was a penalty for me. Can’t really see how you could think otherwise…..but you will, of course.

That was a brilliant away performance against a team scrapping for survival.

We’ve matured so much, I just hope we have something tangible to show for it

88 points is the most #lfc have ever amassed in the Premier League era.

Top of the league mothafuckaas#beatthedrosswintheleague

“Brilliant, brilliant Reds. Another superb controlled performance when it mattered most. What a fuckin’ title race this is turning into!”

Break out the Ribena!

All we can do is keep winning and that's what we're doing. I love this Liverpool side. GET IN lads!!!!