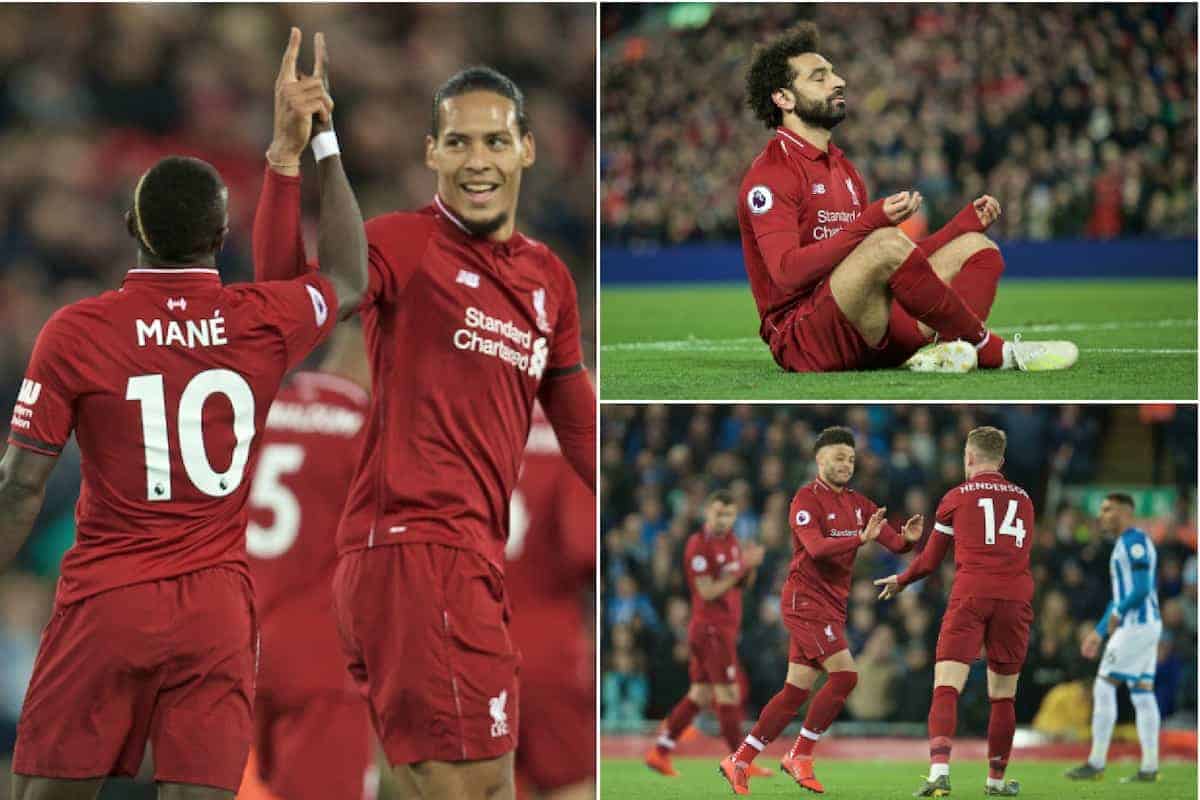 Liverpool clinically dispatched of already-relegated Huddersfield Town on a five-star night under the Anfield lights.

Prior to kickoff, Anfield paid tribute to former captain and ‘Anfield iron’ Tommy Smith, who passed away recently aged 74. When the applause and silence were over, only one thing mattered – could the Reds reclaim top spot?

Those inside Anfield didn’t have to wait long – 15 seconds in fact. Naby Keita pressed and won the ball back inside 10 seconds, Mohamed Salah then played the decisive pass back into Keita’s path. Anfield erupted before some had even taken their seats.

It was the start Liverpool needed and they never looked back. Sadio Mane added a second after a wonderful cross from Andy Roberston – another assist for the Scot, his 10th of the season – he would go on to make it 11.

Then, buoyed by their personal challenge with one another, Trent Alexander-Arnold picked out Mohamed Salah on the stroke of half-time. The Egyptian, back from his New York jaunt, chipped the ball over the onrushing keeper. It was essentially game over at the break.

The second-half brought no respite for the visitors, Mane and Salah bagged their braces. First to strike their second was the Senegal international – another header and his 20th Premier League goal of the season. Then Salah did what he does best, tapping home after a wonderful run.

Liverpool were running wild but Salah was as calm as you like – the Egyptian even had time for another spot of yoga, this time the ‘Sukhasana’ after his ‘tree pose’ against Chelsea.

The biggest cheer of the evening came not for a goal but for the return of one Alex Oxlade-Chamberlain. Almost a year to the day he left the Anfield pitch on a stretcher, the midfielder retook to the turf and nearly scored a wonderful goal inside a minute.

It wasn’t to be, but it was good to see the Englishman back in the red of Liverpool once again.

It was a stunning performance from the entire side but Klopp wanted to bring attention to one particular display:

“A complete midfielder. His dribbling is outstanding. Today he showed his best game in all defensive situations, so difficult to deal with. He’s so quick in the short spaces” the Liverpool boss said of Naby Keita at fulltime.

This result takes the Reds back to the top of the Premier League, next up is a rather tasty trip to Barcelona where Liverpool will look to gain an advantage away from home in the first leg of the Champions League semi-final.