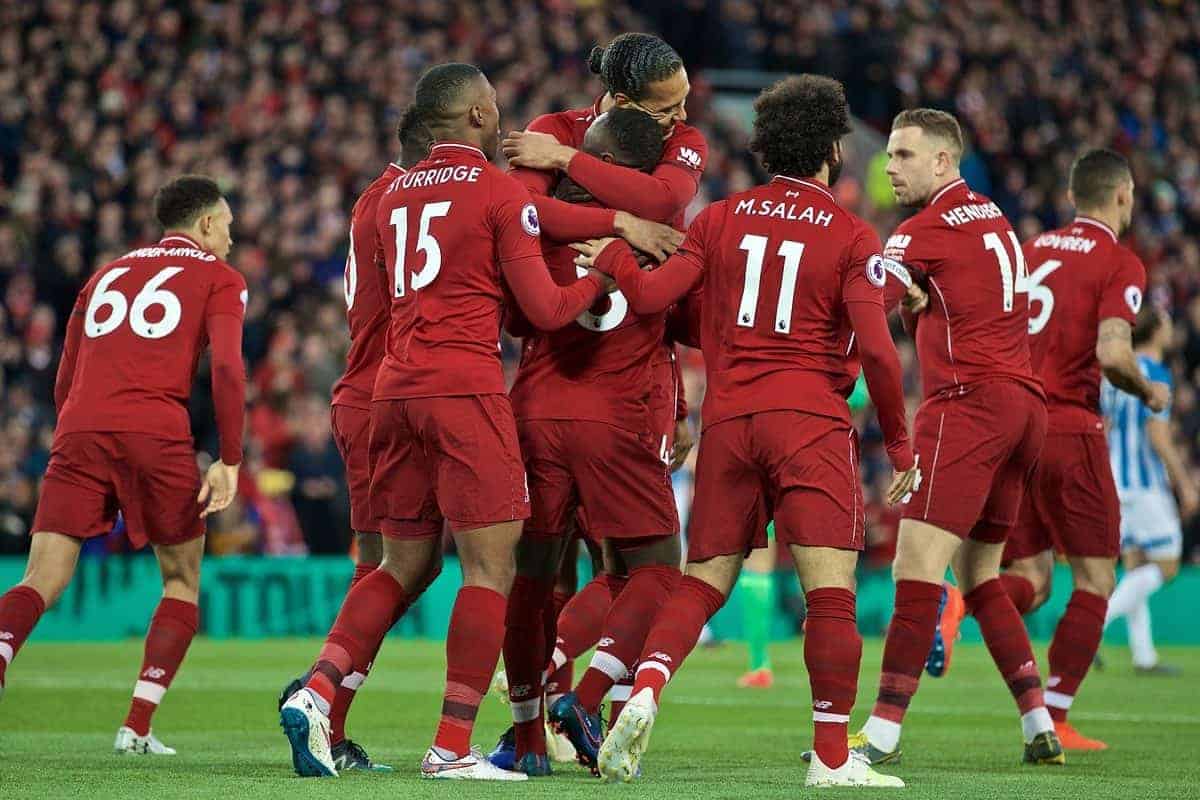 Liverpool eased past Huddersfield to the tune of 5-0 to move back to the top of the Premier League table, and fans were duly delighted.

The Reds welcomed the Terriers to Anfield in the knowledge that only a 28th win of the campaign would be enough to keep the pressure on Man City, and they secured it in emphatic fashion.

Naby Keita got Liverpool off to a flying start having pressured the visitors into a mistake before finding the back of the net- all within the first 15 seconds.

It was smooth sailing for there on out as doubles for both Mohamed Salah and Sadio Mane ensured it was a straightforward affair for the Reds as all five goals went unanswered by Huddersfield.

The result moves Jurgen Klopp‘s side back to the Premier League summit, at least temporarily, with just two games remaining.

Brilliant to see Oxlade-Chamberlain back in the matchday squad tonight. Another huge step in his recovery from injury.

Absolutely delighted to see @Alex_OxChambo back in the squad.

Big player for us. He breaks lines, has electric pace & works hard.

His attitude whilst injured should be an example to many! #LFC pic.twitter.com/NQCcs3O0fP

Biggest cheer of the night coming, Alex Oxlade-Chamberlain about to play for Liverpool for the first time in 367 days. Coming on with Shaqiri

Deserved ovation for Ox. Long road back. Delighted to see him back on the field ?????

It’s been a long road to recovery, but seeing Oxlade-Chamberlain back in the squad is such a boost.

He’s a real character and was fantastic before his injury last season.

We’ve missed him badly – great to have you back Ox!

So happy to see Oxlade-Chamberlain back on the pitch.

That was #LFC's quickest-ever Premier League goal…given as 14 seconds. Not a bad start #LFC

Naby Keita looks like he fully up to speed with what Klopp wants from him. Seems to win the ball back a lot.

3 goals in 5 starts for Keita now.

Baby Keith has been incredible today ?

Delighted to see the real Naby Keita stepping up. So much talent.

Fans lauded the full-backs for their creative prowess…

102 Liverpool goals in all competitions. 64 of them have been assisted by my count. 23 of those 64 assists from Alexander-Arnold and Robertson. 36%. good lord.

“Andy R. is not from this WORLD!! MAGNIFICENT ALIEN TO HAVE!!”

– [email protected] on the forums.

Robbo to Mané and Trent to Salah, trusty combinations. That’s a stunning 23 assists between the full-backs so far this season.

Andrew Robertson has got as many PL assists this season (10) as Jesse Lingard, Kevin de Bruyne, Juan Mata, Mesut Ozil, Sadio Mane and Fred have got between them.

He’s been a little suspect defensively but Trent hit two passes in the first half that Pirlo would be proud of.

Trent Alexander-Arnold and Andrew Robertson have more assists between them (24) than 38 teams across Europe's top 5 leagues pic.twitter.com/XxG8gLwreM

“Salah and Mané good god they are frightening.”

"Why is Salah going to New York before a match?" – Irrelevant questions you might have heard this week. #LIVHUD

Mohamed Salah's 69th goal in 100 appearances for Liverpool. No player has scored more in that many games than Salah; eclipses the record that was held jointly by Sam Raybould and Roger Hunt.

Mo #Salah returns to the top of the golden boot race. #LFC 21 goals

Just the 21 goals for the fella who didn’t get a sniff in the Team/Player of the Year conversation.

Perfect response. Keep answering the question in the most aggressive way possible. Mané everywhere, Salah still so hungry. Ecstatic to have the Ox back. Take a bow Liverpool. #LFCdigest

Keita's pressing inside the first 10 seconds makes that opener, brilliant. The assists from Robertson & Alexander-Arnold are exceptional for the remaining two first-half goals. Henderson then Roberston again for the fourth & fifth. Passes, finishes – Liverpool had it all #LIVHUD

5-0 full time. Not one ounce of leniency shown to Huddersfield by Liverpool. This is an amazing Reds team.

“Liverpool are truly incredible. Cannot do any more than we are doing. Sensational week after week. An amazing season regardless of what happens…Thank you Red Men.”

Comfortable night in the home office secures 91 points for #LFC Dominant 5 nil victory with the added bonus of getting Alex Oxlade Chamberlain and Joe Gomez back on the Anfield turf.More records for Salah and the full back assist competition hots up even more.Job done, Barca next