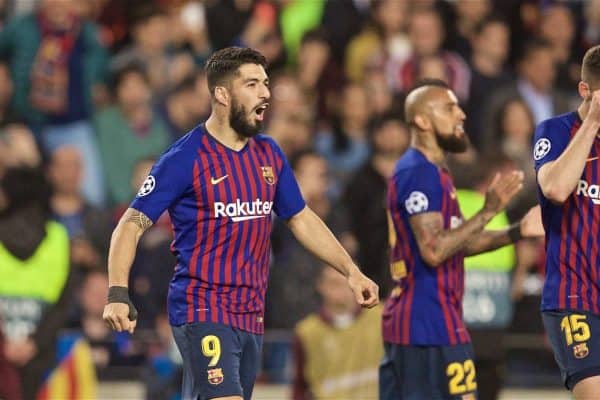 Barcelona changed their whole lineup for Saturday night’s trip to relegation-threatened Celta Vigo, but lost the game and Ousmane Dembele to injury.

While Liverpool faced a back-and-forth encounter at Newcastle which lasted a full 98 minutes and needed a late winning goal, Barca had already wrapped up the title in La Liga and sent an unfamiliar side out to face Celta.

The home side were only just outside the drop zone at kick-off, but a 2-0 win—with ex-Liverpool forward Iago Aspas scoring one—has lifted them to the relative safety of 14th, with two games to play.

Barcelona boss Ernesto Valverde took no risks with the players who started against Liverpool in the first leg last Wednesday, changing all 11 names. Only Arturo Vidal saw minutes on the pitch on Saturday night from those who started at the Camp Nou.

However, it wasn’t all positive on the playing side for los Cules, as pacy winger Dembele lasted just five minutes before suffering a hamstring injury, almost certainly ruling him out of the second leg at Anfield.

[LATEST NEWS?] Tests have confirmed that Ousmane Dembélé has an injury to the right femoral biceps hamstring muscle. The evolution of the injury will condition his availability pic.twitter.com/rLi67i0vuF

While the French international didn’t start against the Reds, he would certainly have been a consideration to play the second leg.

Dembele and Philippe Coutinho have battled for a starting spot and the ex-Liverpool man struggled last week.

With Barcelona three goals up from the first leg, the natural selection for Valverde would have been to go with Dembele, who offers far more pace on the counter-attack and an outlet for his team in wide areas.

It leaves Barca with two probable alternatives: go with the same lineup which started the first leg, or else start Nelson Semedo behind Sergi Roberto down the right, with Coutinho coming out.

One less-likely possibility is starting Malcolm, who offers similar traits with pace and being an outlet to Dembele, but who has not been seen as a regular this season.

He played the full 90 minutes against Celta on Saturday, but is more probable as an option off the bench on Tuesday night.

The likes of Lionel Messi, Luis Suarez and Co. were back in training on Sunday for Barca, ahead of their midweek trip to Merseyside.