Jurgen Klopp has made four alterations to his starting lineup as Liverpool play their penultimate game of the Premier League campaign at Newcastle.

Tonight brings the last away trip of the Reds’ domestic season, and another opportunity to keep the pressure on Man City ahead of the final day against Wolves.

A trip to St James’ Park is rarely straightforward, and the presence of Rafa Benitez in the dugout only complicates things for a side desperate for three points over their old manager.

Rafa has stressed in the buildup that the Magpies won’t go easy on Liverpool despite already being safe from relegation, but Klopp is aware it’s win or bust.

As such, despite the endeavours of Wednesday night at the Nou Camp, the manager has retained much of his side from that 3-0 loss in the Champions League.

Alisson remains in goal, looking to surpass Pepe Reina’s record with a 21st clean sheet of his debut season, with Trent Alexander-Arnold, Dejan Lovren, Virgil van Dijk and Andy Robertson ahead of him in defence.

In midfield, Fabinho is poised to start at the base of the three-man unit, flanked by Jordan Henderson and Gini Wijnaldum, with the Dutchman relinquished of his ill-fitting No. 9 role.

And with Roberto Firmino not fit to make the squad despite playing the final 11 minutes in Catalonia, Daniel Sturridge joins Mohamed Salah and Sadio Mane in attack.

Among the substitutes’ at Klopp’s disposal are Alex Oxlade-Chamberlain, Xherdan Shaqiri and Divock Origi. 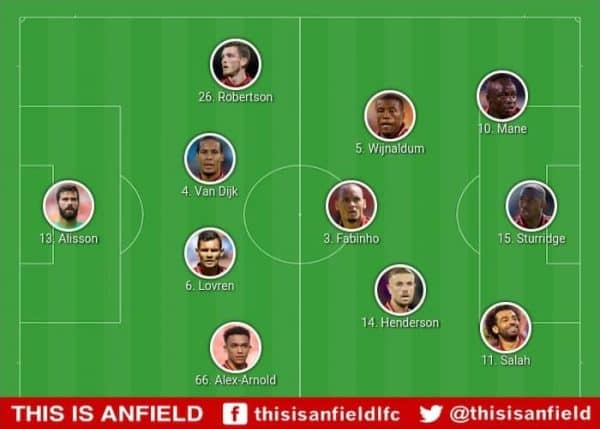