Liverpool ensured the title race will go down to the final day as Divock Origi‘s late header sealed a vital victory against Newcastle at St James’ Park.

Had to be alert as Newcastle poured men forward at times and put Liverpool’s defence under a vast amount of pressure throughout.

Not a lot he could do about either Newcastle goal, although he could have released the ball quicker in the build-up to Rondon’s goal, after Lovren had put him under pressure with a dodgy back pass.

Brave punch to clear a corner deep into stoppage time and help see Liverpool over the line.

He will have been frustrated not to have started at the Nou Camp in midweek and demonstrated once more how much he brings to Liverpool’s attacking play, creating both goals in the first half.

A quality corner delivery for Van Dijk to open the scoring, followed by a trademark, whipped ball into the box for Salah to make it 2-1. That takes him up to 13 assists this season, joint with Robertson- and 11 in the league, the joint-highest ever from a defender.

That said, he was a touch fortunate to stay on the pitch as he handled the ball on the line before Christian Atsu slammed in the rebound to make it 1-1.

Party of a shaky defensive unit on the night, but his offensive contributions were crucial to getting the three points.

Back alongside Van Dijk for the second league game in a row, the contrast between him and Joel Matip was clear as it was Lovren’s needlessly heavy backpass which put Alisson under pressure in the passage of play which led to Newcastle‘s equaliser in the first half.

Skinned for pace out wide by Atsu in the move which led to the corner from which Newcastle equalised again in the second half. Bullied by the physical presence of Salomon Rondon throughout, and looked jittery and unconvincing in possession. 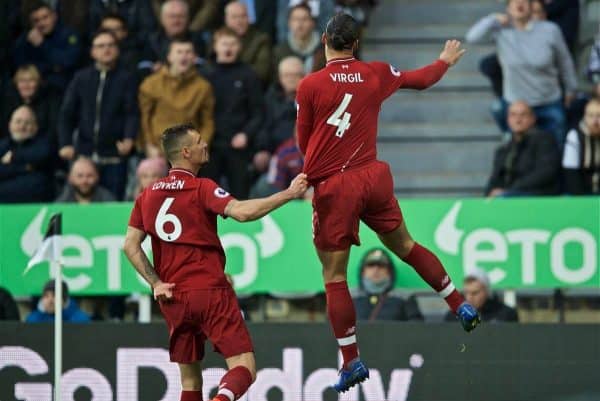 He could hardly believe his luck to find himself completely unmarked to power in a simple header from Trent’s corner for the opening goal- his 6th of the season in all competitions.

The back line as a whole was nowhere near as organised as usual, although it would be harsh to pin that on Van Dijk, who had more work to do with Lovren often getting pulled out of position and losing aerial battles.

A constant attacking threat, marauding forward repeatedly and delivering a couple of excellent balls into the box which his teammates could not quite convert.

Had to be switched on defensively to make a crucial back post header in the second half after Lovren had been easily beaten by Atsu, although unfortunately, it led to the corner from which Newcastle then equalised.

Never stopped driving the team up the pitch in the second half when Liverpool desperately searched for the winner. His engine is quite extraordinary.

A difficult game for the Brazilian, he had a great deal of work to get through with Newcastle throwing runners forward from midfield at will, leaving Fabinho to screen the back four on his own at times.

On the whole, he coped impressively and made several crucial, well-timed blocks, tackles and interceptions to break up attacks, although his use of the ball was a little sloppy and erratic at times.

Defensively, though, he was one of Liverpool’s better players in an unusually ragged team display, and he won the free-kick which led to the winner. 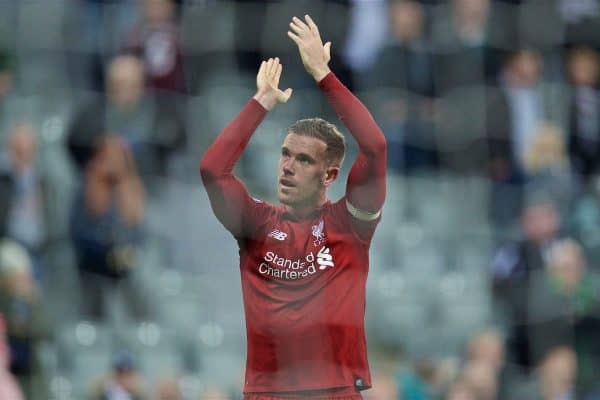 Part of a midfield unit which never fully felt in control of the game, Henderson wasn’t at his commanding best here and lacked the influence in the final third he has shown in recent games in his advanced right-sided midfield role.

It’s understandable after the intensity of the game against Barcelona, in which he performed well after coming off the bench in the first half, but Liverpool were wide open in midfield at times and neither Henderson or Wijnaldum offered enough defensive stability as they usually do.

It’s been a challenging few days for Wijnaldum who struggled up front against Barcelona, and looked leggy in midfield here against his former club.

He was livelier and sharper in the first half, shifting the ball quickly and working well off the ball to win possession, but visibly tired before being replaced by Xherdan Shaqiri for the final half hour as Klopp went all out for the win. 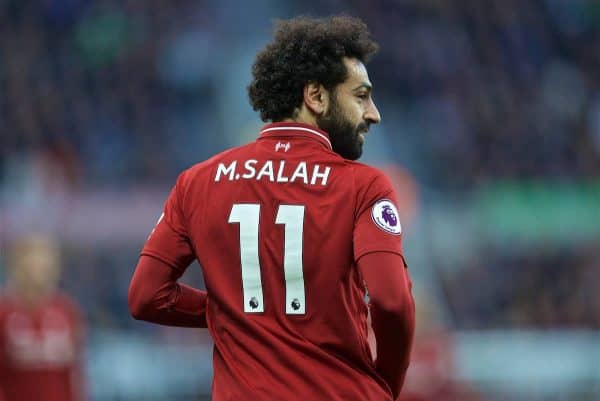 Produced a terrific, cushioned volley finish on his weaker foot to put Liverpool back in front in the first half, taking his tally up to 26 goals for the season (22 in the league), putting himself two goals clear in the Golden Boot stakes.

Horrible sight to see him stretchered off with a serious head injury following a nasty clash with Martin Dubravka – the second season in a row where he has had terrible luck with injury in a pivotal game.

For a while, it looked as though his withdrawal would be the killer blow for Liverpool’s title challenge, and touch wood he is able to recover in time to feature again this season.

Tasked with filling in for the injured Roberto Firmino once more, Sturridge was more effective than in the 5-0 victory against Huddersfield, playing some lovely through balls into Salah and Mane by dropping deep and finding pockets of space in the first half.

His influence waned as the game went on, however, and he was guilty of skying a glorious chance to make it 3-1 with a rushed shot, well over the bar early in the second half.

The final game against Wolves will almost certainly be his last for Liverpool.

Unfortunate not to win a penalty in the first half as Javi Manquillo caught him in the head with a high boot, just as he was unlucky not to win one at the Nou Camp after being bundled over by Gerard Pique in the box.

Perhaps could have done better with his shot after being slid in by Salah in the first half, as he fired straight at Dubravka from close range.

Moved into a central position in the second half after Salah’s injury, but was uncharacteristically quiet in general, again possibly as a result of fatigue.

Thrown on to help Liverpool find a winner, and did exactly that, whipping an excellent free-kick into the box for the winning goal. Another decisive impact off the bench.

Liverpool desperately needed a moment of inspiration as they chased a winner, and it was the Belgian who popped up with yet another late special with a header from Shaqiri’s free-kick to seal the three points. He will certainly be claiming it, despite suggestions that Jamaal Lascelles got the final touch. It was probably on target anyway.

Klopp’s final throw of the dice as he put on his most experienced figure, who made a couple of canny tactical fouls in stoppage time to help run the clock down.

It’s difficult to judge the manager in such a frantic and chaotic game as this, where the pattern of play was so end-to-end with both teams threatening on the attack, but open at the back.

To his credit, Klopp was proactive in making an early change with Shaqiri replacing the ineffective Wijnaldum, but hings got even more difficult when Salah had to come off with a head injury.

As it turned out, it was Origi- Salah’s replacement- who made the difference from Shaqiri’s free-kick, so in that sense the substitutes worked a treat.

The performance, on the whole, will not have pleased him, as Liverpool were ragged and careless in much of their play- both offensively and defensively.

However, the resilience they showed to keep going and get the victory in the end in such high-pressure circumstances will have delighted him.

The title will now be decided on the final day, and you couldn’t ask for much more from the players or the manager. They’ve given it everything.