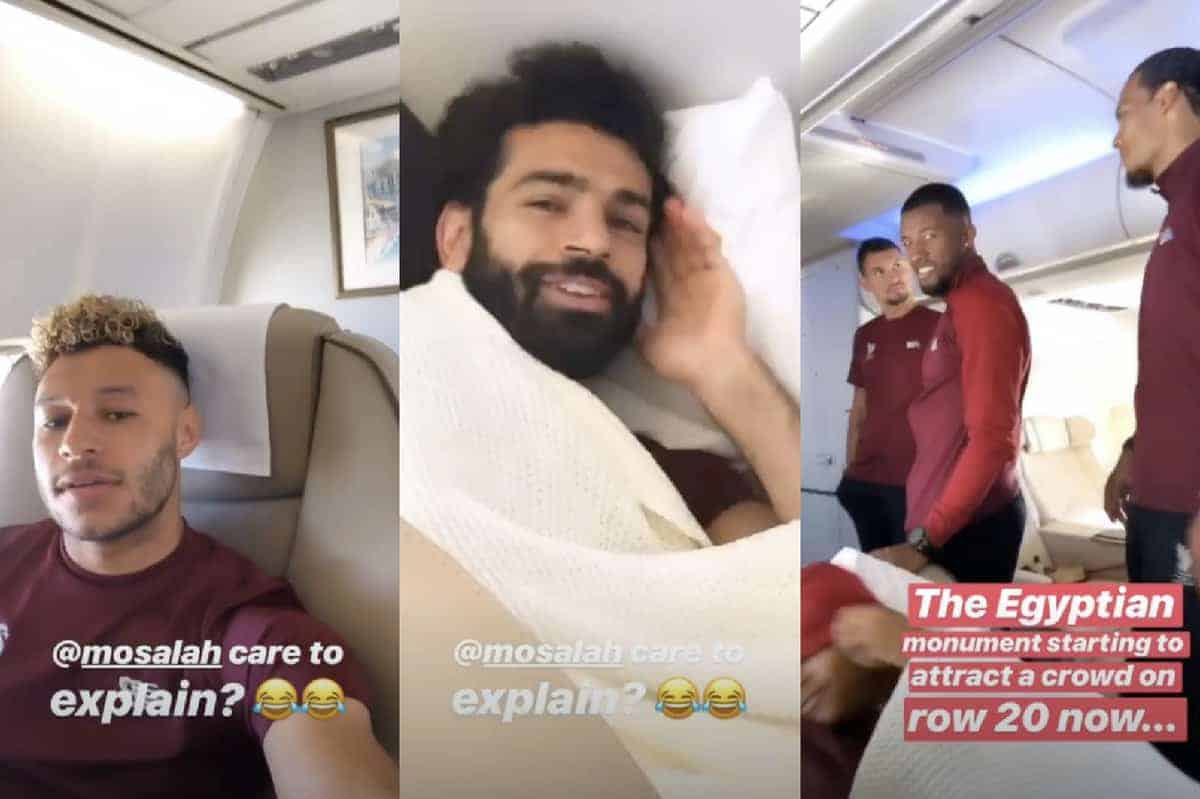 A 26-man Liverpool squad arrived in Marbella on Monday afternoon, as they continue their preparations for the Champions League final against Tottenham.

The Reds take on Spurs in Madrid on June 1, almost three weeks after the final game of their Premier League campaign, which gives plenty of time to renew their focus.

Klopp allowed his players a much-needed week off following the 2-0 win over Wolves at Anfield, before reconvening for the first of their media obligations at Melwood.

Liverpool then confirmed the 26 to depart for Spain for the rest of the week, with Naby Keita among those included despite still recovering from an adductor injury which likely rules him out for the final.

Alex Oxlade-Chamberlain also made the flight after returning from a minor setback to come off the bench in the domestic closer, and documented the trip on Instagram.

Behind his seat, the midfielder caught Mohamed Salah sleeping on the floor of the plane, much to the amusement of Rhian Brewster, Gini Wijnaldum and Virgil van Dijk—but not so much Dejan Lovren:

You alright there, Mo Salah? ?

Salah had clearly recovered by the time the flight arrived on the Costa del Sol, as the club released a video package of Klopp and his players heading into the hotel.

The entirety of the first-team squad are in Marbella, along with a host of youngsters including Caoimhin Kelleher, Ben Woodburn and Curtis Jones.

Van Dijk took inspiration from Conor McGregor as he walked past the cameras alongside Joe Gomez, with this trip to Spain as much about the morale of the squad as it is warm-weather training:

Oxlade-Chamberlain wrote that he is “looking forward to a good week’s training and continuing the preparations for the big one” as he was pictured arriving with Wijnaldum:

Touchdown Marbella ???? Looking forward to a good weeks training and continuing the preparations for the big one. #YNWA

James Milner is “ready for some hard work” as he gears up for another major final in a long and decorated career, while Salah simply shared a photo of his arrival:

Ready for some hard work ??? #trainingcamp

Wijnaldum opted for a photo from Liverpool’s Champions League roll call earlier in the day, writing that he is “looking forward to a week of hard training” before doing “everything we can to cap off this season with the trophy it deserves”:

Our preparations for the #UCL final will be underway soon! Looking forward to a week of hard training in #Marbella. ?? We’ll do everything we can to cap off this season with the trophy it deserves.? #YNWA

The Reds are in a great position to bring home No. 6, after a phenomenal campaign that saw them record their best-ever points tally in the league and only finish one behind champions Man City.

This week could prove crucial as Klopp plots to overturn Spurs and win his first piece of silverware as Liverpool manager.