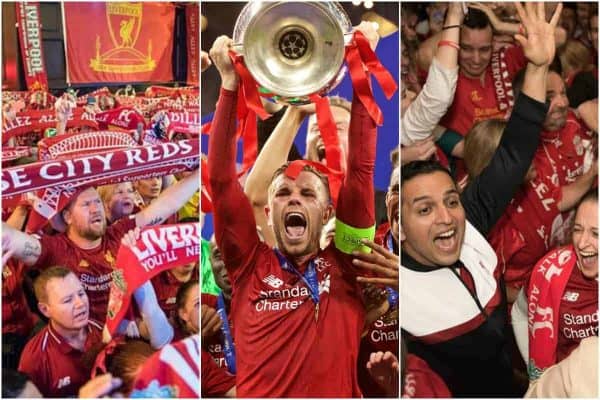 Reds from all around the world were sent into a state of euphoria following Liverpool’s Champions League final success, from the United States to Africa.

Jurgen Klopp and his team made the dreams of millions come true on Saturday as the club’s sixth European Cup made its long-awaited return to Liverpool.

Reds from all around the world were in fan parks, pubs and in stadiums and arenas all glued to the images being broadcasted from Madrid, where the end of the 90 minutes saw an outpouring of emotion and celebrations.

From New York, San Francisco and Vancouver to Indonesia, Rwanda and Iraq—the feeling was the same.

Liverpool are, again, champions of Europe and it led to some incredible scenes from around the world.

In New York, inside Carragher’s bar fans went wild as Divock Origi ensured Ol’ Big Ears was to be adorned by red ribbons:

And they were sure to let everyone know about it as they poured onto the streets and congregated around a New York Police Department’s patrol car bouncing to Gini Wijnaldum‘s song. Simply amazing:

It was a case of ‘no pyro, no party’ for those in Sacramento, California as they took to the streets to celebrate:

An outpouring of emotion came over those further down the coast in San Francisco as the game came to a close:

I say this as an Irishman, but I don’t wanna hear about Yanks not being proper fans anymore. This lot stood in line at 6 in the morning to get into @kezarpub with @LFCSF and did the club proud. pic.twitter.com/weXODL94O3

There were similar scenes in Boston as fans broke into song as the Liverpool players took part in their own celebrations in Madrid:

Over 9,000 miles away from Boston, Reds in Bandung City, Indonesia were out of this world as numerous flares were let off inside a packed stadium.

The reach of this club never ceases to amaze:

In the nearby city of Bekasi, Liverpool fans were again in their thousands as they watched Jordan Henderson lift the cup.

Truly incredible scenes which are made even more astounding when you consider the game kicked off at two in the morning:

In Malaysia, fans were watching on in their numbers:

Similar scenes were also taking place in the Maldives, with the addition of a few more flares:

And in Fukuoka, Japan it was hugs and high fives all around at the final whistle:

Early wakeup calls were also needed for those Down Under, but that did not stop Reds in Sydney from holding back as Allez, Allez, Allez rang out:

If you haven't been to @CheersSydneyNSW to watch a match with @LFCNSW Reds, then this is why you should! #ChampionsOfEurope pic.twitter.com/1DW1evgArl

The official supporters’ club in Iraq was sent into raptures as Mohamed Salah netted the penalty which sent the Reds on their way to glory:

From the brink of leaving the club to becoming a European champion, Origi was the word for those in Vancouver as supporters let their love for the striker take centre stage:

Scenes here at Vancouver.. we are the champions of Europe.. 6 times. 6 times, let that sink in.. come on @LFCVancouver #liverpool #bigears pic.twitter.com/yFX5Qd2heU

It was a party atmosphere in Kenya as the Kop Kenyans came out in force to support Liverpool:

There was nothing but joy in Rwanda as Liverpool won their sixth European crown:

Champions of Europe #SixTimes and Our Klopp is a Song here in Rwanda #YNWA #UCLFinal @LFC pic.twitter.com/ti0BQ1MdzJ

But the most moving image, however, comes from Egypt where a young lad watched on as Salah became the first Egyptian to win the European Cup: