Liverpool’s 2018/19 season was unforgettable for a multitude of reasons, and we take a look at the numbers behind the Reds’ incredible campaign.

It was a truly memorable season for the Reds after a record-breaking league campaign and a Champions League triumph which saw Jurgen Klopp pick up his first piece of silverware at the club.

On an individual and team level, it was a campaign to remember as Liverpool continued their meteoric rise and set a new benchmark for what is expected in the years ahead.

The Reds thrived both on and off the pitch and with the 2018/19 campaign slowly moving towards the rearview mirror, we take a look at the season in numbers.

The Reds played 53 games across all competitions throughout the 2018/19 campaign, three fewer than last season: 38 were won, eight drawn and seven lost.

The number of seconds before Naby Keita slotted home the opener in the convincing win over Huddersfield, the fastest Premier League goal in Liverpool’s history.

The number of players Klopp called upon in all competitions this season – three fewer than last season and the least used by Klopp in his time at Liverpool.

Clean sheets recorded in the Premier League, a tally which saw Alisson clinch the Golden Glove in his debut season.

The amount of league games Liverpool have now played without a loss at Anfield, making it two consecutive unbeaten home seasons for the first time since 1978/79 and 1979/80.

The number of wins Liverpool recorded in all competitions – 30 in the league and eight in the Champions League.

The number of goals scored by Mohamed Salah in all competitions. A return which saw him become the first Liverpool player since Luis Suarez (2012/13 and 2013/14) to score 20-plus goals in consecutive seasons.

The amount of completed dribbles past Virgil van Dijk, a record which spans across 64 appearances for the club.

The total number of goals the Reds scored across all four competitions. Eighty-nine of them were in the Premier League, 24 in Champions League and one each in League and FA Cup.

Liverpool succumbed to defeat on just seven occasions in all competitions this season – the Reds’ best record in a campaign which included European football since 2008/09 (five).

The number of days from Alex Oxlade-Chamberlain suffering a serious knee injury to the day he made his return to the first team.

Klopp’s men scored four or more goals on 12 occasions this term, nine in the Premier League and three in the Champions League.

League goals were conceded by Liverpool, the fewest of any Reds side since the inception of the Premier League.

The number of Champions League goals Divock Origi scored with the same number of shots – a truly historic and memorable European campaign for the Belgian.

Alisson and Van Dijk were the only Liverpool players to start every Premier League game this season – an incredible show of consistency and durability from the duo.

The number of different goalscorers the Reds had this season, domestically and in Europe.

The astonishing number of assists Andy Robertson and Trent Alexander-Arnold combined for in all competitions. 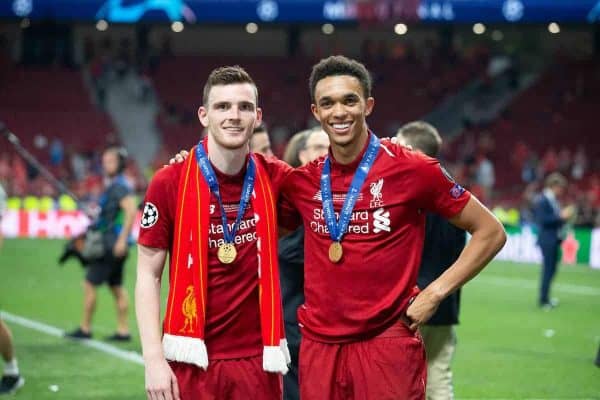 The number of points collected by Klopp’s side in the league this season – a club-record points tally.

Goals scored from substitutes in all competitions. Shaqiri, Origi and Roberto Firmino proved most effective from the bench with three goals apiece.

The longest stretch of games the Reds went without a defeat – a period which started against Brighton in January and came to an end against Barcelona in early May.

The amount of goals Liverpool scored in the last 15 minutes of games throughout the season.

At just 20 years of age, Alexander-Arnold became the first player in history aged under 21 to start consecutive European Cup finals.

The number of times Liverpool led at any point during their 53 games this season.

The estimated number of people who took to the streets in Liverpool to celebrate the new champions of Europe during their victory parade.

Incredible scenes for an incredible team, after a season no Red will forget in a hurry.