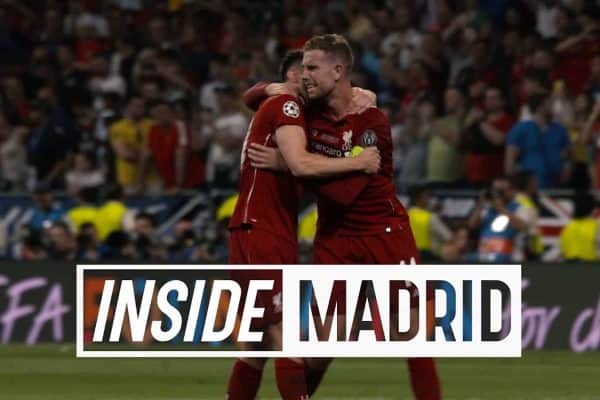 Liverpool brought the European Cup home with a 2-0 win over Tottenham in Madrid, with over 50,000 supporters flying out to the Spanish capital to help.

The Reds overcame the likes of Paris Saint-Germain, Napoli, Porto, Bayern Munich and Barcelona on their way to the Champions League final, decided by a Mohamed Salah penalty and Divock Origi‘s seventh goal of the season.

It was a relatively low-key final, hampered by the heat, the timing of Salah’s opener and a three-week wait from the end of the domestic campaign.

But it provided one of their finest moments in Liverpool’s history, as they moved ahead of Bayern and Barca with their sixth European Cup.

The travelling fans made sure it was a memorable weekend, as they massively outnumbered their Tottenham counterparts to bring a party atmosphere to Madrid.

Liverpool’s behind-the-scenes footage begins with Jamie Webster’s view of the fan zone in Plaza Felipe II during his set on Saturday afternoon, and a sea of red.

It takes us through the buildup at the Wanda Metropolitano, the explosion in the travelling Kop as Salah’s spot-kick rippled the net, and the moment when the cup was guaranteed as Origi beat Hugo Lloris to make it 2-0.

The LFCTV cameras follow the players as they soak it in at full-time, with a tearful Jordan Henderson locked in an embrace with Adam Lallana, before the trophy lift.

We get a great view of the squad’s post-match You’ll Never Walk Alone, and the scene as Trent Alexander-Arnold met his family with the European Cup in his hands.

Roberto Firmino sang along to his own chant as the fans stayed long after the final whistle, before the cameras move into the dressing room for the players’ celebration.

Madrid was an incredible night for Liverpool, and this video gives a real feeling of the emotion behind it.