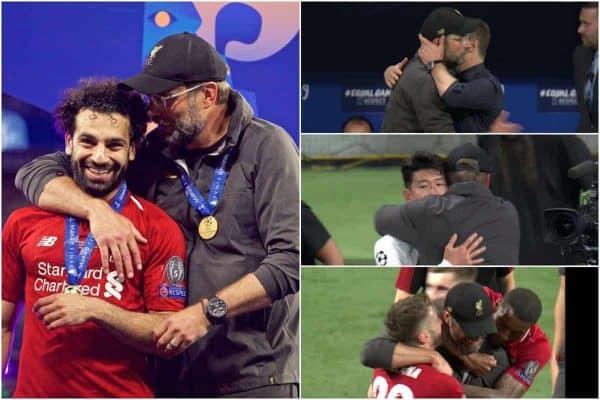 Just when you thought you’d seen all the post-Madrid content you could ever consume, LFCTV drop a six-minute video of Jurgen Klopp immediately after full time and it provides a fascinating insight into the manager.

We learn a lot from this video (below); Klopp is relatively calm on the full-time whistle, controlling his emotions to immediately first embrace with opposing manager Mauricio Pochettino.

From there there’s a quick embrace with the fifth official, before plenty of hugs with his backroom staff, from nutritionist Mona Nemmer to fitness coach Conall Murtagh.

What’s clear here is the respect that Klopp’s coaches have for him. They are pleased for him, their leader, to win a trophy he so richly deserved after six consecutive defeats in finals previously.

In coaching, much of a coach’s success comes down to earning respect from those around them; from backfroom staff, players, hierarchy, and more.

Klopp began this process on day one at Melwood when he spoke to everybody at the Reds’ training ground, making everybody from the canteen staff to the security on the gates feel part of what he wanted to achieve.

This continued even the week before Madrid, with the boss saying ahead of the final: “We do it for Carol and Caroline, we do it because we know how important it is to them.” Carol and Caroline are the now well-known duo who work in the Reds’ Melwood canteen.

“Each player knows the name of each person who works at Melwood,” said Klopp.

“It’s not down to me to create an atmosphere, each person is responsible for that, in a football team especially. It worked out well, we all win for each other.”

Klopp though has clearly earned the respect of those outside of Liverpool too, with embraces with several Tottenham players showing this – not because Klopp initiates the hug, but the manner in which it is received. There is mutual respect.

We see the humility that Klopp has in defeat; he has been there, he knows how it feels.

The celebrations then begin, with Gini Wijnaldum‘s jump on the boss’ back showing the jovial side.

Klopp has earned the respect, trust and admiration of his players, his staff and from those around him. They see how hard he works day-in-day-out, how much he deserved this success and how he gives them the respect they want.

Klopp’s players have bought into what he wants and how to achieve it.

“TEAM: Together Everyone Achieves More” – that’s what we always stress to them,” explained assistant coach Peter Krawietz previously.

“We’ve tried to create an atmosphere among the squad which is always really competitive. As a team we know that the only way we can reach anywhere is by working together.”

Having delivered the European Cup in his third full season in charge at Anfield, Klopp has certainly created the right atmosphere for further success.