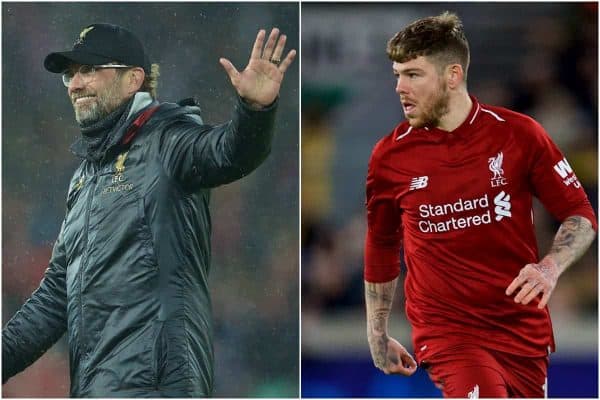 Two new left-backs have been linked with Liverpool in their pursuit of a replacement for Alberto Moreno, but these rumours should be ignored for now.

The Reds are expected to sign a new backup for Andy Robertson this summer, as despite widespread claims of a quiet transfer window, left-back is one of three positions needing cover.

Along with a new No. 2 goalkeeper and a versatile forward to take over from Daniel Sturridge, an alternative to the departed Moreno is essential.

With Adam Lewis tipped to leave the club on loan to the Football League, there appears to be little chance of a promotion from the academy as many fans had hoped.

But after Lloyd Kelly swapped Bristol City for Bournemouth, no concrete interest has been reported so far—and, instead, tabloids have floated a host of candidates.

Spanish publication Sport claimed on Thursday evening that Real Betis’ Junior Firpo is “one of the options they are considering.”

It is added that “Barcelona have also asked about the speedy full-back’s situation,” inferring that the Reds have made an enquiry, though Betis are in a position to demand €50 million (£44.6 million).

Firpo, who is part of the Spain squad at this summer’s U21 Euros, scored three goals and laid on five assists in 29 games last season, and at 22 is an exciting prospect.

But rumours in Sport seem to have little basis in truth, and instead have stemmed from a mere suggestion from Bleacher Report‘s Dean Jones as to the calibre of left-back Liverpool could target.

In his assessment of the Reds’ transfer window, Jones named Firpo and Augsburg’s Philipp Max as players whose “versatility and style” would suit Jurgen Klopp‘s approach.

There is no indication that Liverpool would make a bid, and it seems this is a case of a story becoming lost in translation—and perhaps deliberately.

It is not just overseas sources that picked up Jones’ speculation, with the Liverpool Echo‘s live blog on Thursday citing both Firpo and Max as being “tipped as possible incomings.”

It would not be difficult to dig a little deeper and discover the origin of the rumour in Bleacher Report, but that would be overlooking the thirst for a story.

Jones is right in attesting that Liverpool could be looking for a player who can “adequately fill in at left-back but can also influence play further up the field, but at £44.6 million Firpo would be too pricey.

There will be little danger of any new arrival supplanting Robertson as first choice, and a low-profile addition is more likely.