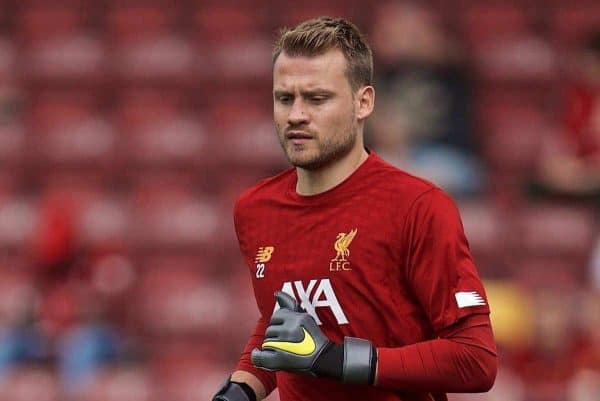 Jurgen Klopp has explained why he is not planning to let Simon Mignolet leave Liverpool this summer, with the Belgian’s ability as a backup too important.

Mignolet has been widely linked with a move away from Merseyside ahead of 2019/20, after effectively spending a season-and-a-half as No. 2.

First, he lost his place to Loris Karius, but the German’s shaky grip on the gloves gave way as Alisson arrived from AS Roma to produce one of the best seasons from a Reds ‘keeper in the Premier League era.

Alisson‘s place as first-choice goalkeeper is undisputed, which puts a 31-year-old Mignolet in a difficult position, but so far the club’s stance appears to be that they would prefer he stayed.

Klopp reflected this in an interview with assembled journalists after his backup stopper played 81 minutes in the 3-1 win at Bradford on Sunday afternoon.

“Yes. [From what] I’ve heard [he will stay]. [We’ve had] a lot of conversations in the last couple of years, months,” he explained.

“Before we left [for summer] we had a talk, I would say yes [he will stay].

“And we have that, it’s cool, with Ally and Simon.

“That’s a very good situation for the club, a situation I think you should have, and that’s why everything is fine from my point of view.”

This is unsurprising from Klopp, because as he explains, this is simply “why everything is fine from my point of view.”

The manager’s words indicate that this may not be a feeling shared by Mignolet, and rightly so, given he played just twice last season and is also second choice for his country.

Crystal Palace have been credited with an interest in the former Sunderland goalkeeper, but a big-money bid would be required to satisfy Liverpool.

It has been suggested this new stance—that Mignolet is, in fact, not actively ‘for sale’—is designed to drive up the price for any side looking to sign him this summer.

That could well be the case, but for Klopp, it makes complete sense to retain the perfect professional to serve as deputy to Alisson.