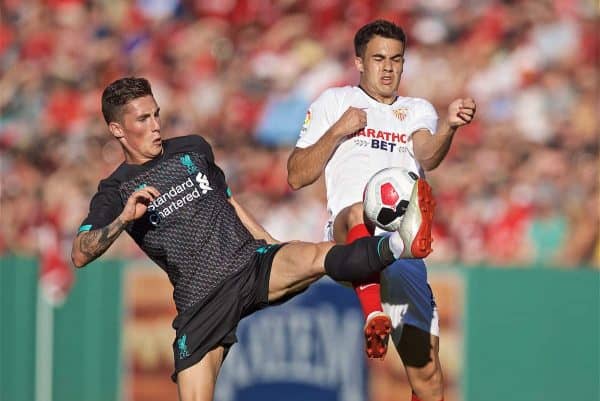 Liverpool lost 2-1 to Sevilla on Sunday night in Boston, in a pre-season friendly which was anything but, as the Spanish side took a ridiculous approach.

Taking to the field in black, the Reds lined up with their strongest side of pre-season so far, though Jurgen Klopp made the surprise decision to start Andy Lonergan between the sticks.

The 35-year-old will have been grateful to start in the shade, as the Boston heat set in, and he was drawn into a decent low save early on, met with applause from a busy Fenway Park.

Sevilla had the better of the chances in the opening half-hour, with Ever Banega crafting openings from his role in the middle of the park and Liverpool forced to attack on the break.

And the Reds were behind with less than 10 minutes to go before the break, as the ball fell to Nolito in space in the penalty area, and his right-footed finish gave Lonergan no chance.

Liverpool had restored parity on the cusp of half-time in a heated game, with Divock Origi hammering home a close-range finish after Nat Phillips headed down Trent Alexander-Arnold‘s corner.

Klopp made a full 11 changes at the break, as the likes of Ki-Jana Hoever, Yasser Larouci, Adam Lewis and Curtis Jones were brought on for another opportunity.

Larouci and Jones stood out in the early stages, with the midfielder’s ease on the ball allowing Liverpool more time and space as they looked to unpick the Sevilla defence.

Industrious play from Rhian Brewster provided Jones with a great opportunity in the box, but the 18-year-old was denied by a brilliant stop from Tomas Vaclik.

Tensions rose further as strong challenges continued, and it piqued as Joris Gnagnon slashed at Larouci’s ankles, leaving the teenager to be stretchered off as he picked up a straight red card.

A straight red card, for taking down a teenager, in a friendly.

It was a moment which encapsulated the game, with the result secondary as ever in pre-season, but more so in Boston on Sunday as a largely tepid 90 minutes of football was marred by Sevilla’s undue physicality.

The Liga hopefuls capped the evening with a late winner from Alejandro Pozo.