Liverpool were left to share the spoils with Sporting CP in New York, as their pre-season tour of the United States ended in a 2-2 draw at Yankee Stadium.

Jurgen Klopp named arguably his strongest side possible for the final friendly of the Reds’ US tour, though Simon Mignolet was among those standing in for first-choice absentees.

The Belgian found himself rolling his eyes in frustration as he fumbled his save from Bruno Fernandes’ routine long-ranger, with the ball slipping through his grasp and into the back of the net after just five minutes.

With the game played at a higher tempo than against Dortmund and Sevilla, and Liverpool pushed hard for an equaliser with Gini Wijnaldum and Alex Oxlade-Chamberlain persistent on the wings.

The leveller came, again, through Divock Origi, with the striker turning home from the rebound after Jordan Henderson‘s effort was saved.

Liverpool’s makeshift wingers combined to make it 2-1 heading into the break, with Oxlade-Chamberlain’s outside-of-the-boot cross landing at Wijnaldum’s feet, and the Dutchman forcing it over the line. 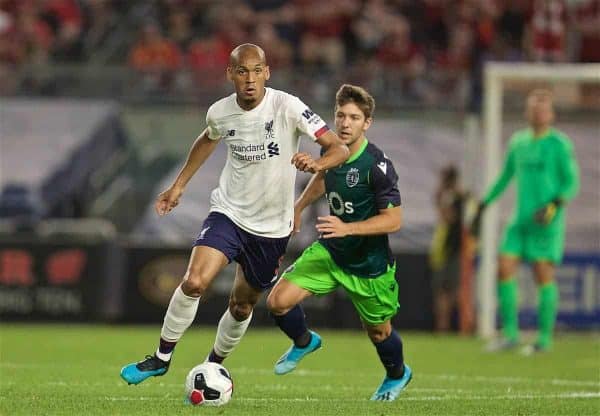 There was plenty of focus on Fernandes in the buildup, and the Portuguese playmaker certainly lived up to the billing, adding to his goal with a fine assist for Wendel’s equaliser for 2-2.

Fernandes picked up the ball on the move down the left, cut back to evade Trent Alexander-Arnold and laid it across to his fellow midfielder who, unmarked in yards of space, produced an easy finish.

Klopp then made three changes on the hour, with Joe Gomez, Harry Wilson and Ryan Kent all coming on, before the introduction of Dejan Lovren, Adam Lallana, Curtis Jones and Rhian Brewster 15 minutes later.

Gomez and Wilson combined well down the right flank, while Jones’ deployment in the middle of the park gave Liverpool a vibrancy which had been lacking with Henderson and James Milner there before him.

Sepp van den Berg was brought on in the closing stages to a huge ovation from a lively New York crowd, with his every touch cheered as the game ended as a score draw.