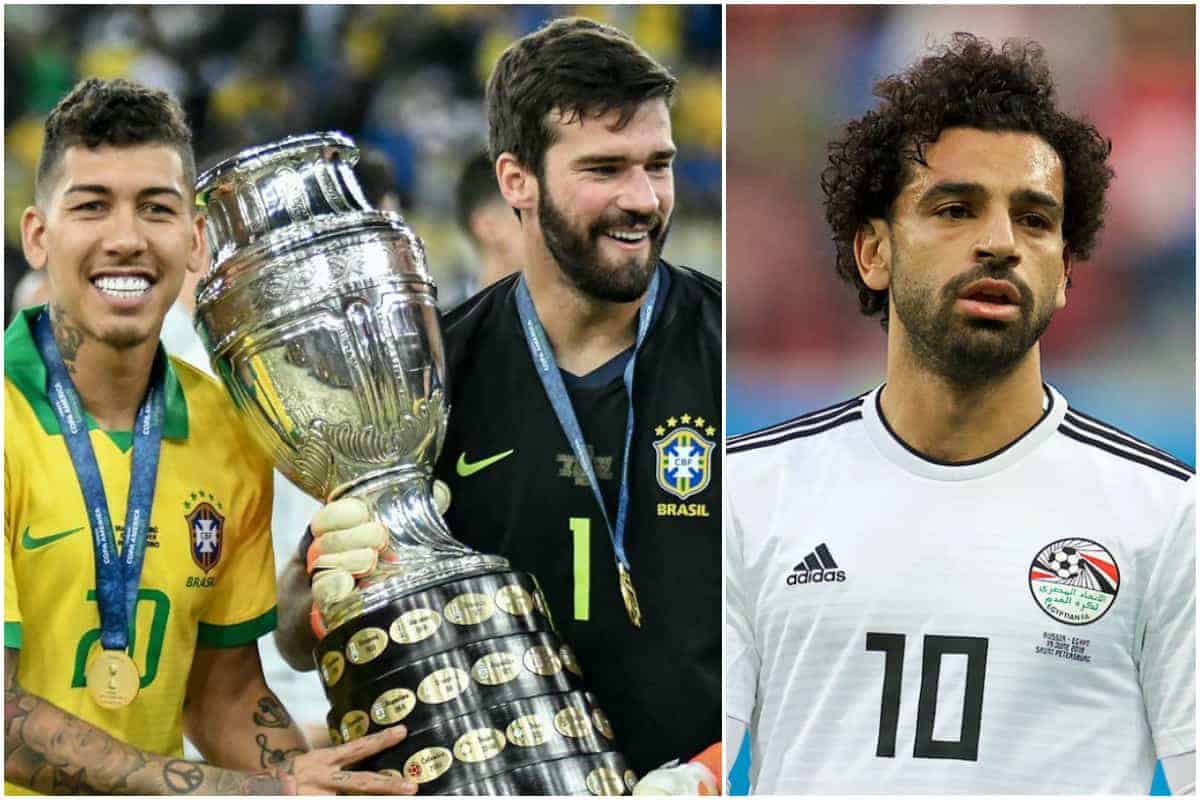 Jurgen Klopp has detailed the short-term plan to help Liverpool’s returning players integrate into the squad as quickly as possible ahead of the new campaign.

With just one fixture left in pre-season, and the Community Shield ahead, there are five players in training today for Liverpool who have not yet featured over the summer.

Naby Keita and Xherdan Shaqiri have returned from injury for their first sessions over the last day or two and, as a result, will be heading to Evian for the Reds’ training camp.

Joining them as scheduled are a trio of internationals: Alisson and Roberto Firmino, who won the Copa America with Brazil this summer, and Mo Salah, who was in action for Egypt in the Africa Cup of Nations.

The squad depth will be significantly boosted by these five faces, particularly in an attacking sense, but they will now be weeks behind their team-mates in terms of fitness and match action.

And with the 19/20 season officially starting in one week, Klopp told media at his press conference for the Community Shield how he’ll try to get them involved.

Wednesday’s friendly against Lyon was prepared with these late arrivals in mind, though of course it wasn’t intended that an additional duo—Shaqiri and Keita—would also need it after injury.

“Everyone is fine, the [returning] boys are going in time [to the training camp]. From this afternoon on, Shaq, Naby, Bobby, Mo and Alisson are in training which is great.

“We prepare for Sunday, the first game, so we try to be as prepared as possible.”

Even if those players do feature for Klopp’s “maximum” of half an hour against Lyon, it’s unlikely they’ll be ready to take on Man City at Wembley, with the possible exception of goalkeeper Alisson.

The boss was slightly surprised to hear assembled journalists speaking in less-than-glowing terms about the prestige of the Community Shield, but still insisted it was a match his team wants to win.

“Good results in pre-season help to gain confidence but that’s not the most important thing. In the season its only games, not too much time to train.

“We can’t expect to play our best game of the season on Sunday but it’s not about that. It’s to win a football game and find a way and hopefully we find one.

“We have to be a lot [better] than yesterday [against Napoli]. Man City were good last year and this year, it’s always the most difficult game to play.”

While the bulk of the team for Wembley may be made up of that which has started the last two friendlies, half an hour against Lyon and then hopefully another appearance against Man City should mean the forward duo of Firmino and Salah are approaching readiness.

They won’t have lost too much in the way of fitness with just three weeks off, so they may be ready to participate against Norwich and beyond.

It’s safe to say, though, on the evidence so far and with the lack of preparation time for the attacking line—Sadio Mane isn’t back yet—that it’s improbable that Liverpool will be firing on all cylinders from the very first game.