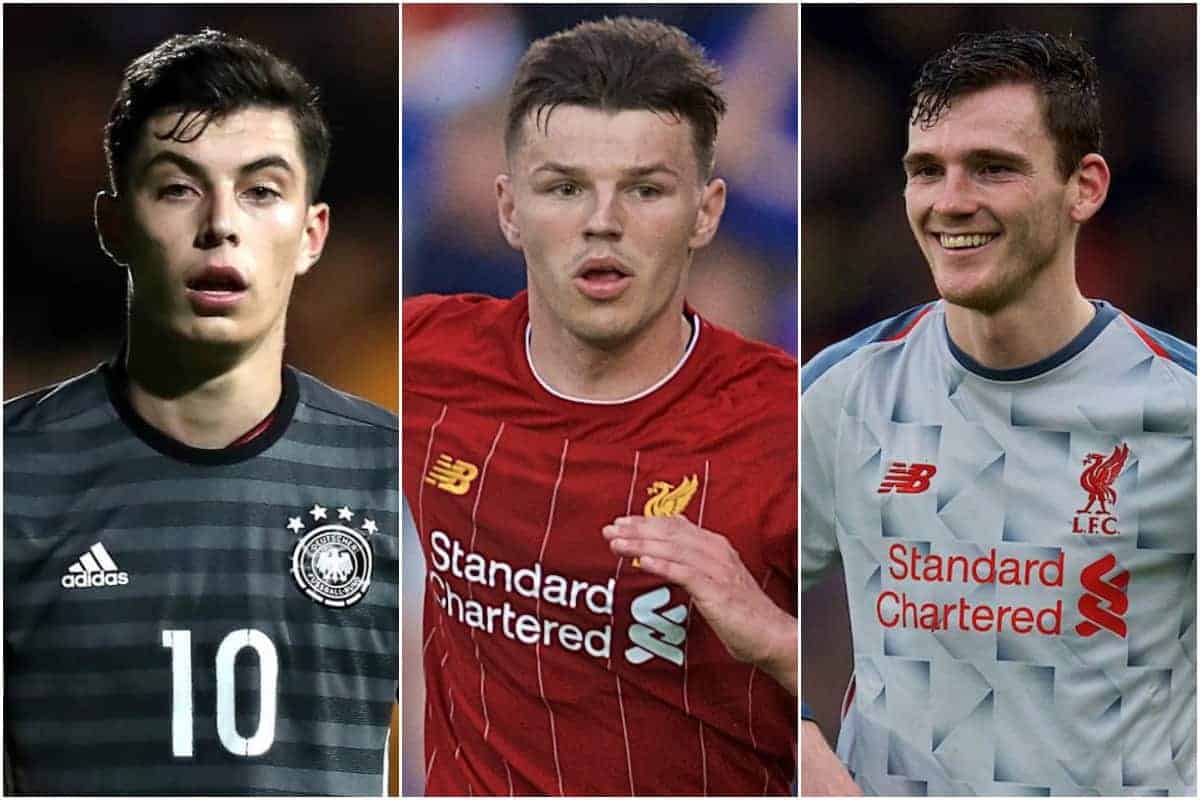 We round up the latest Liverpool news and transfer rumours on Friday, as the Reds gear up for their first pre-season friendly on US soil.

Reds One of Three in ‘Chase’ for Havertz

The Reds have been listed as one of three teams who are interested in signing Bayer Leverkusen starlet Kai Havertz.

According to German outlet Bild, Liverpool have joined Barcelona and Bayern Munich in the “chase” to sign the 20-year-old.

Havertz has thrived as an attacking midfielder and was integral to securing Champions League football for Leverkusen next term for the first time in two years, after notching 20 goals and seven assists in 42 appearances.

Liverpool could do with another attacking outlet and Havertz would prove to be a perfect option, however the report claims the Bundesliga side have no intentions of parting with their star man.

He has a contract until 2022 and is valued at €100m, and with the Reds not expected to splash the cash it is unlikely that a move to Anfield would eventuate.

With Bayern well-known for poaching Germany’s best young talent, the Allianz Arena could be Havertz’s next destination when he feels Leverkusen is no long the right place to ply his trade:

“I am honest, at some point the next step must come for me. But I’m not going to worry about when exactly that will happen. What counts now is Bayer Leverkusen.”

Fenerbahce Stopper on the Radar

According to Goal, a source close to the player has claimed the 19-year-old stopper has been subject to an enquiry from the Reds.

Ozer is regarded as a future star for Turkey, but he struggled to break into Fenerbahce’s first team last season having made just one appearance in the Turkish Cup.

Although Liverpool’s goalkeeping ranks having taken a hit through injury in recent weeks with Caoimhin Kelleher and Vitezslav Jaros being forced to watch from the sidelines, and Simon Mignolet‘s future still up in the air – a move for Ozer seems unlikely at best.

Liverpool’s Under-23s will play in the EFL trophy for the first time this season and the details for two of their three group games have now been confirmed.

The Reds will open their campaign against League One side Oldham Athletic on August 7 at 7.45pm (BST), before making the trip to League Two outfit Accrington Stanley on October 29 – with the same evening kickoff time.

The group game against Accington, however, is subject to changed based on the clubs’ participation in the fourth round of the League Cup.

A final date and time with their final Group B opponent Fleetwood Town has yet to be confirmed.

It will prove to be an invaluable opportunity for the club’s youngsters to compete at senior level, but only two of the four teams will progress to the last 32.

The midfielder made the move to Merseyside from Chelsea over the summer and after wearing the Liverbird for the first time Bailey spoke of her joy to Liverpoolfc.com.

“It was really good to get my first 90 minutes, it was a tough game but it was brilliant to put on the red shirt for the first time,” she said.

“We worked so hard to get the equaliser so it was nice to get it in the end. It was tough out there but we put in a good shift.

“It’s just about getting minutes in at the moment, it’s only our second week of pre-season but it was massive for me to get my first 90 minutes and hopefully we can all build on that.

“It’s amazing to be part of this tour and travel with the men’s team and it shows that we are together as a club.”

Vicky Jepson’s side will be back in action against New York Athletic at Boston University in the next leg of Liverpool’s US tour.

Andy Robertson has been awarded the Tennent’s Golden Can award, an accolade which is handed to the ‘most deserving Scottish icons across the globe’.

The Scotish captain has been lauded for his rise from unemployment to winning the Champions League and earning a place in the PFA Team of the Year.

“I’m grateful to Tennent’s for awarding me this accolade at the end of an incredible season.

“It’s a real honour to be joining some of Scotland’s greats across the cultural and sporting landscapes – from Irvine Welsh and Biffy Clyro to Martin Compston and Mark Millar.”

It’s quintessionally Scottish this one. Nice one, Andy!