Jurgen Klopp has named Sadio Mane in his starting lineup for the UEFA Super Cup final against Chelsea tonight in Istanbul, as Roberto Firmino drops out of the XI.

Back in Turkey to take on the Europa League title-holders, the Reds could secure their first silverware of the season this evening.

Though they sealed a comprehensive 4-1 victory over Norwich on Friday night, Klopp’s side head into this game under the cloud of Alisson‘s calf injury, which the manager has claimed will keep him out for the “next few weeks” at least.

Regardless of the extent of Alisson‘s injury, the reality is that Adrian makes his first start for Liverpool tonight at Besiktas Park.

In front of the Spaniard, signed just over a week ago, is a back four comprised of Joe Gomez, Joel Matip, Virgil van Dijk and Andy Robertson.

Fabinho takes up duties as the No. 6 in midfield, to be joined by James Milner and Jordan Henderson.

And with Mane back fit and coming off the bench last week, the Senegalese starts alongside Alex Oxlade-Chamberlain and Mohamed Salah in attack.

This is Oxlade-Chamberlain’s first competitive start since damaging his ACL in the 5-2 win over AS Roma at Anfield almost a year-and-a-half ago.

Klopp was permitted to name 12 substitutes for this European ‘final’, and therefore the likes of Harvey Elliott, Ki-Jana Hoever and Rhian Brewster are all on the bench.

They await in reserve along with more experienced figures including Firmino, Gini Wijnaldum and Divock Origi.

However, the list is down to 11, as Naby Keita misses out due to injury. 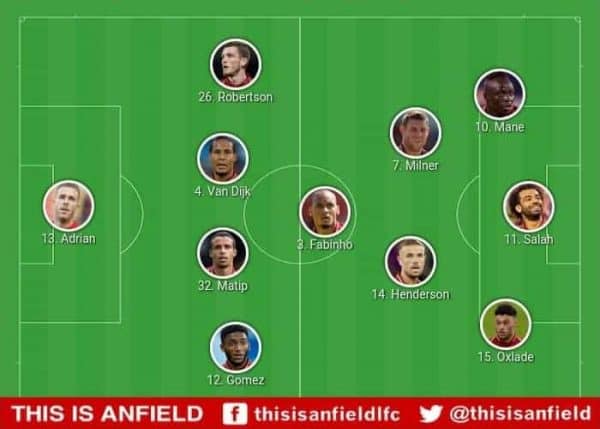