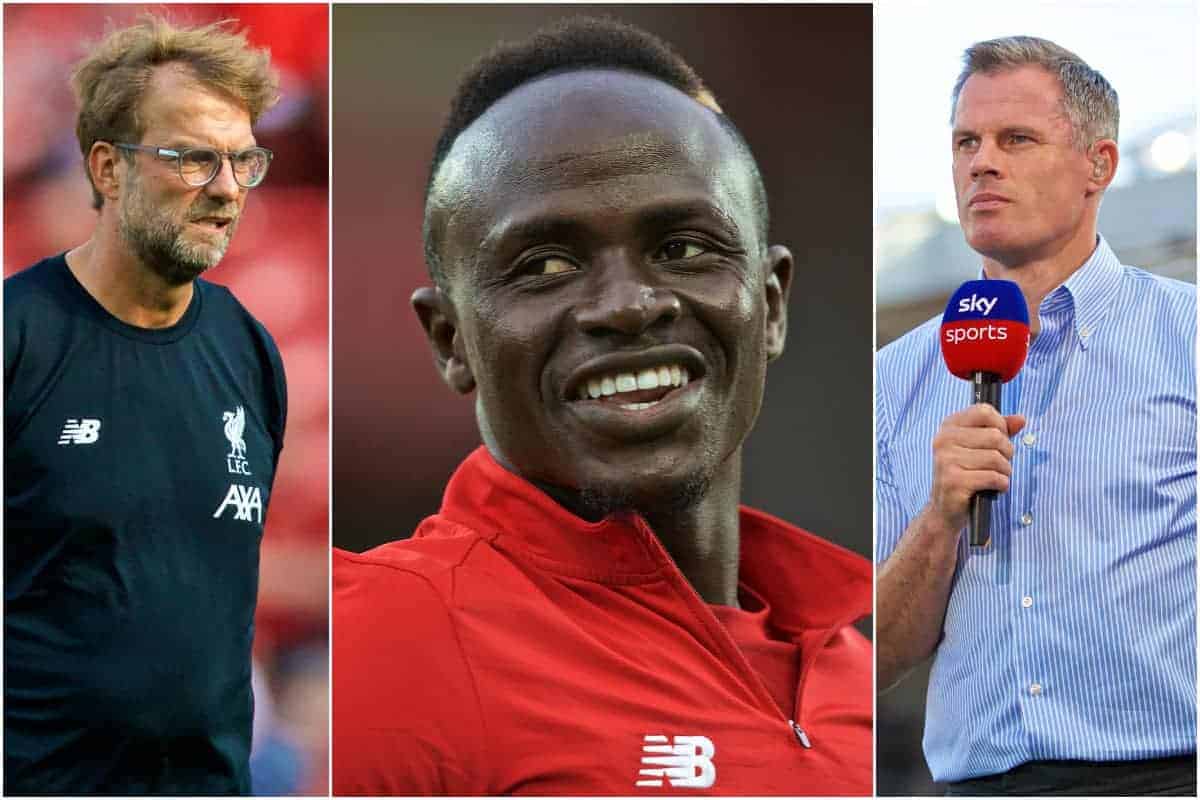 Following Jamie Carragher’s claim “there will be a drop-off without a rest” for Sadio Mane, Jurgen Klopp has insisted he has a plan for his No. 10.

Mane’s 2018/19 season only ended on June 19, and the Senegalese was unable to take the usual three-week break afforded for players over the summer.

Since returning as a second-half substitute in the 4-1 win over Norwich on the opening day of the Premier League, he has started the next three games, and has already clocked 286 minutes on the pitch.

With three goals and an assist to his name, there is good reason for keeping Mane in the side, but in his column for the Telegraph last week, Carragher expressed his concern that the winger could suffer burnout.

“You cannot keep defying your body and my worry is that there will be a drop-off without a rest,” the ex-Liverpool defender wrote.

There is a clear reliance on Mane, as one of the Reds’ best players, and it could be argued that he is being overused after such a short post-season holiday.

But Klopp has criticised Carragher’s comments, joking that he would enjoy life as a pundit and stressing that there are provisions in place to keep Mane sharp—with the September international break an important milestone.

“I would love to hear Jamie Carragher if I had left Sadio out. This punditry is a world-class business,” he said.

“I have to think about if I do it after my management career, because you can say whatever you want and you always put a finger in something.

“So yes, we try with Sadio. I did it [in the second half against Arsenal].

“I took him off and he doesn’t have to go away on international duty this time which will help him. We have an eye on it.”

Mane has regularly claimed he believes tiredness is in the mind, and the 27-year-old’s remarkable fitness allows Klopp to depend on him consistently.

The manager continued to explain that the club’s medical staff discuss fitness concerns with the players, and detailed how their approach to training is designed to avoid fatigue.

“You have to ask the players and that’s important as well,” Klopp said.

“As long as I see in their eyes that they really want it and I see it in our session in midweek, then I know. It’s about having that intensity always.

“We still only train two hours a day. In pre-season, four or five hours, but it’s not training like you are always exhausted.

“It’s making you stronger, more resilient. And if you win you don’t feel it like you do when you lose.”

Though Mane’s form makes him difficult to omit, it can be argued that the likes of Divock Origi and Xherdan Shaqiri could come in after the international break to give him, Mohamed Salah and Roberto Firmino a rest.

Liverpool will enter the League Cup third round at the end of September, and it is likely Klopp makes a host of changes for that clash.