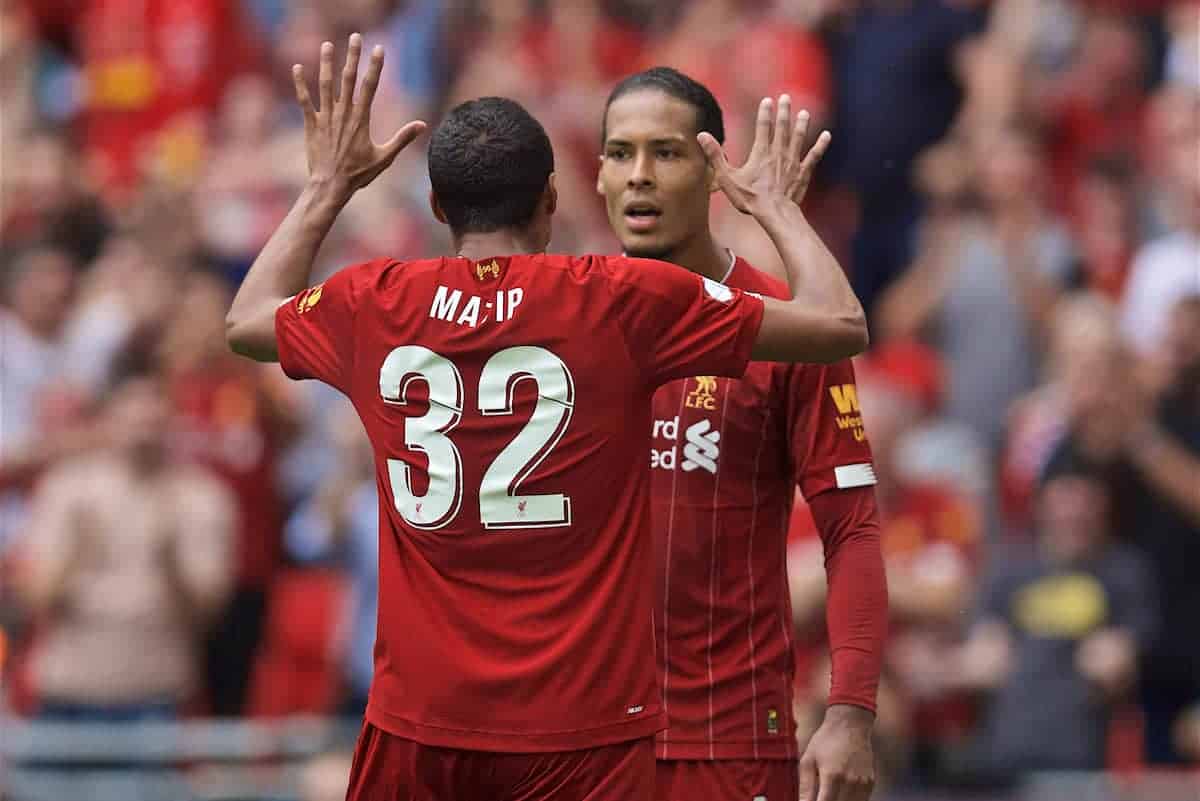 Jurgen Klopp has stressed the importance of two weeks of uninterrupted training at Melwood, with its impact on Liverpool’s defensive record particularly key.

The Reds conceded just 22 goals in the Premier League in 2018/19, the fewest of any side, but after two games this campaign they have already shipped two.

A perceived change in approach, including a higher line, has prompted concern among supporters, with the likes of Virgil van Dijk, Joel Matip and Joe Gomez not able to produce the rigid performances expected after last term.

But this has come in a busy start which saw the Reds play three times in nine days, including a draining 120 minutes and penalties against Chelsea in Istanbul.

And after the hard-fought 2-1 win at Southampton last Saturday, in which Alex Oxlade-Chamberlain impressed in midfield, Liverpool have been able to work more consistently on the training pitch with just one game a week.

Speaking ahead of the visit of Arsenal—after which there another six days before a trip to Burnley—Klopp used the No. 15 as example of how this period is “really important.”

“These are the two weeks—this week is nearly gone, but the next week as well—where we have a full week to train,” he told reporters.

“To make the players pretty much fit for the rest of the season, with proper sessions.

“Then we have the two games. These two games are very, very important obviously, but not the only games we have to play.

“So Alex is, I would say, in the best shape I can remember, because it’s long ago before we got injured.

“All looks good, not only physically in a good shape, mentally very good, all that stuff.

More often than not, training in the busier periods—with two games a week—largely revolves around fitness and recovery, but Klopp explained how this fortnight differs.

“We believe in training, so we hope we can see the impact. If we cannot see it tomorrow we should see it in the next couple of weeks,” he continued.

“It’s like it is, you work on a lot of tactical stuff. Tactical work is actually always possible but you have, kind of, 20 minutes usually.

“That’s not really cool, so this week we had today, yesterday and the day before yesterday, so three days where we could pretty much work on everything which we thought we have to improve on.

“It’s all the things we have to do during the season, and that’d really good.

“We said at the beginning of the week this is now really important that we use it.

“And I expect 100 percent concentration in all these sessions, and that’s what the boys showed.

“But in the end we still have to play tomorrow against Arsenal, they probably didn’t sleep the last week, they did very important things for them as well.

“So it’s like it should be: it’s a big opponent, a very strong opponent, it’s Anfield, it’s us, so I’m looking forward to it.”

On the subject of his defence, Klopp compared the current situation to that of 12 months ago, adding that “we know we can improve” as he tipped his side to do just that.

“Parts of it I was really happy with. I think we spoke about [the same thing] last year at the beginning of the season,” he reflected.

“We had sensational results, but everybody was talking to me about the kind of performances, ‘it’s not like the year before’ and all that stuff.

“To make the next step, first we have to reach the level of last year, the last level you had, if you want.

“That’s what we are trying to do, but that doesn’t that we start [like that].

“If we were perfect in defending in some games in the late part of last season, it doesn’t mean after the summer break, with all the different things the boys have to do, it’s immediately like this as well.

“We know we can improve that, but it’s not about being perfect in the beginning, it’s about being ready.

“And we were ready, 100 percent. We work on being perfect. We will never reach it, but we still work on it, and that’s what we do.”