Liverpool beat Norwich 4-1 at Anfield on Friday night to open their Premier League season in style – two attackers were picked out as the Reds’ star men.

Jurgen Klopp‘s men hosted the Canaries in front of a buoyant home crowd, who welcomed their Champions League-winning heroes back to league action.

A hugely entertaining half actually saw Norwich give a good account of themselves in an attacking sense, only to fall apart defensively.

Grant Hanley sliced into his own net to open the scoring, before Mohamed Salah, Virgil van Dijk and Divock Origi took the game away from Daniel Farke’s newcomers before half-time.

It was a comfortable three points, and although Alisson‘s injury and defensive shakiness did take the edge off the win – Teemu Pukki pulled a goal back – there was still resounding positivity post-match.

For the first time this season, we compare our player ratings with those from the Liverpool Echo, the Mirror, the Independent, the Daily Express, The Redmen TV, FotMob and the TIA readers. 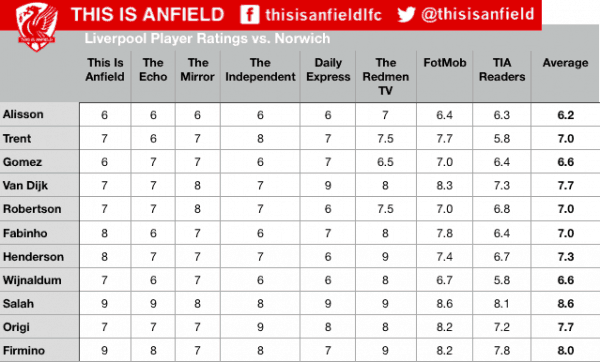 Salah (8.6) came out on top in the average ratings, with Liverpool’s No.11 making a sparkling start to the season.

This is Anfield’s Joanna Durkan described the Egyptian as “razor-sharp from the off”, as he bagged his first goal of the campaign in quickfire time.

Ian Doyle of the Echo joked that Salah had assumed “the Suarez role of terrorising Norwich“, while the Mirror‘s David Maddock felt the visitors were “terrified” of his speed all evening.

If Salah was the Man of the Match in the eyes of many, Roberto Firmino (8.0) also had his fair share of admirers.

The Brazilian was superb at Anfield and The Redmen TV highlighted that he was “persistent in the press” and “tenacious around the field”.

Durkan thought Firmino was Liverpool’s best player, describing him as “a cut above the rest” and also “integral” to the Reds’ approach.

In terms of those who weren’t quite at the races, Joe Gomez (6.6) ended up with a relatively low average rating.

Doyle correctly pointed out that the 22-year-old was “caught dozing defensively on more than one occasion” – he was arguably fortunate to start in place of Joel Matip.

The Independent felt Trent Alexander-Arnold (7.0) was also “exploited defensively” and his overall mark was probably a little higher than his display merited.

Next up for Liverpool is Wednesday’s UEFA Super Cup clash with Chelsea in Istanbul, as the Reds aim for more trophy success.