Bournemouth are reportedly in talks with Liverpool over a loan deal for Harry Wilson, ahead of Thursday’s transfer deadline.

The 22-year-old Welshman enjoyed a successful season loan at Derby County in the Championship last season and some supporters had been hoping he would remain at Liverpool this season as part of Jurgen Klopp‘s first-team squad.

However, he wasn’t in the squad for Sunday’s Community Shield and Klopp appears happy to allow him to leave.

Several clubs have been credited with an interest in the left-footer, but it now appears Bournemouth are the frontrunners.

The south coast side are seeking a replacement for David Brooks, who is facing three months out, as reported by the Mail’s Dominic King on Monday night.

Last week, Klopp hinted that Wilson would be leaving, saying: “We will see what happens in the next eight or nine days until the window closes.

“We are in constant conversations, that’s clear. We have to do the right thing for us and for the boy.

“He is obviously a really good player and I was really happy with him in the whole pre-season.”

Clearly, then, the manager sees the right thing for the player being more playing time elsewhere. 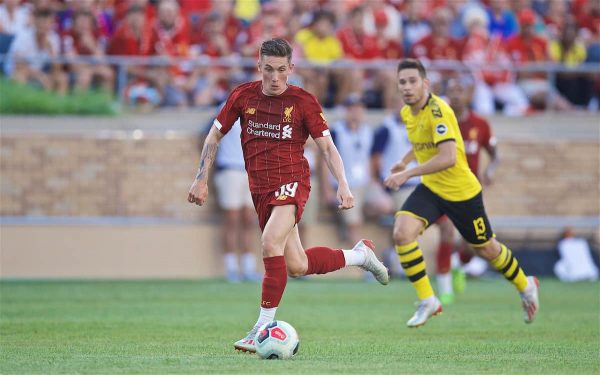 Liverpool have a good relationship with Bournemouth, who have signed Dominic Solanke, Jordon Ibe and Brad Smith in recent years, plus the loan of Nathaniel Clyne last season.

Wilson isn’t expected to be the only one heading out at Anfield in the coming days before the transfer deadline, with Ryan Kent expected to move to Leeds United, and young midfielder Herbie Kane also to head out of the club.

Since the start of the summer, Liverpool have been claimed to have an interest in bringing in an attacking player who can deputise for Sadio Mane, for around the £20 million mark – whether such a signing arrives in the next few days we will have to wait to find out, but allowing Wilson to leave could hint at such a possibility.