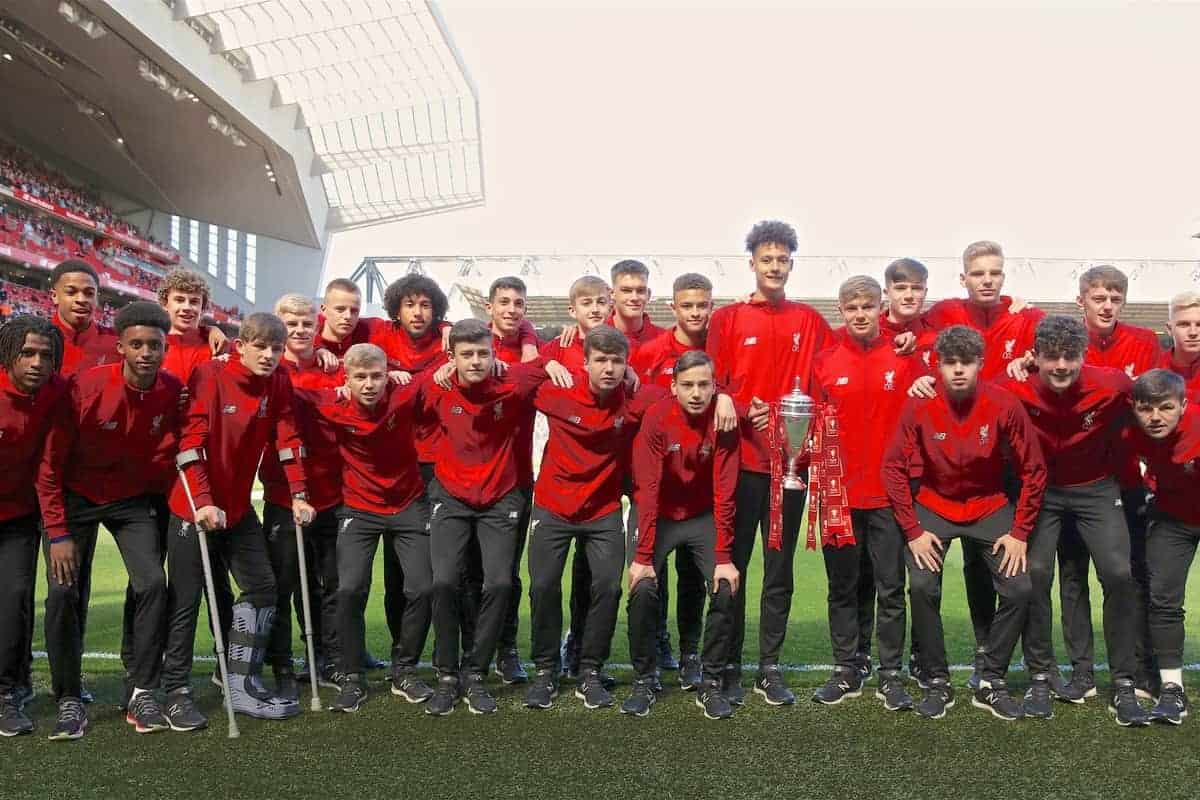 Seven new faces joined the Liverpool U19s as they finished fourth in the Oberndorf tournament, as Barry Lewtas‘ U18s squad for 2019/20 becomes clear.

The young Reds were invited to the youth cup alongside the likes of Tottenham, Gremio and Schalke 04, as their pre-season preparations come to a head.

Liverpool’s U18s are back in league action on Saturday morning when they head to Blackburn, and after victories over Burton, Bury and Celtic, and a loss to Anderlecht, this provided a perfect opportunity to test themselves.

Among Neil Critchley‘s side were a host of last season’s regulars including Leighton Clarkson, Jake Cain, Elijah Dixon-Bonner and Tom Clayton, plus under-23s staple Neco Williams and some who were closing in on their breakthrough.

More interesting, though, were the signs of those to be promoted from further down the youth ranks as the stars of 2018/19 move up.

What a moment. Driving thru Beffendorf in Germany and spotted these chaps on their way to Oberndorf for a match. Only the @LFC under 19s. What are the chances. I was physically shaking. Completely made my holiday. A moment I'll never forget. Nice group of chaps. #YNWA pic.twitter.com/cuqej5zXzM

Seven took part in the Oberndorf tournament, with some top prospects expected to take to the field in the U18 Premier League.

Jarell Quansah steps up to help fill the void left by Rhys Williams, who made his first foray into senior professional football to play all 90 minutes in loan side Kidderminster Harriers’ 2-2 draw with Leamington on Saturday.

In midfield, Thomas Hill, James Norris and Max Woltman add to the numbers, while Dominic Corness, Sean Wilson and Layton Stewart could all be competing for roles in attack.

There are particularly high hopes for Stewart, who will be tasked with taking over the goalscoring burden following the rise of Paul Glatzel and Bobby Duncan.

Others who weren’t present at the tournament but could be among Lewtas’ U18s this season are summer signing Conor Bradley and promising forward Oakley Cannonier.

Cannonier rose to prominence during the first team’s run to the Champions League final: the 14-year-old was the ball boy whose quick thinking allowed Trent Alexander-Arnold to set up Divock Origi in the 4-0 win over Barcelona.

Liverpool were not as successful in Oberndorf am Neckar, though, finishing fourth after a 1-0 loss to Schalke in the third-place playoff.

Ben Winterbottom, the 18-year-old signed from Blackburn in March, was named Goalkeeper of the Tournament.