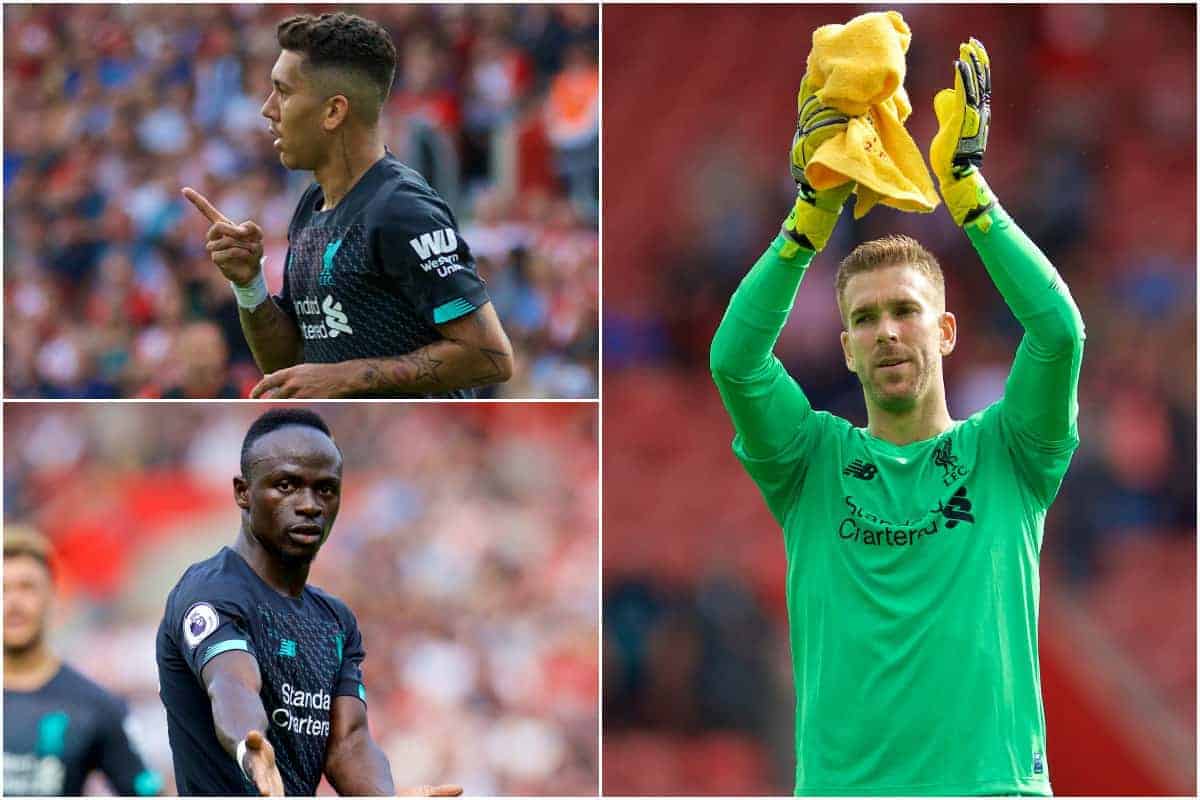 Liverpool fought hard for a 2-1 win over Southampton on Saturday, in a game which raised both positives and negatives for Jurgen Klopp to consider.

Goals from Sadio Mane and Roberto Firmino were enough to secure back-to-back victories in the Premier League for the Reds, but that does not tell an accurate story of the game.

For much of the opening 45 minutes, Klopp’s side struggled for fluency on the ball and, in particular, at the back with a disorganised group struggled to shield stand-in stopper Adrian.

Adrian himself was far from perfect, with the Spaniard caught by Southampton‘s energetic forward line on a number of occasions when dallying on the ball, and Danny Ings‘ second-half charge saw Liverpool’s No. 13 concede embarrassingly.

With a week until their next outing at home to Arsenal there is plenty of time for the Reds to work on the training pitch.

So what can Klopp and his backroom staff from this game, for better or worse?

This Is Anfield’s Jack Lusby (@jacklusby_) was joined by The Redmen TV’s Ste Hoare (@stehoare) and Danish site Redmen Family’s Patrick Pilov (@PatrickPilov) to discuss the highs and lows from St Mary’s.

STE: Although it was a tight game, one where Liverpool looked sloppy at times, there were actually quite a few positives.

I thought Ox looked more like his old self playing in midfield, which was great to see.

The biggest positive, though, was once again the front three.

Having three genuine world-class attackers means that Liverpool can score goals even when they aren’t playing particularly well.

All three had moments of just pure brilliance that helped win that game.

No, Salah did not have his best game, but in the second half we created loads of chances.

Mane especially looks like he has a point to prove from the beginning of the season, while Firmino has looked like he has got a taste for winning trophies and is more ready than he has ever been before.

We are now two games into the Premier League and all three of them are on the scoresheet already.

Situations and circumstances might be difficult but world class can never be denied, which was clearly the case yesterday.

People saying we are playing bad might have a case to their argument, but imagine how Salah, Mane and Firmino will turn defenders’ lives into nightmares when we start playing well and are firing on all cylinders.

JACK: It was a very difficult game, and watching from the stands at St Mary’s it was clear the rigours of Wednesday night were having an impact.

One of those to struggle in Istanbul was my standout positive, however, with Ox much more effective deployed in his favoured midfield role.

It wasn’t his best performance by a stretch, but there were clear signs that he could get back to the form that made him a key fixture in 2017/18.

Obviously Mane’s strike was excellent too; I was sat basically in line with the No. 10 as he cut inside and curled it beyond Angus Gunn, and it looked like a certain goal as soon as he picked it up.

The second half was much better, too, and the sight of four, five or even six Reds flooding forward on the counter-attack is a joy.

STE: I still think Liverpool are conceding far too many good chances that better teams will exploit.

Yoshida’s header and Ings’ shocking miss are two examples that really should have been goals.

I can’t quite put my finger on what’s allowing opponents to create some excellent chances against us but it is a concern.

I know he took a blow to the head that may have had an impact in his performance, but for the second game in a row, Milner looked like a 33-year-old man playing as a central midfielder in a Premier League game.

He just looked half a yard short in terms of his tackling and his use of the ball wasn’t really up to standard either.

PATRICK: The midfield looks completely out of sorts.

I am not sure if it is a tactical change by Klopp or it is rhythm, but the volume in midfield is missing.

We are clearly standing with a very high defensive line, which we are often very good at, but with wanting to play out from the back, two of our three midfielders often seek the line of our defence whilst our full-backs pace forward.

This creates acres of space for the opponent to operate in within the midfield when they regain the ball, and it looks set to catch us on our heels.

The last pass or second-to-last pass becomes much easier for our opponents with our midfielders being either on the wings or in our defensive line.

JACK: The obvious defensive issues were still there, and while Van Dijk improved as the game went on, there was a clear lack of organisation at the back.

I though Matip had one of his poorer games, and particularly struggled up against the pace and physicality of Che Adams—since he and Gomez seem to be rotated at this stage of the season, this was a game better suited to the latter.

Milner was out of sorts too, as Ste noted, and it certainly appears time is catching up with him.

Another negative for me, in a way, is the lack of variety in Klopp’s changes.

That’s three games now that Shaqiri hasn’t made it onto the pitch, and while the qualities Origi can offer are much different, surely there’s a case to argue our No. 23 should be involved more.

And should we be concerned after Adrian’s shaky display?

The error was so bad that you can’t really put too much stock into it.

All good goalies have howlers—see Ederson against Spurs or Tom Heaton against Bournemouth as examples.

I think, like Alisson did after Leicester away last season, Adrian will learn from that and not do it again. I’d be more worried if the fundamentals of his game looked poor; his positioning, handling etc.

However, I thought his goalkeeping was actually very good. The instinctive save from Yoshida’s header was excellent, he made some other good saves and his positioning looked solid too.

As backup goalkeepers go, he seems like a decent one.

Someone just needs to put a rocket up his backside about his kicking though! Attackers will constantly be pressuring him now after seeing the Southampton goal.

PATRICK: Alisson has made a couple of mistakes, as have Mignolet, Karius and now Adrian.

The difference is that Mignolet and Karius made mistakes as goalkeepers and Adrian’s mistakes came with his footwork.

Is there a huge gap from Alisson to Adrian? Most definitely! Is it something we should be worried about? Not too much.

Adrian is our second ‘keeper for a reason, and while he does not seem to be able to kick the ball past the halfway line when it is on the ground, it is something that can be worked on.

It is not his goalkeeping skills which are the problem: he does not have to change his style of play fundamentally, he just needs to play the ball more safely and with no risks.

We are going to miss Alisson’s ability with his feet, but it is important to remember that Adrian is not taking over from our Brazilian he is a stand-in.

They do not have the same style of play and that is something that Adrian, Klopp, the rest of the team and all of the fans will have to adapt to, as long as Alisson is out.

JACK: Ste’s latter point is the one that immediately struck me after Ings’ goal.

The atmosphere in St Mary’s was amplified in the minutes after Adrian‘s costly error (I specify, as there were a few others) and it’s clear this will be a flaw both opposition players and fans will target.

His use of the ball throughout was tough to watch, and reminded me of those Premier League games Karius played in his troubled first season.

However, I agree with both Ste and Patrick that Adrian is still a capable stand-in, and it’s unfair to compare him to Alisson.

But the sooner we get the Brazilian back, the better…