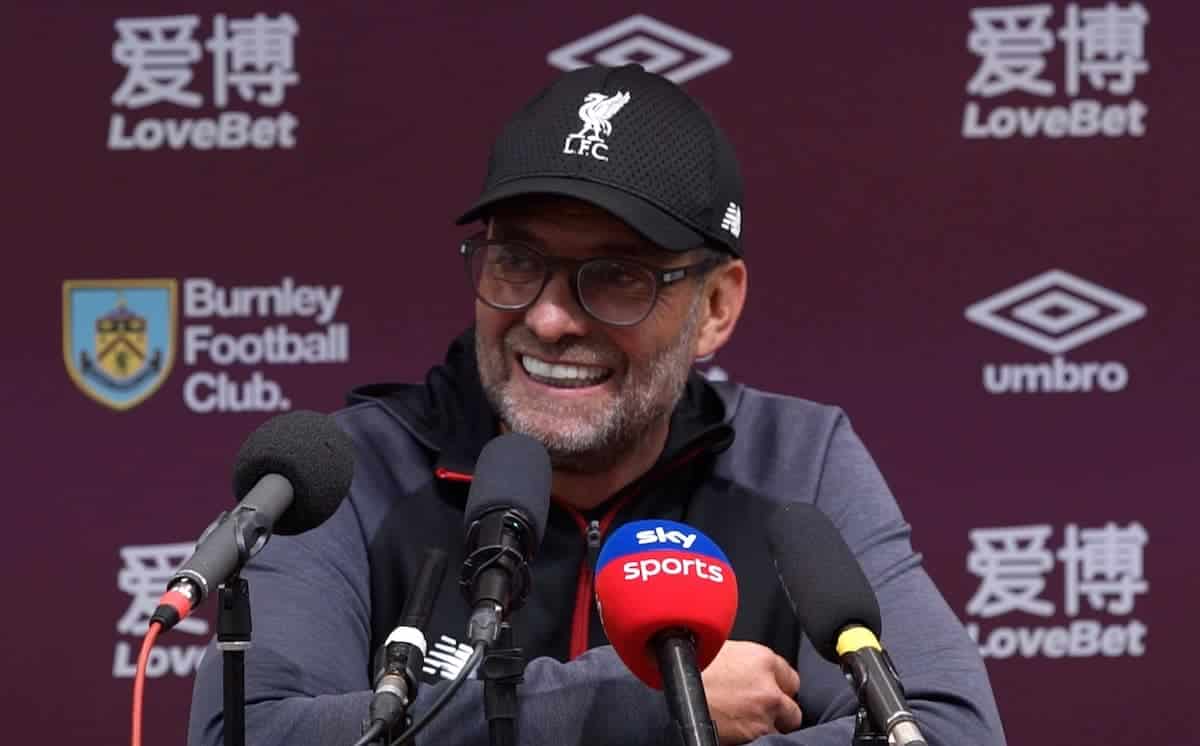 Jurgen Klopp reflected on a record-breaking victory for his Liverpool side on Saturday, with a 3-0 win at Burnley their 13th in a row in the Premier League.

An own goal from Chris Wood and further strikes from Sadio Mane and Roberto Firmino ensured a 100 percent winning start to the campaign heading into the September international break.

After a slow start at Turf Moor, the Reds followed a similar pattern to their previous outings this season so far, controlling the game as they picked their openings well.

Speaking in his post-match press conference, Klopp gave his take on a performance that helped Liverpool break a 29-year record set by Kenny Dalglish‘s side.

“I don’t feel proud in the moment, but I’m happy,” he told reporters.

“These records, I’m not sure how old they are. It’s really nice.

“But we don’t go for these records, this team wants to write their own stories and they want to create their own history.

“For one it’s the number, 13 games in a row; the other thing is, in the 13th game of that series, showing the attitude the boys did today, that makes it all [better].

“You have to show respect to all opponents, and the boys do that with attitude. So much pressure on the opponent again, so difficult for Burnley to do exactly what they want to do.

“They still can do it from time to time, but then we are there to defend it.

“We put speed into the game, we are creative, there are so many different things in the game and still space for improvement, which is cool.

“Now we have to pray and hope again that they all come back healthy, then the most intense period of the season starts already.”

Klopp was also asked about Mane’s visible protest from the substitutes’ bench after Mohamed Salah failed to square it to him for an easy goal at 3-0, but the manager stressed that “it’s all good.”

“He was upset, that was obvious. Sadio cannot hide his emotions, I like that,” he explained.

“We spoke about it, everything is fine. We are individuals, we are emotional.

“It was a situation in the game obviously—what else could happen? It was not a phone call. That’s then completely fine.

“Would he do it exactly the same manner again? Probably not. But it happened, he didn’t say any wrong words, it just looked a little bit different to how it looks usually.

“I can understand that’s a little story, thank god we are now away for a week so if you write something about it we will not read it anyway.

“Then after a week nobody can remember it anymore, so it’s a really cool moment to do it. It’s all good, really. All fine.”