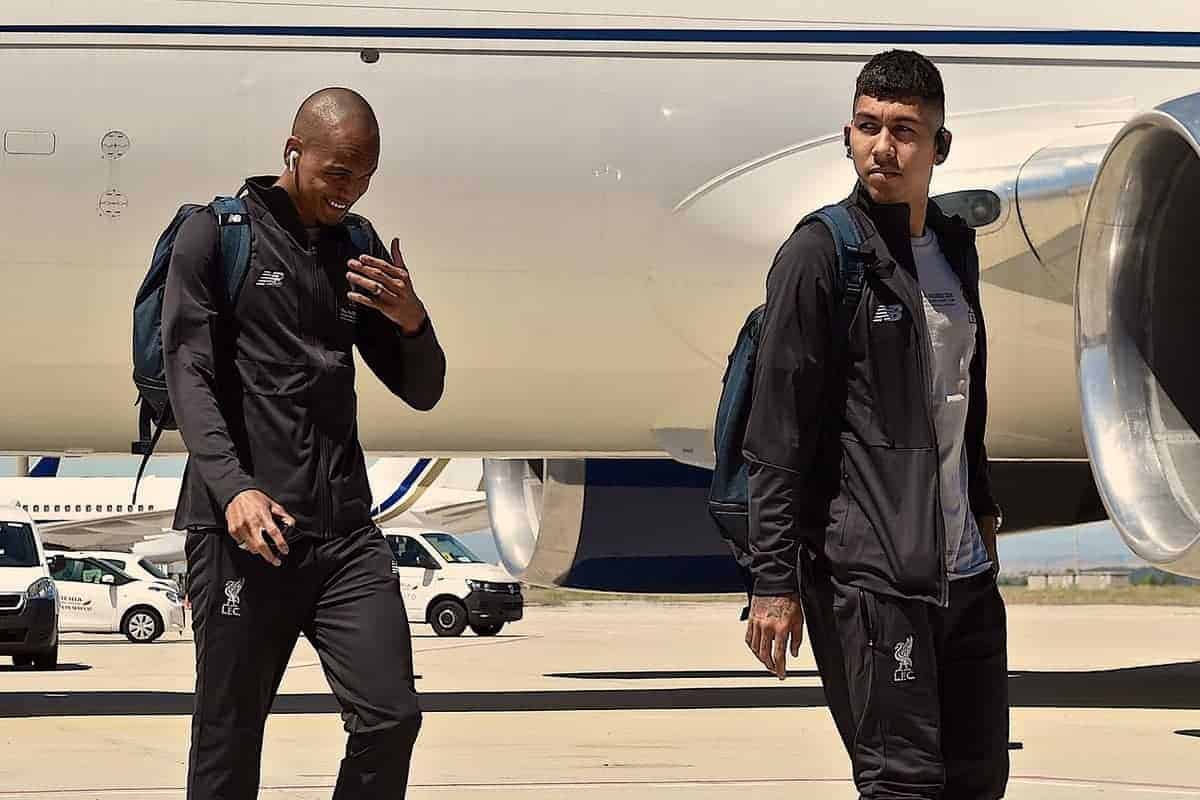 Fabinho and Roberto Firmino are on their way back to Liverpool from the United States, after they both featured in Brazil’s 1-0 defeat to Peru on Wednesday.

The Reds duo were in action in the early hours in UK time, as Tite’s Selecao took on Peru in a friendly in Los Angeles.

Firmino led the line in his second start of the international break and was brought off just after the hour mark, with Fabinho replacing Casemiro at the same time.

It was Fabinho‘s first appearance for Brazil since a three-minute outing against the Czech Republic in March, and was remarkably the longest he has been afforded in his natural role in midfield.

But it ended in defeat, with Luis Abram netting late to compound a disappointing game for Brazil, who started without Neymar.

It is likely that Fabinho and Firmino, along with Ederson and Richarlison, will have headed back to England on a chartered flight soon after full-time, as is typically the case with Brazil’s Premier League contingent.

Elsewhere, Caoimhin Kelleher caught the eye with his confident footwork as the Republic of Ireland under-21s sealed a 3-1 victory over Sweden on Tuesday:

The 20-year-old has spoken of his ambition to learn from Alisson in his role as backup goalkeeper at Liverpool, and he is clearly picking up on the Brazilian’s confidence on the ball.

Kelleher’s clipped pass out wide also sparked Ireland’s goal in the 1-0 win over Armenia last Friday, and he will return to Merseyside buoyed by his displays, as he prepares to take his place on the bench against Newcastle.

Kamil Grabara kept his second clean sheet of the international break as the Poland under-21s ran out 4-0 victors at home to Estonia, topping Group E as their U21 Euro qualifiers begin.

Both James Norris and Harvey Elliott started in the England under-17s’ penalty-shootout win over Poland to lift the Syrenka Cup, with Jarell Quansah an unused substitute:

Elliott opened the scoring in the initial 2-2 draw, converting the spot-kick he was award early on, while Norris netting his in the shootout to help the Young Lions to a 3-1 victory.

Sepp van den Berg played the full 90 minutes as the Netherlands under-19s produced a 4-0 win at home to Portugal, though the 17-year-old was not without fault despite the clean sheet.

It was Van den Berg’s short backpass which led to a Portugal penalty early in the second half, but fortunately Mees Bakker was on hand to make the save.

Taiwo Awoniyi scored as the Nigeria under-23s booked their place at the Africa U23 Cup of Nations with a 5-0 triumph over Sudan, progressing to the tournament via a 5-1 aggregate scoreline as the Mainz loanee found the back of the net.

And finally, Layton Stewart came off the bench for the final half-hour as the England under-18s beat South Korea 2-0, and had a penalty saved before blasting the rebound over the bar.