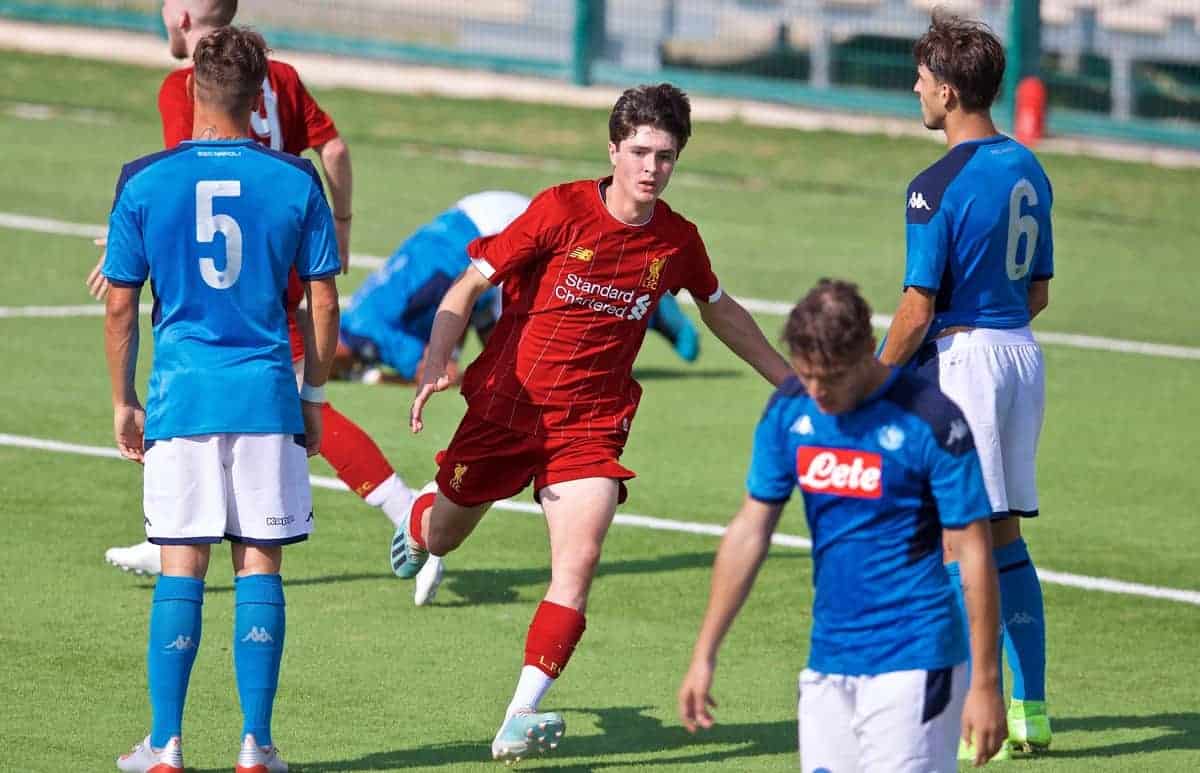 The Liverpool under-19s fought back from a disappointing first half to draw 1-1 with Napoli in their opening group game of the UEFA Youth League on Tuesday.

Despite the call-up of Rhian Brewster to the first-team squad for Tuesday night’s Champions League opener at Stadio San Paolo, Barry Lewtas was able to name a very strong U19s side in Naples.

Joined by Neil Critchley in the dugout, he deployed the same 3-5-2 setup that saw his under-18s side lost 5-2 at Man City on Saturday, with Ki-Jana Hoever at centre-back and the unorthodox pairing of Curtis Jones and Harvey Elliott up front.

It was a difficult start for the young Reds, with Hoever required to make a blocked to divert a goal-bound shot wide, before Neco Williams struck the bar with a header from Yasser Larouci‘s cross.

Napoli went a goal up on the half-hour, with Vincenzo Mancino stroking home from a smart cut-back, from a similar situation that saw the inexperienced hosts thwarted earlier on.

That proved the decisive moment of the first half, with Lewtas’ new formation requiring time for the likes of Jones and Elliott to settle, and Liverpool needing more from Jake Cain and Elijah Dixon-Bonner in the middle.

Liverpool started the second half with more urgency, and Elliott had a brilliant opportunity to level after a charging run from Jones down the left.

But under pressure from a sliding defender the 16-year-old skied his shot over the bar from two yards out when the goal was gaping, leaving Elliott with his head in his hands.

The visitors came close again just before the hour mark, and it was a swift burst from Leighton Clarkson that brought the opening, with the teenager—who has joined senior training in recent weeks—blasting against the post.

An injury suffered in a 50-50 forced Larouci off soon after, as James Norris took his place, while the increasingly influential Dixon-Bonner made way for a pure striker in Layton Stewart on the 70-minute mark.

The presence of Stewart saw Jones grow more influential, with Lewtas changing formation to a more cohesive 4-2-3-1, and it was the incoming striker who eventually equalised, touching in Elliott’s hopeful ball at the far post.

The young Reds then pushed hard for a winner, and will have been disappointed to only come away with a point after a spirited comeback in the second half.