Liverpool cruised past MK Dons in the League Cup third round on Wednesday night, with James Milner and Harvey Elliott the Reds’ star men.

Jurgen Klopp made 11 changes at Stadium MK, allowing his key men a rest after their weekend excursions away to Chelsea.

Liverpool still eased into round four, though, as a young side featuring three debutants got the better of their League One opponents.

James Milner struck just before half-time, helped hugely by a dreadful goalkeeping error, before Ki-Jana Hoever headed home in the second half.

The Reds will host Arsenal in the fourth round, after they defeated Nottingham Forest on Tuesday evening.

Here we compare our player ratings with those from the Liverpool Echo, the Mirror, The Redmen TV, Sky Sports, The Anfield Wrap and the TIA readers. 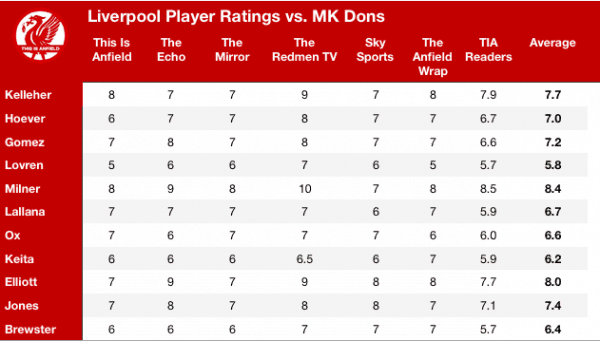 On a night that revolved around the youngsters taking centre stage, it was ‘old’ Milner (8.4) who earned the highest average rating.

The veteran shone in the left-back role he has often been forced to play in in the past, scoring the opener and assisting the second.

The Echo‘s Ian Doyle felt Milner “led by example” surrounded by teenagers, while The Redmen TV went as far as giving him a perfect 10/10 rating (a bit much).

Elliott (8.0) was fantastic on his first-ever Liverpool appearance, catching the eye with his quick feet and beautiful left foot.

This is Anfield’s Karl Matchett touched upon “some magic moments cutting in from the right and some good delivery toward the far post”, with Milner almost scoring from one inch-perfect pass.

Meanwhile, John Cross of the Mirror described Elliott’s showing as an “eye-catching debut”.

Receiving third place in the ratings was another debutant, Caoimhin Kelleher (7.7), who made some crucial saves in the second half.

Doyle liked that he showed “sufficient confidence with the ball at his feet” and Matchett also pointed out his level of calm under pressure.

It was a night to forget for Dejan Lovren (5.8), however, who took home the wooden spoon – the lowest average rating.

The Redmen TV correctly concluded that the Croatian “showed why he is fourth choice” centre-back.

Next up for Liverpool is a trip to Sheffield United on Saturday lunchtime.