A mix of the young and old secured Liverpool’s passage to the next round of the League Cup after a 2-0 win at MK Dons.

A young-looking Reds squad made their way south for the third round of the Carabao Cup against League One outfit MK Dons, aiming to qualify for the next stage of the competition for the first time since 2016/17.

Rhian Brewster, Harvey Elliott and Caoimhin Kelleher were handed their debuts for the club as Jurgen Klopp made 11 changes to the team who overcame Chelsea, while a further five uncapped players from the academy took their place on the bench.

Liverpool dominated proceedings from the off and found themselves consistently in the final third, where Elliott and Brewster both had early opportunities to open the scoring from close range.

And while the Dons had chances of their own having caught a number of Reds in possession and over the top, it was Liverpool’s continual peppering of Stuart Moore’s goal which soon reaped the desired return.

A clean and true from James Milner, one of the six senior members in the team, from the edge of the box flew straight at Moore, only for the Dons ‘keeper to fluff his lines and effectively see the ball parried into his own net – ensuring the Reds took a deserved lead into the break. 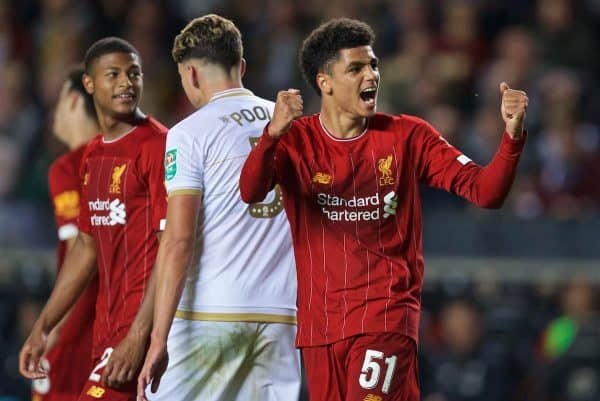 A similar pattern unfolded for much of the second 45 as possession predominantly went the way of Klopp’s side.

Milner would turn provider midway through the term after dispatching an inviting cross which was met by his fellow full-back Hoever, who nodded home for his first senior goal for the Reds.

The youngsters continued to impress from there on out, with Curtis Jones seizing his chance and Kelleher pulling out a number of top saves to keep the margin at two, while Elliott continued to show the talent which earned him his move over the summer as he again found the crossbar late on.

And after emerging unscathed from a small bout of pressure, Liverpool comfortably played out the final moments to notch their place in the fourth round of the League Cup, which is to be played out in the final week of October.

But before that, there will once again be a host of changes over the weekend as more familiar faces will lineup when Liverpool return to Premier League action with a trip to Sheffield United in the early Saturday kick-off.