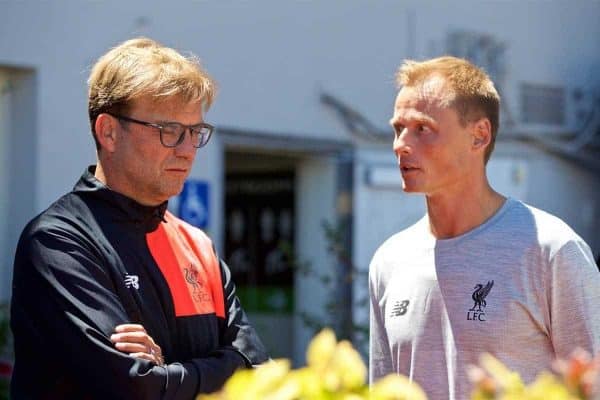 Alex Manninger turned down offer of coaching role with Liverpool

Goalkeeper Alex Manninger has revealed he turned down the offer of a coaching role at Liverpool after his one-year contract with the club expired in 2017.

Manninger joined the Reds as one of Jurgen Klopp‘s first signings in the summer of 2016, bringing vital experience to the club’s goalkeeping ranks.

The Austrian, who was 39 at the time of his signing, failed to make a single competitive appearance for Liverpool, instead providing support for Simon Mignolet and Loris Karius.

This was always to be the plan, with Manninger explaining on his arrival on a free transfer that “it’s not possible to play 50 games a year,” and he retired after his sole campaign at Anfield.

While the decision to bring the veteran in was a surprising one, the belief was that it was with the intention to become part of the coaching staff at Melwood when his career ended.

It transpires this was the case, but for Manninger that final year abroad convinced him that his post-playing life should be spent “catching up” with things he had missed out on over the previous 22 years.

“The idea was there,” he told Austrian newspaper the Krone, when asked if he could have stayed as a goalkeeping coach.

“I’m catching up with a lot of things that did not happen during my career.”

It is an interesting revelation from Manninger, suggesting he could have joined John Achterberg as part of the first-team setup, with Liverpool in search of an assistant for the Dutchman at the time.

The Reds eventually appointed Jack Robinson, who left his post with the FA in September 2018 to work alongside Achterberg as well as helping to identify and develop young goalkeepers for the future.

Manninger praised Klopp as “a coach who has understood every fibre of modern football, is straightforward [and] never seeks excuses,” and that the manager told him he needed “people with energy.”

The 42-year-old also turned out for Salzburg turning his long career, and though he backed them to “deliver a huge game,” he expects Liverpool to emerge as victors on Wednesday night.

He could have experienced this from the dugout at Anfield, but instead Manninger is deservedly enjoying his retirement.