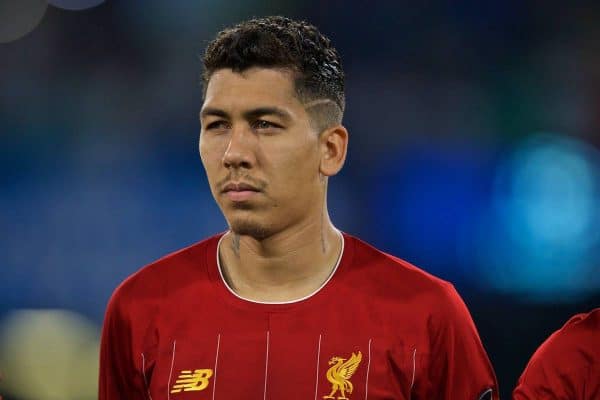 Liverpool host Red Bull Salzburg tonight in their second game of the Champions League group stage (8pm BST). Here are the key stats and facts ahead of kickoff.

This game will see Anfield stage its 100th European Cup game. Of the previous 99 Liverpool have won 70 and lost 12 with 17 draws.

Liverpool are appearing in their 44th European campaign and their 24th in the continent’s major club competition.

This will be the first time the teams have ever met in European competition.

Salzburg will be Liverpool’s 129th different opponent and the 76th they have met in this competition.

Tonight’s opponents will be the fourth from Austria to face the Reds following Austria Vienna, Swarovski Tirol and AK Graz.

Liverpool have won four of the six meetings with Austrian teams, with one draw and a defeat.

Jurgen Klopp‘s men have lost seven of the last 16 games in the Champions League and have still reached two finals.

The Reds have lost one of the last 27 at home in Europe and are unbeaten in the last 22 at Anfield.

Of the 22 they have won 16 with six draws, failing to score only twice.

Liverpool’s last home reversal was the 3-0 loss to Real Madrid in October 2014.

He scored three hat-tricks for the Austrians and was sent off four times.

He and Mane appeared on the pitch together five times (including twice in Champions League qualifiers) before Mane joined Southampton.

Roberto Firmino has played in 42 of Jurgen Klopp‘s 43 European games in charge of the Reds.

Firmino, Mane and Mo Salah have each scored 16 European goals for the Reds.

Mane’s tally has come in 28 appearances, one fewer than Salah while Firmino has played 42 times—a combined 48 goals in 99 games.

Steven Gerrard (30) has scored more European Cup goals for Liverpool than any other player. Next on the list are Salah 16, Firmino 15 and Mane 14. (Ian Rush also has 14).

Salah has scored 10 goals in 12 Champions League appearances at Anfield.

Only Gerrard (18 in 46 games) has scored more for the Reds on home turf in the competition. Firmino has eight in 12.

James Milner played against Salzburg for Man City in a 3-0 home win in the Europa League in 2010/11.

While with Celtic, Virgil van Dijk faced Salzburg during the 2014/15 Europa League campaign, the teams drawing 2-2 in Austria while Celtic lost 3-1 at Parkhead.

Liverpool have not conceded in their last five European games at Anfield since Paris Saint-Germain scored twice a year ago.

It is their best such run for more than 20 years.

The last time they kept a fifth home clean sheets in a row in Europe’s major competition prior to this sequence was in 1984.

They have never gone six.

Firmino celebrates his 28th birthday today. He shares his birthday with Alisson who is a year younger.

Should Firmino score he will be the first Liverpool player to find the net on his birthday since Daniel Sturridge who scored the only goal of the game against Man United at Anfield in September 2013.

Salzburg in the Champions League and England

This is Salzburg’s 15th season of Champions League football and their 23rd in major European competition.

This will be the third occasion Salzburg have been drawn against English opposition.

They faced Blackburn in the 2006/07 UEFA Cup, losing 4-2 on aggregate. They then met Man City in the group stage of the Europa League four years later, losing both games (2-0 at home; 3-0 away).

They have lost both visits to England conceding five times without scoring.

This is their first appearance in the Champions League group stage since 1994/95. Since then they have lost in qualifying 13 times.

It was Haaland’s fourth hat-trick of the campaign and the first time in Champions League history that a player had scored a first-half hat-trick on debut in the competition.

In that game against Genk Haaland became only the third player to score in the first two minutes of his Champions League debut after Andreas Moller (1995) and Eliaquim Mangala in 2009.

He also became the third-youngest ever to score a Champions League hat-trick, aged 19 years 58 days, behind Raul and Wayne Rooney.