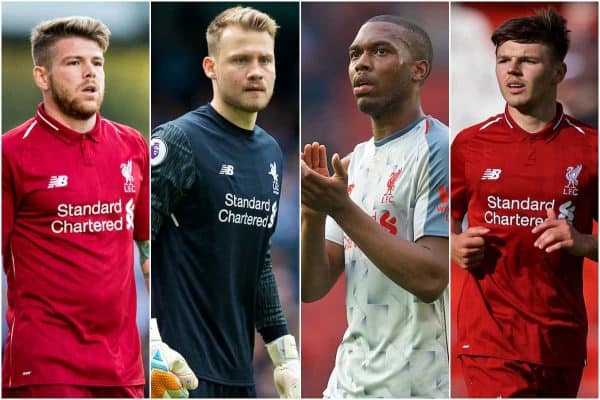 Liverpool bid farewell to an abundance of players over the summer, but how are they faring at the club they now call home?

The Reds’ transfer business has garnered widespread praise in recent years as shrewd incomings have been equally matched by cunning outgoing business.

Under Jurgen Klopp over 30 players have left Anfield, accumulating fees which have been carefully and strategically reinvested back into the squad which is now capable of consistently competing for honours.

In the summer, a handful of loyal servants, a mix of academy graduates and experienced players all moved on.

Here, we check out how those ex-Reds are getting on at their new clubs.

The 18-year-old turned heads over the summer when he sought a move away from the club after just one year in the academy, where he featured predominantly for the under-18s and under-23s—netting 30 goals in total.

The forward’s brief time in Italy to-date has seen him solely turn out for Fiorentina’s under-19 side, netting three goals in his four starting appearances.

It has proven to be a bright start for Duncan, who has now earned his debut call up to the England under-19 squad for October’s internationals, but it remains to be seen whether a clear route to the first team presents itself in Italy in the short term—which was seemingly the motivation for his departure from Anfield.

After 15 years on the books at Liverpool, Kent sought pastures new as the window of opportunity to break into Jurgen Klopp’s side had all but closed.

Linking back up with Steven Gerrard after an impressive loan spell in 2018/19, the 22-year-old has been limited to just 41 minutes of action after sustaining a hamstring injury in his first outing against Livingston in September.

So, while Kent has been unable to hit the ground running thus far, he is expected to slot straight back into the fold on the opposing wing to Liverpool loanee Sheyi Ojo upon his return following the international break.

After featuring just twice for the Reds last season, Mignolet is now thriving in his native Belgium having assumed the role of the No. 1 stopper, starting all but two of their 15 games since his arrival.

Champions League action has also been on the agenda for Mignolet, where he again came face-to-face with Real Madrid at the Bernabeu, five years on from the Reds’ 1-0 defeat—only this time he walked away with a point after Real fought back from a two-goal deficit.

He has quickly taken to life with Brugge, keeping eight clean sheets in all competitions, five of which have arrived in the Belgian top flight, where his side currently sit top of the pile.

The 20-year-old centre-back, who had been at Liverpool’s academy since the age of nine and captained the U23s last season, made the move to Holland in the hopes of a clearer route to senior football.

The Scot’s bold move has seen him place his development into the hands of ex-Manchester United central defender Jaap Stam.

And while his action on the field thus far has taken place only at under-21 level, he has found a place in Stam’s matchday squad on seven occasions to-date.

He did, however, miss out on the opportunity to reunite with former Liverpool team-mates Ojo and Kent, when Feyenoord fell to defeat on the road to Rangers in the Europa League, with Ojo netting the decisive goal.

The forward made his loan move to his boyhood club in 2018/19 permanent over the summer, where he headed into the 2019/20 season off the back of eight goals and 25 appearances in all competitions.

Ings amassed over 1,700 minutes of senior football last term, his highest return since his final season with Burnley in 2014/15, having been plagued by a number of serious injuries during his time at Anfield.

But with his injury woes now behind him, the 27-year-old has found himself competing for the starring role alongside Saints’ new signing Che Adams.

He has come out on top in recent weeks, having scored against both Tottenham and Chelsea in the league, adding to his goals against Brighton and Liverpool.

A return to his native Spain has yet see Moreno hit the ground running as a hamstring injury initially delayed his debut until the second matchday, before he sustained ankle ligament damage and a calf strain in training soon after.

The left-back had displaced former Barcelona youth player Xavi Quintilla to make his full debut against Levante before injury struck, where he is expected to return soon after the international break following over seven weeks on the sidelines.

It’s a run of rotten luck for Moreno, who had looked to have immediately locked down a starting berth after playing understudy to Andy Robertson in recent seasons, but reports from Spain suggest he will again usurp Quintilla when the time comes.

Turkey was the destination for Sturridge in what many viewed as a surprising move after he had received interest from various clubs in the United States and across Europe.

An ankle injury disrupted his start at his new club as no risks were taken with his fitness after a career plagued by injury woes.

It meant he had a number of cameos off the bench before earning his first start at the beginning of October in the Europa League clash with FC Basel—an opponent Sturridge twice failed to feature against with the Reds in the 2014/15 Champions League campaign due to injury.

Moreover, his appearances to-date have seen him lead the line alongside Crystal Palace loanee Alexander Sorloth, the recipient of Sturridge’s sole assist to date.

A name well-known but a face not regularly seen at Anfield in recent times, with his last appearance coming in early 2017, made a very intriguing career move to Bulgaria in the summer.

Randall has been deployed both at right-back and in central midfield in his three appearances so far, failing to make an outing in only the first game of the season.

His debut came off the bench in a defeat to Ludogorets, Liverpool’s Champions League group stage opponents in 2014/15.

Adekanye turned down a new deal with the Reds and instead linked up with former Liverpool duo Lucas Leiva and Luis Alberto in Italy.

The winger made his debut with a ten-minute spell in a narrow defeat in the Europa League, which he quickly followed up with a four-minute cameo for his first Serie A outing.

While a back injury disrupted his early days at the club, the 20-year-old has been a regular member of the first-team squad, with four features on the bench in addition to his limited minutes up until now.

His rise through the ranks has thus far vindicated his move, but there is still a long way to go to establish himself at Lazio as he is regularly competing against the likes of Ciro Immobile, Felipe Caicedo and Joaquin Correa in the forward line.

Whelan made the move across the Atlantic over the summer to join Phoenix Rising in the second tier of US football, where he has since carved out a role in the centre of defence.

The US outfit have high hopes for Whelan, who has already shown his prowess with the ball at his feet having notched an assist with a driving run out of defence and a lovely through-ball into a congested penalty area.

Interestingly, he featured once for FC Tucson in the third tier prior to his debut, as they are owned by Phoenix.

And the 21-year-old was not the only academy player to move to the US over the summer, however, as goalkeeper Ben Williams joined NAIA college side William Carey Crusaders, located in Mississippi—where he is yet to feature.

While a standout at academy level, the 19-year-old was not on Klopp’s radar and sought a return to the club where his youth career started in view of making the rise to first-team football.

Camacho’s time in the senior side at Liverpool came at right-back, but his ambitions always were to be deployed further up the field—a role on the right-wing he is now aiming to fulfil at Sporting.

A minor injury delayed the start to his season, where he has since featured for a total of three minutes off the bench for the first team while being named in the matchday squad on a further five occasions.