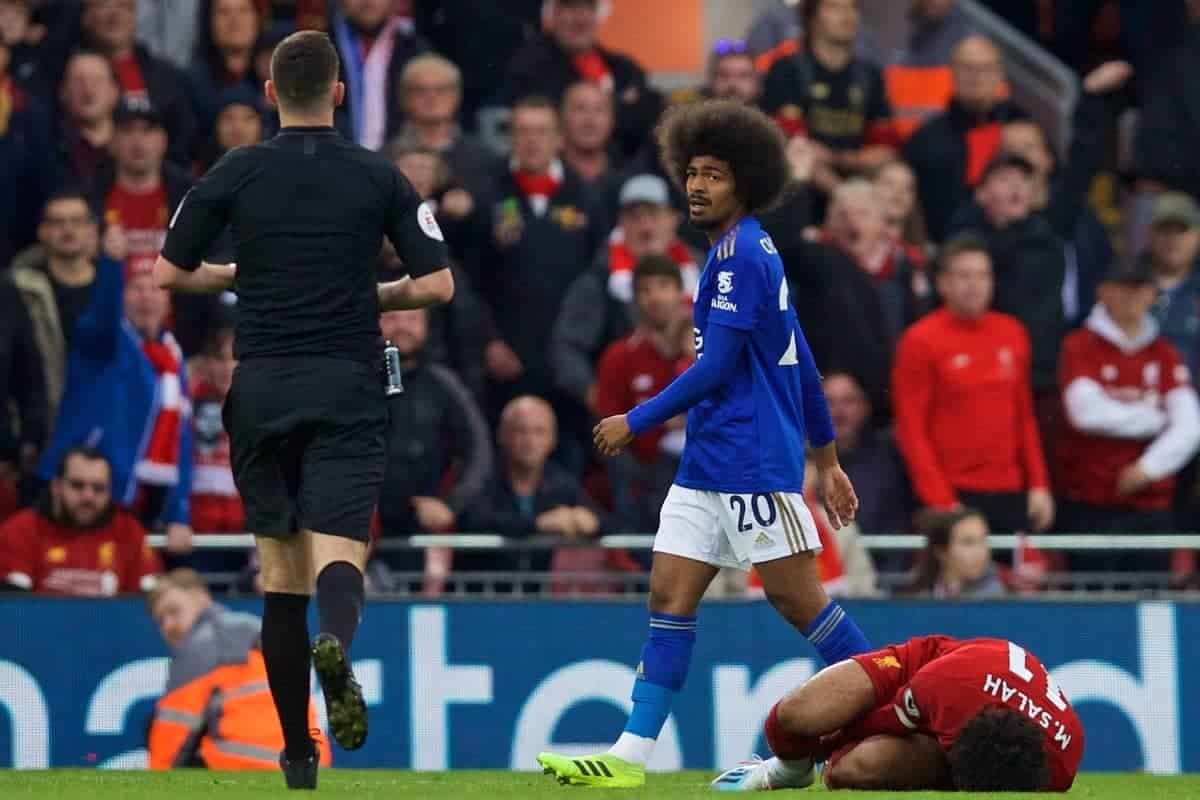 Jurgen Klopp insisted Hamza Choudhury should have been sent off for a late challenge on Mohamed Salah during Liverpool’s 2-1 victory over Leicester.

The Egyptian was replaced by Adam Lallana in the 92nd minute at Anfield on Saturday afternoon, shortly before James Milner‘s dramatic winner from the penalty spot.

It came following a poor challenge from Foxes midfielder Choudhury, whose reputation proceeds him following a similar lunge in the League Cup in August that left Newcastle‘s Matt Ritchie sidelined.

Choudhury picked up a booking during his 10-minute cameo, but fortunately—unlike Ritchie—Salah hopefully won’t face a spell out as a result.

The Mirror‘s David Maddock took to Twitter shortly after full-time to report that “initial checks have shown [the] injury [is] not serious,” and “not as bad as first appeared.”

However, the Mail‘s Dominic King spoke to Salah and he confirmed the injury was to his ankle, telling him “we will see” as to the extent.

Salah has a fortnight to recover, regardless, with the Reds now not in action again until October 20, when they visit Man United in the Premier League.

He had already been left out of the Egypt squad for their upcoming friendly against Botswana, with manager Hossam El-Badry keen to avoid overloading the new Pharaohs captain.

The 27-year-old is now set to take a short break before returning to Melwood for training with Jurgen Klopp‘s non-internationals, which will include Naby Keita after his omission from Guinea duty.

Speaking after the game, Klopp described Choudhury’s tackle as “dangerous as hell,” insisting the midfielder should have received a red card.

“It’s just a challenge which I really don’t understand, to be honest,” he told reporters.

“How he can do it, the ball is far away, a player who is in full sprint, if you bring him down without the ball around, for me there’s only one colour [card].

“But I know, I see it in your eyes that I’m the only one who sees it like this, but it’s dangerous as hell.

“He’s a super player, super development in the last one or two years at Leicester, but these kinds of challenges, no.

“It’s not obvious, where everybody says ‘red!’, it’s just from a football point of view: if you are quick, you need to make sure, somebody to make sure for you, that it’s not allowed to bring you down.

“If somebody goes with a hand there, it’s a yellow card; but if somebody comes like this and the ball is not even close, I don’t know how that cannot be [a red].

“I only need two eyes to see that, you don’t have to be educated.”

Meanwhile, Brendan Rodgers said: “Hamza is an honest boy. I don’t think there was anything malicious in it.”

The club are likely to provide a more accurate assessment of Salah’s injury in the coming days.