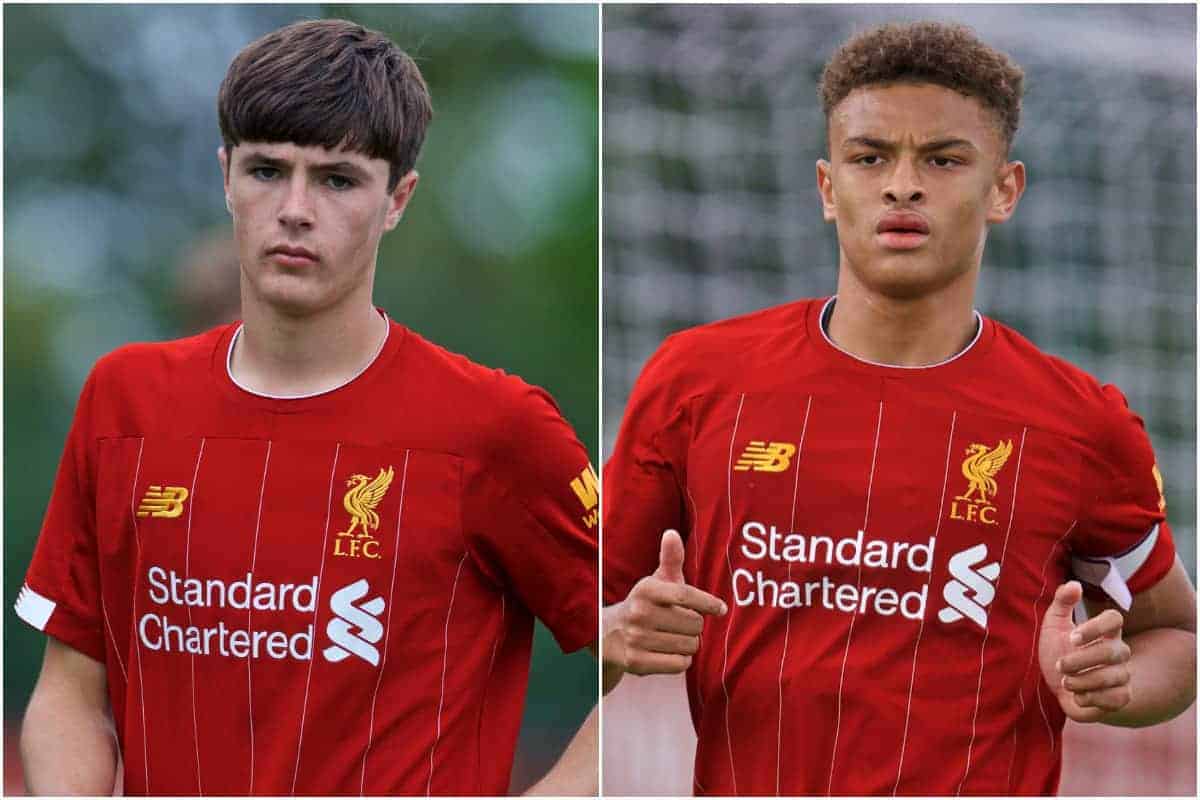 With Bobby Duncan gone and Paul Glatzel injured, a pair of young strikers have stepped up to take over the goalscoring burden for the Liverpool under-18s.

It is a reality that Barry Lewtas will be becoming accustomed to, but perhaps not to this scale before.

As a youth coach at a top-level club, Lewtas’ brief is constant, with the tools provided ever-changing, and over the summer he saw two players who scored 59 goals between them in 2018/19 leave his ranks.

Glatzel and Duncan forged a strong partnership in their only season together at Liverpool, with the pair also laying on a combined 26 assists in a phenomenal campaign.

But a crippling ACL injury and a controversial move to Fiorentina later, and Lewtas was left with no uncertainty over whether he could call upon his prolific forward pairing again.

Both were too consistently strong to stay in the U18s for long, and Jurgen Klopp has already revealed his plans to include Glatzel in his first-team setup on his recovery in 2020.

A succession plan will have been in place long before their departures from Kirkby—fortunately, it is paying off handsomely so far.

The U18s began the campaign with a makeshift duo up front, with the newly promoted Layton Stewart and James Balagizi starting in the 7-1 victory at Blackburn on the opening day and the following 3-2 win over Stoke.

They both netted braces against Rovers, and Stewart downed the Potters with an 88th-minute winner, with the support of natural attacking midfielder Balagizi providing a welcome contrast to his direct approach.

Fidel O’Rourke took Balagizi’s place at half-time in that clash with Stoke, however, with the 17-year-old returning from injury and keeping his place ever since.

Now established as Lewtas’ first-choice strikers, O’Rourke and Stewart have produced an impressive run of form in front of goal which suggests they can step up in the absence of Glatzel and Duncan.

A Scouser raised in Huyton, Stewart joined the Reds as a seven-year-old, and has been earmarked for a swift rise through the ranks.

He was given his first taste of life in the U18s by Steven Gerrard, but now 17, is part of the squad on a full-time basis, along with sporadic outings for the under-19s in the UEFA Youth League and under-21s in the EFL Trophy.

Stewart is more in the mould of Duncan: an out-and-out No. 9 whose predatory instinct is being nurtured to encompass a more diverse, all-round approach.

“Layton is maturing and has to understand sometimes it’s about his all-round game and development,” Lewtas explained after the young Reds’ 6-1 thrashing of Everton in October, praising the teenager for having “put a shift in.”

The coach has lauded Stewart’s attitude and application, while he has been able to pair this with a clear end product, with six goals and three assists in 10 games so far.

… and what a strike it was ??? pic.twitter.com/wE5AWcPxgh

He has showcased a variety of finishes, but most impressive has been his ability to score crucial goals, with his acrobatic winner against Stoke followed up another decisive goal in the 88th minute as the U18s won 4-3 at home to Man United.

And in Europe, Stewart struck the equaliser in the 86th minute—just over quarter of an hour after being introduced—as the U19s held Napoli to a 1-1 draw.

These moments have shown his ability to pair natural quality with a persistence and mental fortitude.

The 17-year-old—another local lad—came through in a much different fashion to Stewart, arriving at under-14s level after being spotted playing amateur football.

He has endured a series of injury problems and was kept out of the side by Glatzel and Duncan in 2018/19, but is a player whom the coaching staff have immense faith in, so much so that he is now the U18s’ captain.

O’Rourke had already worn the armband in Glatzel’s absence last term, but is now cementing himself in his place full-time, and beyond their leadership skills there are stylistic comparisons between the two.

The teenager is a hard-running, industrious striker with a keen eye for space and the right moment to make runs and finish moves.

Lewtas described him in April as “a real trustworthy No. 9,” explaining that “you know what you’ll get from him, he’ll run in behind, he’ll link the play and he’s a pest to play against.”

Restricted to just six appearances so far this season, of which five of those have been starts, O’Rourke has already scored five goals.

Like Stewart, one of those was a crucial winner, coming in stoppage time of the 3-2 victory over Swansea in the Premier League Cup in September—having begun the fightback at 2-0 down with his 66th-minute header.

In 16 games combined, Stewart (6G, 3A) and O’Rourke (5G) already have 11 goals and three assists between them.

Only Curtis Jones (six) and Tom Hill (five) have scored as many for the academy, while only Jones and Cain (both 11) have more goals and assists combined than Stewart (nine).

The pair have hit the ground running for a Liverpool side who look set to challenge for the U18 Premier League title again this campaign, sitting second and two points behind Man City after seven games.

Both have time on their side, with Stewart only turning 17 in September and O’Rourke not celebrating his 18th birthday until February.

But if they maintain their impressive start to the campaign, the rewards have been set out for them by their predecessors: Glatzel a future first-team fixture, Duncan a £1.8 million addition to Serie A.

By mid-November last year, and the final international break of 2018, Glatzel (12) and Duncan (11) had scored 23 goals between them, doing so in 28 games combined.

That sets a lofty target, and Stewart and O’Rourke have fewer opportunities to reach it by that stage.

But that sets the benchmark for Liverpool’s new forward duo, and after a strong start they can hope to keep it up.