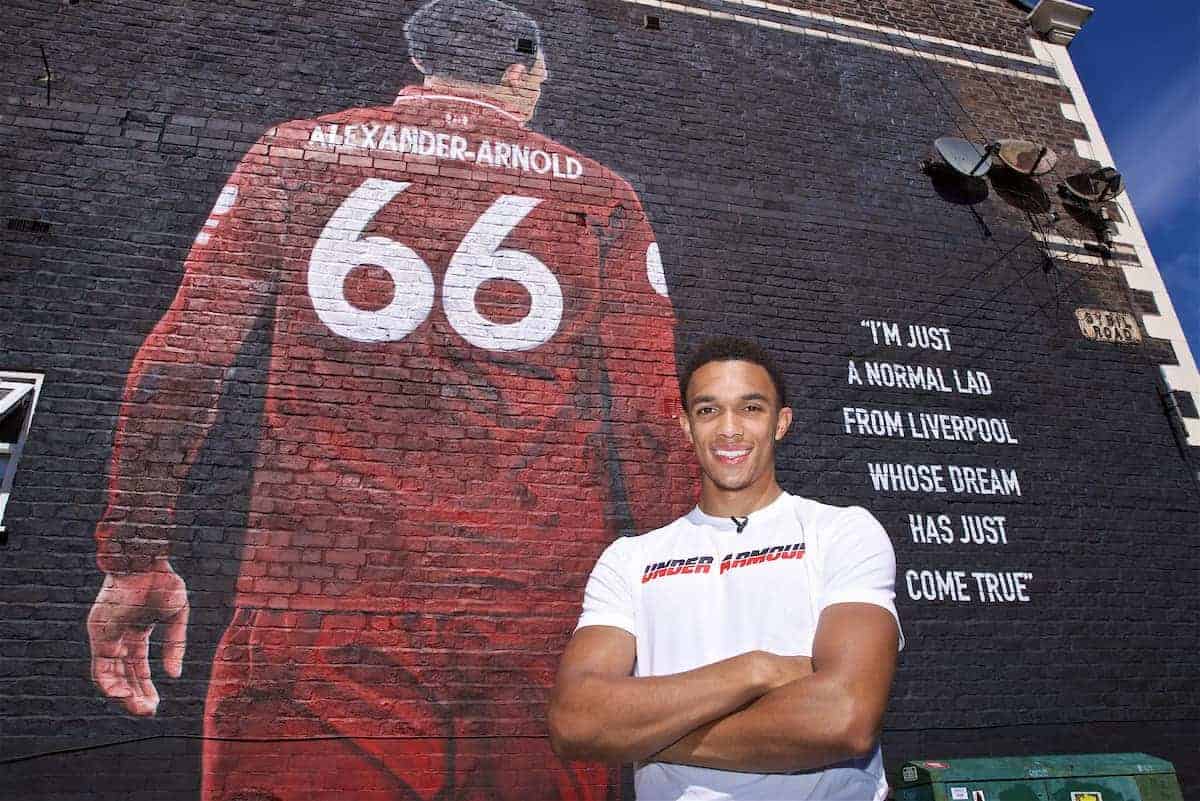 Trent Alexander-Arnold has welcomed comparisons with Kevin De Bruyne, David Beckham and Steven Gerrard, but insists he is focused on being his own player.

The 21-year-old has also been compared to Beckham in terms of his delivery from out wide, while his breakthrough at Liverpool, from Kirkby to the European Cup, has drawn parallels with that of Gerrard.

Having already achieved so much at such a young age, the focus for those outside of Anfield will be on what is next for Alexander-Arnold.

But addressing Carragher’s claims in a press conference on Tuesday, he stressed that he is set on his own path, rather than attempting to emulate others.

“I’m a defender first and foremost, and then obviously I want to try and help the team create chances,” he explained.

“Different positions, different type of players, but that’s his point of view.

“Maybe one day that will happen, who knows, but for now the manager’s decided that I’m a right-back and that’s where I play.

“I’m really not fussed where I play, I just want to play football and if the manager decides that he wants to use me in midfield or centre-back or striker, that’s where I’ll play.”

Asked which player he looked up to most as a youngster, the No. 66 predictably opted for Gerrard, his boyhood hero and the most legendary figure at Liverpool in his lifetime.

But again, he insisted he did not attempt to work in any aspect of Gerrard’s technique into his own game, explaining that his qualities have developed “naturally.”

“Everything about his game I always admired,” he said.

“I always studied him and wanted to be like him, so if I had to pick a player it would be him.

“I never thought ‘I want to cross a ball like that’, it just happened naturally. I’ve just developed it into a decent trait.

“That’s what I try to do, it’s probably the best asset for me going forward, so I try and use it as much as I can.”

Like Gerrard, Alexander-Arnold has assumed free-kick duties relatively early at Liverpool, with the right-back sharing the responsibility with Mohamed Salah.

“I feel as though if someone feels confident to take a free-kick or a set-piece, then they should.

“I always feel confident stepping up and putting a decent ball into the box.”

Alexander-Arnold is already widely considered one of the best young players in world football, and having only turned 21 on Monday, the potential for him to grow even further is vast.

To achieve his goal of becoming one of the world’s best, the Scouser believes he should continue to avoid comparisons in terms of style of play, instead using the likes of De Bruyne and Gerrard as inspiration for his mentality.

“I think if you do want to be in the best in the world, you need to have an open mind,” he said.

“So it’s not maybe that important to compare, because at a young age you haven’t achieved the things that those types of players have.

“For now it’s about having an open mind and wanting to achieve those levels, wanting to be that type of player, wanting to reach the levels that they’ve reached.

“To be regarded in the same bracket as them is something that the best players want.”