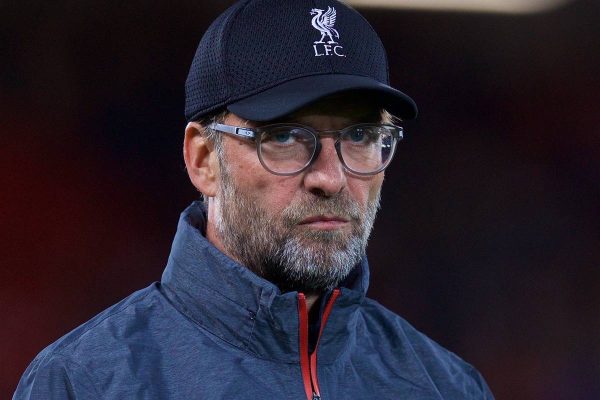 Liverpool let a three-goal lead slip as they clawed out a 4-3 win over Salzburg in the Champions League, which Jurgen Klopp described as “typical Liverpool.”

It seemed close to the Reds of old on Wednesday night as, after an early, mesmeric blitz that brought goals from Sadio Mane, Andy Robertson and Mohamed Salah, it was 3-3 on the hour.

Fortunately, a change in formation and the persistence of Klopp’s attack allowed Roberto Firmino to nod Salah through for his second and a late winner in front of the Kop, but it was far from a comfortable night.

Klopp described this, in his post-match press conference, as “typical Liverpool,” with the manager adamant that lessons would need to be learned.

“Other teams maybe break down after 3-0 at Anfield, but they were not really bothered,” he told reporters.

“It was a very important lesson for us tonight but I prefer massively to learn it in the game than to learn if after the game, because if we had lost 4-3 it would have been the same lesson.

“I knew before that we have to improve a lot, but now everybody knows it.”

He explained that Salzburg’s change to a 4-4-2 diamond in the second half, including the introduction of goalscorer Erling Braut Haaland, left his side flat-footed.

And Klopp said there are “a lot of things to improve,” on the back of that display, resolving that “we will learn, but we have to learn quick.”

“That we showed character? I am the last to be surprised by that,” he added, confidently.

“That’s why I was not overly concerned at the moment of 3-3 because I knew we would have moments again.

“It would be silly if that were not possible because we did so many good things so we should not lose complete faith in ourselves in the moment when it becomes a bit difficult.”

That switch to a 4-2-3-1 countered Salzburg’s own shakeup, with the introduction of Divock Origi allowing Firmino to drop into the No. 10 role as Salah moved up front.

It was a similar case at Sheffield United on Saturday, but unlike that afternoon at Bramall Lane, the Reds were not so assured at the back, and this led Klopp to the upcoming visit of Leicester.

“It was far away from perfect but it was a typical Liverpool game—very exciting!” he assessed.

“I’m sure Brendan Rodgers will think if we defend like that Jamie Vardy will run around our goalkeeper and score five times.”

In many ways, the way in which Liverpool responded to Salzburg’s comeback in order to take the three points was not the “typical Liverpool” many will be recalling.

It was not the ramshackle Reds on the Rodgers era, or the early Klopp years, but instead the more composed, multifaceted side that has established itself among Europe’s elite.

This is why Klopp wasn’t “surprised” with Salah’s winner, and perhaps why his anger swiftly subsided and he was able to joke as he looks toward arguably the toughest challenge of the season yet against the Foxes.