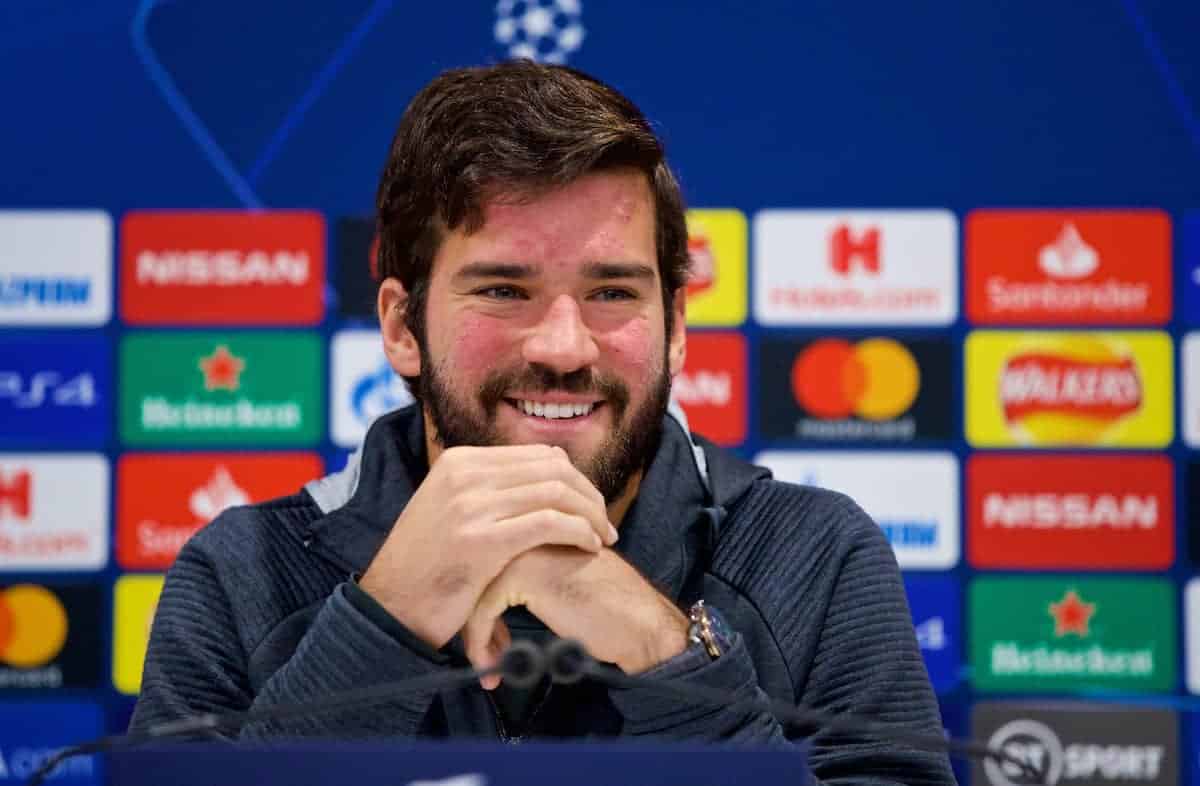 Alisson has highlighted his performance against Aston Villa as an indication he is nearing his best, and believes Liverpool can cope without Joel Matip.

Alisson made his fifth start of the season as the Reds fought back from a one-goal deficit to win 2-1 at Villa Park, with the Brazilian unable to keep out Trezeguet’s opener.

It was a goal that he described as “stupid,” with his back line caught out on a very rare occasion from a set-piece, but despite failing to keep a clean sheet his display could be considered positive.

Speaking before his return to European nights at Anfield as Liverpool host Genk, the 27-year-old explained how his afternoon in the West Midlands was indicative of his improving sharpness after a long layoff.

“Yeah, I feel good, from the first game that I played against Manchester [United],” he told reporters.

“Obviously some things just come with playing matches and I think now I start to be more confident again.

“The last game, I didn’t work too much but I did important interventions, some clearances in the second half in some moments of counter-attack.

“I think these are the most difficult things to have when you are not playing for a long time.

“I know I can do better and I’m working hard for that. I’ll try to do everything better as soon as possible and when I have more work to do also.”

Liverpool are yet to start a competitive game this season with what is widely considered their strongest possible XI, with Alisson and Matip unable to start together since the Community Shield due to injury problems.

It is Matip who is currently sidelined, with the centre-back not expected back until after the November international break.

But the No. 1 believes that, despite the quality of Virgil van Dijk‘s first-choice partner, the Reds are well-placed to thrive in his absence.

“We are not a weaker side when he’s not playing but, yes, we miss him,” he continued.

“He is a very good player, a player who helped us a lot last season, winning the Champions League.

“A player who when he is on the pitch gives us confidence, in aerial duels also.

“But Dejan is doing really, really well when he is playing, we also have Joe who is a top player. He is also young and has good potential to become a top player.

“We miss him but we are as strong now as when we have him.”

Alisson also discussed VAR, Sadio Mane, his annoyance at a lack of clean sheets, the injury to Everton‘s Andre Gomes and Simon Mignolet in a press conference that is well worth watching.