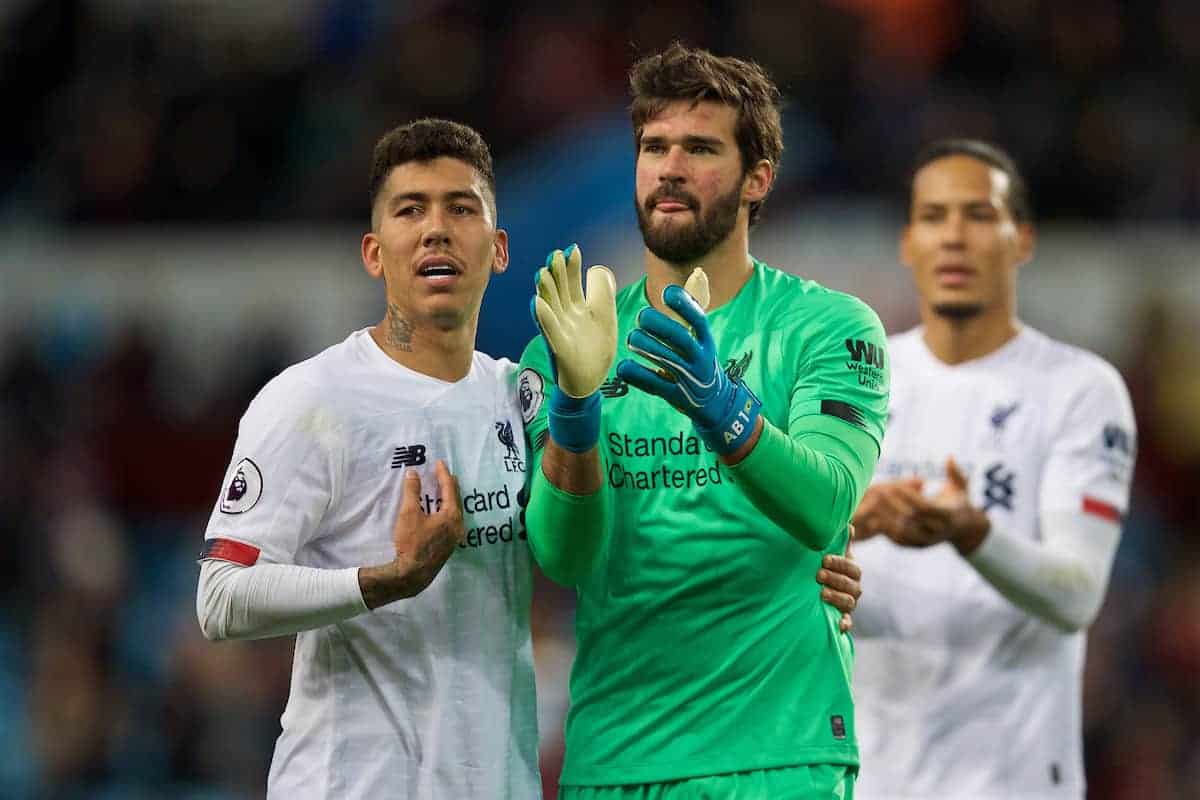 Liverpool scored twice at the death to successfully come from behind to secure a 2-1 win at Aston Villa, and fans lauded their mentality giants.

Jurgen Klopp’s Reds made the trip to Villa Park with securing a 10th Premier League win firmly on their minds.

But it was a sloppy start from Liverpool and Villa took advantage having overloaded the Reds at the back post from a wide set-piece, with Trezeguet the beneficiary.

VAR emerged as a major talking point in the opening 45 as Roberto Firmino’s effort from close range was deemed offside and failed to be overturned, in what was a rare sight on goal for the Reds.

The second half saw Liverpool dominate territory as they pushed for an all-important equaliser, and just when it appeared as though the breakthrough would not arrive Andy Robertson popped up to head home.

And while many would have settled for a draw, Liverpool pushed on and found a way to win with Sadio Mane dispatching Trent Alexander-Arnold‘s corner to secure an invaluable three points.

Robertson's equaliser was glorious, by the way. Few sights better than a full-back steaming in at the back post with a bullet header.

This is incredible. All three of Liverpool’s games this week have been too close for comfort. Flair for the dramatics or what.

“What a damn fine header, what a run, what a pass, and Robertson crushes it in.”

– Magnus on the forums.

Mané is single-handedly carrying this title challenge this season. I absolutely adore him.

“These last-minute goals are 1000 ways to die. So emotional…”

Case for Sadio Mane as having the best attacking heading technique in the league. #LFC

VAR & refereeing decisions emerged as a major talking point once more, for all the wrong reasons…

Firmino has had a goal disallowed for offside. He wasn’t offside but VAR decided he was offside. When it comes to VAR I’m now offside.

Firmino's nipple, or something, deemed offside by an inconclusive VAR graphic. VAR will surely improve but at the moment it seems so pedantic and imperfect.

Firmino’s nasal hair was offside there. A clear advantage for Liverpool.

“If when VAR checks it’s that close it should go with the attacking side. No way they can measure from TV screens down to a few cms. Too arbitrary where the lines are drawn. ‘Happy’ there’s was given as it was so close, same with ours.”

Understand the frustration with players throwing themselves to the ground but Salah stayed on his feet despite being manhandled in the box and doesn’t get the decision.

Remember when everyone said VAR was going to benefit us?

There was no shying away from an overall poor performance, as areas for improvement were noted…

Forget VAR for now, we’ve been crap there. The organisation for the free-kick we conceded from was a shambles, midfielders are getting over run and out muscles and the front three have forgot how to pass and shoot.

Incredible how bad Liverpool's decision-making and final ball have been today.

#LFC are playing against a well-organised, dynamic, relentless Aston Villa side as well as against themselves – some of their decision-making has been staggeringly poor

But the mentality monsters were back at it, however, and fans were in awe once more…

When United were great under Ferguson they pulled off this sort of stuff all the time, and it was absolutely sickening. Fucking magic isn't it lads. Absolutely magic.

Never in my life seen a Liverpool team with this much character. Absolutely fearless, never know when they're beaten. pic.twitter.com/o9ol7fM2Om

Not going to lie, I thought we weren't going to turn this one around. Absolutely unbelievable mentality from our lads again. I was gutted when I heard that Walker had scored a late winner for City, but imagine how they are feeling now.

What a comeback from Liverpool, they just do not give up! This side is filled with skill, self belief and determination – a machine.

What a team. What a winning mentality. The worst Liverpool have played in a long, long time, and yet – once again – somehow find a way to win.

That was the definition of a win of champions. Wow

A gigantic final 10 mins from #LFC – and Sadio Mane in particular with a sublime assist and deft match-winning header – to showcase their powers of recovery again. On a difficult afternoon, several levels below their best and against a very determined Villa, it is A Big, Big Win