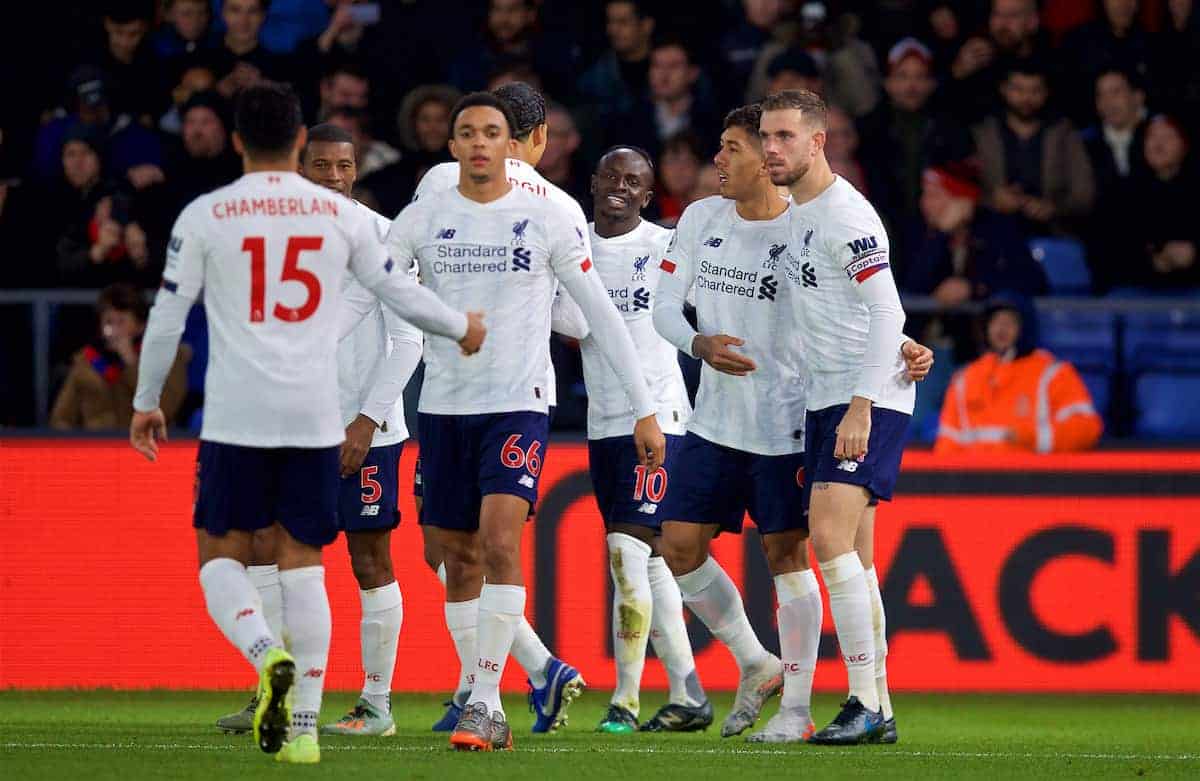 For Liverpool’s players it was a case of acknowledging the tough challenge presented by Crystal Palace, but celebrating their perseverance in the 2-1 win.

The Reds’ return from international action saw them make the trip south to Selhurst Park, where a win would ensure they remained eight points clear at the summit, at the very least.

But it was a poor opening half for Jurgen Klopp‘s side as they struggled to find their rhythm, and they almost paid the price as James Tomkins found the net – only for VAR to correctly intervene for a foul on Dejan Lovren.

It was the necessary wake up call, however, as three minutes after the interval, Sadio Mane put Liverpool in front with his fifth goal in as many games against the Eagles.

And while Liverpool had chances to wrap up the three points, Wilfried Zaha was the next to find the scoresheet to leave the Reds with eight minutes to find a response.

They did just that through Roberto Firmino merely three minutes later, ensuring all three points returned to Merseyside.

And for Virgil van Dijk, when speaking to LFCTV after the final whistle, the result was “very important,” as was Liverpool’s continued ability to respond to setbacks.

The Dutchman also spoke of how tough it can be to quickly readjust from international to domestic action, but at the end of the day the win was “the most important thing.”

“Everyone knows how tough it is to come here against a well-organised side, after the international break and obviously we’re very happy with the three points.

“We only trained two or three times maximum with all of the players, but we had to be ready for today and everyone knew how tough it could be.

“We had opportunities to score the second and make it a little bit easier but we won and that’s the most important thing.

“If you’re prepared to suffer setbacks because in the games that will happen, it’s about how you react and so far we’ve been doing it really well.”

Similarly, Trent Alexander-Arnold was delighted with the Reds’ show of resilience as his side continued to prove that they can deal with “whatever people throw at us.”

“We’ve been showing [our character] through the course of the season and even last season we showed the team spirit and resilience.

“We had a setback today with the goal and bounced back straight away, we showed our quality.

“Our performance wasn’t the best but at the end of the day, it’s not the performance that gets you the three points it’s the resilience and the hard work that you put in out there.

“We’ve showed that whatever people throw at us that we can deal with it and bounce back and prove why we’re such a solid team.”

After the final whistle, the squad took to Instagram to celebrate another three points in the bag on a tough afternoon.

Andy Robertson, who set up the opening goal, was quick to laud Firmino for notching the winner, while the man himself was overjoyed with another “important win”:

For James Milner and Trent, it was a case of praising the spirit from the side and the fact “the run goes on”:

Dug in deep. The run goes on ?

Meanwhile, Jordan Henderson and Van Dijk left it short and sweet as they celebrated a “big three points”:

And Gini Wijnaldum, Dejan Lovren and Mane lauded the travelling Kop and shared their delight at picking up the win against a tough Palace outfit:

Picking up where we left off, +3 points ??We keep fighting ??

Tough game against Palace, but what matters are the big 3 points. Thanks to our supporters who came today ?? Have a safe trip back home ??

Really difficult game but we definitely deserve the 3points!! The support was amazing thanks everyone ??

While Liverpool were far from their best on Saturday, the win keeps the points tally rolling over and the morale at a high.

A congested period now awaits Klopp and his chargers as they are set for nine games in 24 days, starting with Napoli on Wednesday evening where a win would secure a place in the knockout stage of the Champions League.